This week, the Metropolitan Opera invites you to get your Ring on.

The company is streaming videos of its legendary 1990 presentation of Richard Wagner’s stupendous tetralogy Der Ring des Nibelungen free on the Met Opera website as part of a week-long festival of the composer’s works. The four related but self-contained operas arrive Wednesday October 7 through Saturday October 10, with each installment available for a 24-hour window.

The work could be described in an oversimplified way as “Lord of the Ring for adults,” a drama of intrigue in which mortals and supernatural beings grapple over ownership of a magical band of gold that confers mastery over the world. What sets the Wagner apart is its intricately thoughtful analysis of how ambition for power is always ultimately destructive.

Though the Ring does offer moments of breathtaking visual spectacle—the procession of the gods over a rainbow bridge to their fortress Valhalla is beautifully realized by director Otto Schenk—the emphasis is less on what happens in real time and more on the psychological and moral meaning of those events.

By far the best thing about this version of the Ring is the participation of the late dramatic soprano Hildegard Behrens in the central role of Brünnhilde, the disgraced Valkyrie who learns compassion. Yes, her singing is sometimes less than luxurious, but especially in video closeup the entire drama seems reflected on her face.

In a long scene in the second act of Die Walküre, the god Wotan confesses his complicity in the theft of the magic ring. Bass James Morris sings this scene with vocal beauty and sound musicality, but the focus is (as it should be) on Behrens’ listening Brünnhilde as she slowly comprehends and ponders the complex morality of Wotan’s actions.

As in another, more recent time-intensive tetralogy, the Avengers film series, the action of the Ring includes the death of a hero, self-sacrifice, the end of one universe and the beginning of another. All this should happen sometime not too long before midnight on Saturday, when the combination of Behrens’ electric performance, the Met’s spectacular special effects, and, above all, Wagner’s transcendent music bring the 15 hours of the Ring to its redemptive close.

If all this makes the experience sound demanding, you’re right. It’s so involving that the composer deliberately chose the less than picturesque Bavarian village of Bayreuth as the venue for its premiere in 1876. To this day, performances at the Bayreuth Festival are treated as the sole focus of one’s day, the audience’s minds undistracted by work or sightseeing.

And so in a way social distancing is an optimal circumstance for the viewing of the Met’s Ring. When better than in a time of uncertainty and danger to step back and devote yourself to consideration of the meaning of life? 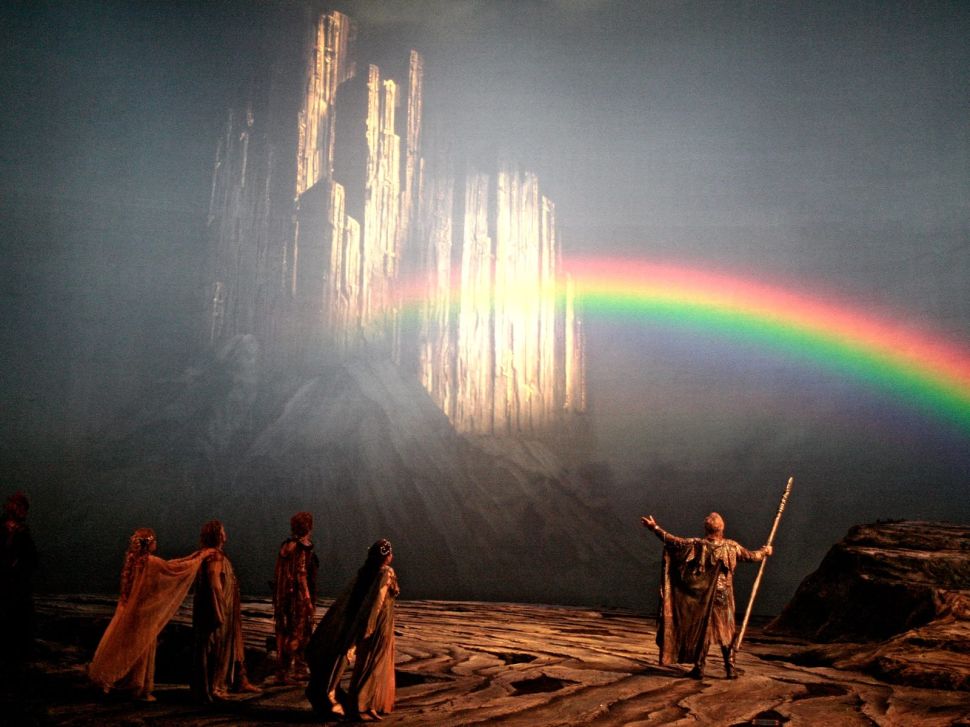