In the opening scene of First Blood, a hopeful John Rambo (Sylvester Stallone) tries to reconnect with a friend, Delmore, from his unit in Vietnam. He finds Delmore’s wife, who tells him her husband died of cancer caused by Agent Orange. “Cut him down to nothing,” she says. “I could lift him off the sheet.” Rambo is stunned and grief-stricken. “I’m sorry,” he says quietly, and hands her a photo of her husband from Vietnam before trudging back into the hills.

In contrast, the new Mortal Kombat 11 trailer featuring Rambo shows the character, still voiced by Stallone, striding into a forest, pulling out a machine gun, and gleefully gunning down other characters before bellowing in rage. A story about poignant loss and the US government’s indifference to the suffering of its soldiers has been transformed into an empty-headed celebration of bloodlust and gore. It’s an object lesson in the way that pop culture’s love of violence can eat away at and evacuate, any effort to demure from the logic of war, reducing them to nothing, just like Delmore.

Rambo was initially invented by author David Morrell, whose 1972 novel First Blood inspired the 1982 film and the Rambo franchise it spawned. Morrell’s novel doesn’t include the melancholy vignette in which Rambo learns of Delmore’s death. But that sequence neatly captures the book’s themes and concerns. In an introduction to a recent edition, Morrell explains that he wanted to “write a novel in which the Vietnam War literally came home to America,” and which “shoved the brutality of the war right under our noses.”

The sad opening scene of First Blood does just that; Rambo has come home from the war, but the war has come with him. Cancer and grief are more implacable than the Viet Cong. They aren’t foes you can escape by coming to America. Rambo here isn’t an invulnerable warrior; on the contrary, the whole point of the scene is to underline the vulnerability of veterans. Delmore was a huge man; cancer took away most of him, and the all of him. Rambo himself is a quiet, soft-spoken, confused and lost soul. War and cancer haven’t killed him. But they’ve defeated him nonetheless.

This is one way of bringing the war home. Morrell’s book, and the rest of the movie First Blood, though, generally adopt a more literal approach. Rambo is passing through a small town when the sheriff hassles him. Angered, and prompted in part by PTSD flashbacks, he escapes, and begins to wage a one-man war on law enforcement, using the skills he learned while fighting overseas. The movie becomes a kind of revenge fantasy against the civilians and the country which ruined Rambo’s life and took Delmore’s. Rambo, rising from camouflage in the forest, metaphorically becomes Vietnam, transplanted from southeast Asia to the United States. Noncombatants at home need to know what it was really like for veterans, the film suggests. Then perhaps they wouldn’t be so eager to send them into combat and abandon them.

Sympathizing with veterans can mean taking action to end conflicts, so people do not have to fight and die for dubious causes. But more often in popular discourse it means doubling down on war, or spending more resources to allow our boys to win. First Blood is ambivalent. Rambo’s trauma is ugly and sad, but at the same time his capacity for carnage provides opportunities for a lot of exciting pulp violence.

The rest of the franchise famously leaves the sadness behind to embrace its most extreme imperialist fantasies of destruction. Rambo: First Blood Part II sends Rambo (somehow no longer suffering from flashbacks) back to Vietnam to rescue veterans. The film glories in scenes of Rambo blasting away at Vietnamese people, healing America not by forswearing war, but by doing even more war to make up for America’s humiliating defeat. Delmore is forgotten; American soldiers are no longer husbands and fathers whose deaths leave behind quiet grief. They’re invulnerable killing machines to be cheered on as they spread death.

The new Mortal Kombat trailer doesn’t seem to have anything like that kind of consciously reactionary political content.  Rambo shoots up some other new characters like Rain and Mileena in typical scenes of video game violence. He’s just another bad ass killer, engaged in some fun virtual brutality.

I’m not opposed to action movies, empowerment fantasies or uber-violence; it’s fun to imagine you’re strong and can solve all your problems by hitting things extremely hard. But John Rambo initially meant something different. First Blood, at least fitfully, tried to think about the ways that soldiers are people, not fantasies, and that their country owes them not more violence, but peace. Mortal Kombat Rambo, striding through the jungle, is an object lesson in how reluctant we are to imagine an end to war. 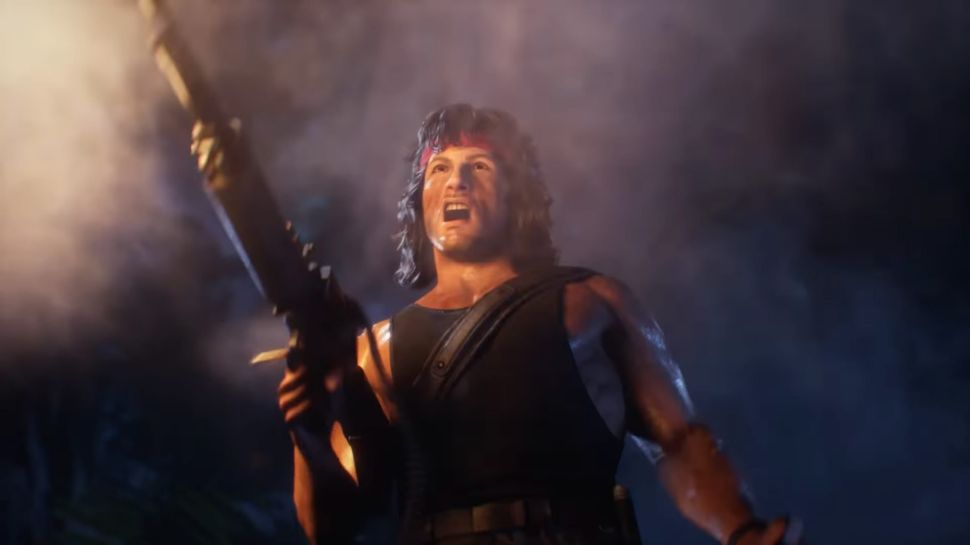