After Netflix saw NBCUniversal spend $500 million to reclaim The Office for Peacock in 2021 and WarnerMedia drop $425 million to reclaim Friends for HBO Max, it knew it had to replace those beloved legacy series. So the market-leading streamer committed $500 million-plus to bring Seinfeld from Hulu to its own library. Meanwhile, WarnerMedia wasn’t nearly done with its own spending spree. The company reportedly dropped more than $1 billion for The Big Bang Theory and Two and a Half Men and up to $550 million for the rights to Comedy Central’s South Park. Even Mad Men drove considerable interest on the open market before eventually landing at IMDb TV of all places. In today’s market, streaming services are forced to pay nine-figure premiums for top tier legacy programming in order to stay afloat.

Audiences forget that we’re still in the embryonic stages of the streaming revolution with original direct-to-consumer SVOD programming still in its first decade. The industry remains in its natal Wild Wild West phase with five well-resourced new platforms springing up in the last 11 months alone. Before the rules, regulations and expectations of the so called streaming wars are firmly set in stone, we’re likely to see a few more mega-deals on the horizon.

Why are these licensing deals so massive?

“VODs are acquiring the right to distribute proven shows with quantifiable value,” Matthew Wilson, partner and co-chair of AGG’s Entertainment & Sports industry team, told Observer. “The buyer can do the math in terms of subscription numbers. Rather than pay backend profit participation to the creative parties (producers, actors, writers), the streaming services are paying (or buying out) those rights on the front end for a fixed amount. The resulting payment model frontloads the payments and pads the overall aggregate fee.”

Streaming doesn’t work like traditional entertainment. There is no cut of the box office profits or future syndication to be had, which is why the raw purchase totals are so massive upfront. But to the deep-pocketed streaming services like Netflix, Apple and Amazon, it’s money well spent.

You have to remember that $100 million is not a lot in Hollywood dollars, especially when the licensee is acquiring the right to distribute a fully produced series that is a known commodity in the market, Wilson explains. If a series comes with a guaranteed audience that does not require any promotional spending, then there is almost no risk. The cost to develop, produce and promote a new multi-season show will likely run a comparable amount and is much more likely to flop than hit. (Just look at all the recent cancellations as a result of a harsh cost-reward calculation).

“It’s like buying the Lakers with LeBron James and the trophy for a single flat fee,” Wilson said.

In today’s streaming wars, platforms have to pay to play, especially as the SVOD field sees an influx of new competition. The best way to attract eyeballs and long-term subscribers is by securing the exclusive right to distribute an existing show with a dedicated audience.

Which TV show will spark the next streaming bidding war?

According to Reelgood, a streaming aggregator that tracks every TV show and movie available online for its 2 million-plus U.S. users, here are the 10 most-watched licensed TV series of the last three months. 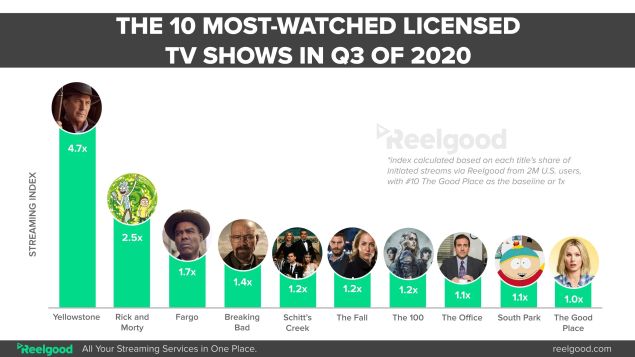 Most of these series already have homes for the immediate future. Peacock is reaping the benefits of cable’s most-watched series with Yellowstone sitting comfortably in its library. Rick and Morty, an Adult Swim production, will remain with parent company WarnerMedia on HBO Max. With Disney purchasing Fox and Hulu, Fargo isn’t leaving FX on Hulu ever again.

Breaking Bad, which has streamed exclusively on Netflix for more than a decade, is an intriguing candidate. Sony TV provides Netflix with a bundle of content (it owns The Crown), but its movie output deal with the streamer expires in 2021. If its TV pact is operating on the same timetable, it would be a golden opportunity to further cash in on arguably Peak TV’s greatest series. Breaking Bad is already Sony’s most profitable creation and would fetch a hefty total in free agency.

Though AMC’s The Walking Dead has seen its ratings decline for multiple seasons, it still remains one of cable’s most-watched offerings. After nine years on Netflix, Dead producers may be curious about what else is out there. Last year, AMC Networks CEO Josh Sapan told Variety they would evaluate licensing deals on a case-by-case basis moving forward to generate the highest return. With a back catalog of 10 attention-grabbing seasons, The Walking Dead is an attractive target for hungry streamers. Other viable candidates not listed above that could demand high totals if/when they become available in the near future include Everybody Loves Raymond, This Is Us, NCIS and Supernatural.

In the coming years, expect to see greater turnover in terms of where in-demand licensed series reside. Wilson argues that the long-term deals that have kept certain series on the same streamer for close to a decade are relics of the past. Studios and content owners don’t want to grant multi-year exclusive deals anymore because “they now have, or will soon have, their own streaming services” and “market dynamics and robust competition heavily favor the content owners and there is simply no need to lockdown a property unnecessarily.”

This trajectory of increasingly expensive licensing acquisitions will eventually flatten out as the streaming industry normalizes long-term. There is a finite number of must-see legacy programs that attracts the necessary repeat viewing and sustained engagement to demand such unfathomable totals on the open market.

“We are currently living in a window of time in which Gen X and Millennials are old enough to remember watching television during the peak consumption decades (90s and 00s) and are now driving the streaming market,” Wilson said. “This is why the megahit shows like Seinfeld, Friends and The Office have such a long shelf-life and can command enormous license fees. The ubiquitous appeal of individual television shows is not something we will ever see like that again. As such, the bidding wars and demand that we are currently seeing will decrease over time.” 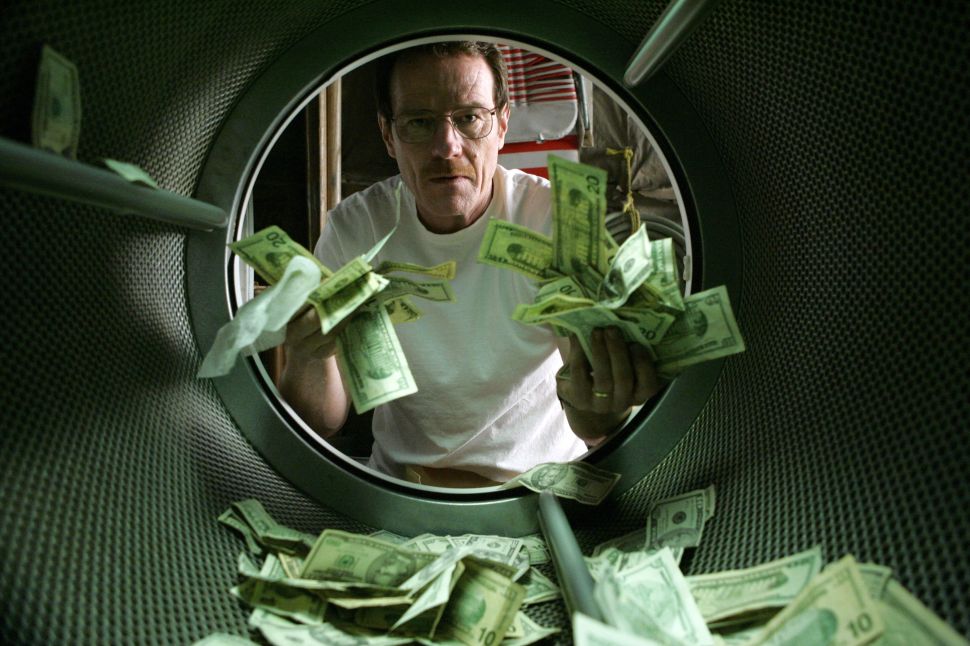