In a 2019 PCMag survey, 38% of respondents listed movie availability as the most important factor when deciding which streaming services to subscribe to. Clearly, Netflix has taken that sentiment to heart. The market-leading streamer hopes to eventually release 90 original films per year ranging from small indies to $200 million blockbusters. Amid the coronavirus pandemic, Netflix’s star-studded flicks have largely replaced traditional moviegoing for the time being.

While we can’t point to box office data to determine which of these flicks were the most popular, we can still explore the relative success of their “opening weekends.”  Reelgood—a streaming aggregator that tracks every TV show and movie available online—tracked the top 10 most-streamed Netflix original films in Q3 across their first three days of availability. What they found is that audiences still love Charlize Theron. 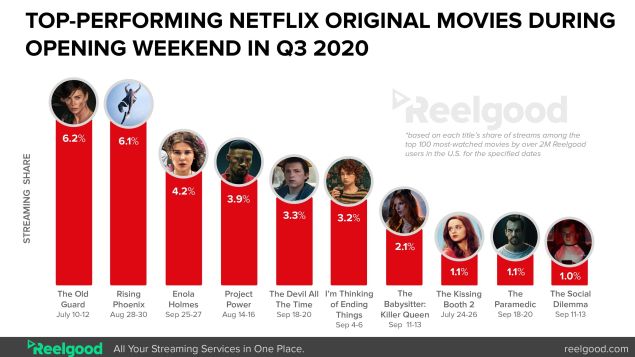 Theron’s immortal warrior action flick The Old Guard drew favorable reviews (81% on Rotten Tomatoes) and continued the actress’ streak of playing badass heroines. If the Chris Hemsworth-led Extraction, which hit the platform in April, could score a sequel order from Netflix, we expect the same treatment for The Old Guard. Rising Phoenix is an inspiring documentary about the top athletes and insiders of the Paralympic Games and how it impacts a global understanding of disability, diversity and excellence. Enola Holmes, which Legendary originally set up for a theatrical release prior to the pandemic, is more than good enough to provide Netflix with its next franchise.

You’ll notice that this top-10 list is a mix of star-driven high-concept action flicks (The Old Guard, Project Power), familiar brands (Enola Holmes), and auteur passion projects (Charlie Kaufman’s I’m Thinking of Ending Things). It will be telling to eventually compare the performance of Aaron Sorkin’s Oscars hopeful The Trial of the Chicago 7, which arrives October 16, to the above films. For now, as the moviegoing public continues to largely stay away from theaters, Netflix and the streaming industry are our go-to providers of fresh movie material.