Netflix’s stock slipped more than 5% in after-hours trading Tuesday following the tech giant’s disappointing Q3 earnings report. The market leading streaming added just 2.2 million new global subscribers after a conservative estimate of 2.5 million. Though Netflix warned that growth would slow following the addition of more than 28 million new subs in the first half of 2020, these results still come in below expectations. As of this writing, the company’s stock stands at $525.42, an 8% dip compared to last week.

In a letter to shareholders, Netflix said that the pandemic and its impact “continues to make projections very uncertain, but as the world hopefully recovers in 2021, we would expect that our growth will revert back to levels similar to pre-COVID.” Thanks to explosive growth earlier this year, Netflix also forecasted that paid net subscriber additions will be down year-over-year in the first half of 2021. The good news is that revenue ($6.44 billion) beat expectations ($6.38 billion) in Q3 and the company isn’t worried about running out of content amid the partial ongoing production shutdown.

Industry experts have poured over the Q3 report and drawn some forward-thinking conclusions for Netflix as the streaming wars heat up.


“Even though we expected slowing user growth in the U.S., its third quarter subscriber numbers and fourth quarter guidance are a cause for concern,” says Jesse Cohen, senior analyst at Investing.com. “Easing COVID-19-related restrictions, combined with intensifying competition, are likely to pressure the stock in the short-term.”

It’s hard to believe fortunes can change so quickly in the streaming industry. Just three short months ago we were all in awe of Netflix’s unprecedented growth spurred by the coronavirus lockdown. While the company still remains in pole position in the streaming industry, Q3 returned us to reality where Netflix’s domestic growth is plateauing amid increased competition. The streamer added just 180,000 new subs in the U.S. and projects 6 million paid net subscribers globally next quarter.

“People who relied on unbridled pandemic-induced subscriber growth are beginning to have second thoughts. It will be hard for the streaming king to repeat a similar or better performance in coming quarters,” Cohen says.

“As we look into this further, performance in Q1 and Q2 was strong, but the estimate for 2.5M subscribers in Q3 was supposed to be the ‘conservative’ view,” says Pierce Crosby, general manager of TradingView. “With only 2.2M in subscribers for the Q3, it’s much worse than traders were expected.” 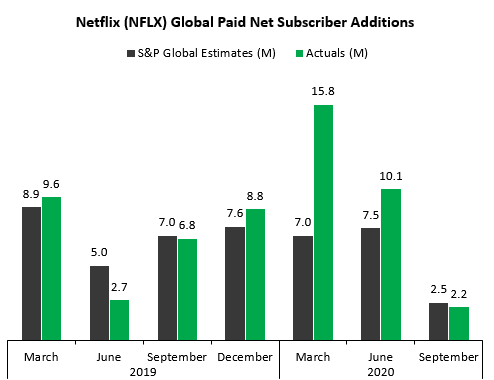 The streaming industry is growing more crowded with well-resourced competition everyday. In the last 11 months alone, five new major competitors have entered the market. Increased competition from Disney+, Peacock, HBO Max, Apple TV+ and the return of live sporting events all likely played a role in Q3’s depressed performance. Normally, Netflix’s greatest advantage in the streaming wars is unrivaled years-long investments in key overseas regions. But even this margin is beginning to thin just a bit.

“Zooming out, this broadly speaks to the domestic competition being put forward by Disney+, Hulu and Amazon, while international providers are also slowing down Netflix’s ambitions to be the #1 in other major markets,” Crosby says. “However, a 5% move is common for Netflix earnings, so the fact that it’s now down more significantly speaks to the Q4 forecast revision, which is still quite positive coming into year-end.”

“Netflix has advantages over competitors”
-Anthony Denier, CEO of Webull

“Since Netflix has been one of the key beneficiaries of the COVID-19 crisis as consumers were spending more time at home with limited entertainment options, it’s interesting that Netflix’s earnings were the biggest miss since the company went public,” Anthony Denier, CEO of Webull.

Netflix’s viewership statistics for its major Q3 releases paint a very interesting picture. Ryan Murphy’s Ratched and Season 2 of The Umbrella Academy were its most-watched original TV series with 48 million member account views and 43 million in its first four weeks of availability, respectively. The issue here is that the former was largely skewered by critics, and neither opened as big as likely hoped.

The Witcher claimed 76 million household views after launching in December 2019 when Netflix had 30 million less subscribers. With the relatively muted reception of Hollywood, Cursed and Ratched, one could easily argue that Netflix hasn’t enjoyed a massively successful premium series launch since The Witcher. Meanwhile, Q3 original films such as The Old Guard (78 million), Project Power (75 million), and The Kissing Booth 2 (66 million) have far surpassed their TV counterparts.

“Traders will be watching how Netflix handles the slower economic recovery and a fading of the first-half rally,” Denier says. “Netflix has advantages over competitors with its deep content library as its competitors face production delays due to the pandemic and that many movies that were made for theaters are now premiering on the platform. The long-term opportunity remains strong as healthy cash flow sets the company up for healthy growth as the economy recovers, and if there is a second wave this winter, the company’s lead in the streaming industry will only drive more consumers towards it.” 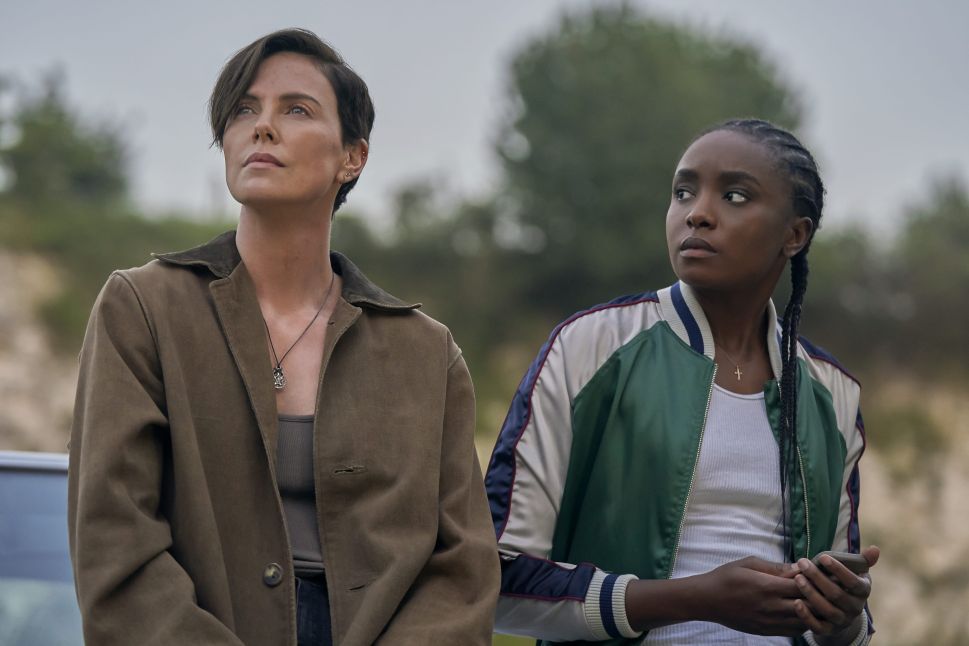