A young girl looks up to the ceiling from her bed late at night. Suddenly, the darkened shadows begin to shimmer. What was once indecipherable blackness morphs into clear and present structures with ghostly hues of light. It’s a chess board and all 16 pieces dart rapidly across the squared battlefield. Attack, counterattack, retreat and redeploy. Endless sequences and possibilities played out in the mind of Anya-Taylor Joy’s young chess prodigy Beth Harmon in Netflix’s The Queen‘s Gambit. It’s an impressive visual motif cooked up by cinematographer Steven Meizler, breathing life into what can otherwise be a stoic board game in the eyes of disinterested onlookers.

Adapted from Walter Tevis’ 1983 novel, Netflix’s upcoming miniseries uses Beth’s ascension through the world chess ranks to mirror her own personal development from troubled orphan to young woman. Slinking through the 1950s and ’60s, creator Scott Frank delves into the connective tissue between genius and madness. We’ve all marveled at tales of supremely gifted prodigies and wondered what we’d do with similar gifts. Here, we are reminded that we might be better off without them.

The Queen’s Gambit is a visual character study thanks to its period setting and nifty cinematography. Taylor-Joy, herself a rising name in Hollywood (who has just been cast as Furiosa in the upcoming prequel to Mad Max: Fury Road), is a woman out of time here, endlessly frustrated with the consideration that she is only extraordinary in her chosen field because of her gender. Taylor-Joy infuses Beth with alternating levels of acidity and aloofness. She yearns for the relatively straightforward algorithmic rules of the chess board in the midst of a turbulent young life. The daughter of a mathematical genius who is undone by her own untreated mental illness, Beth amplifies her natural gifts with tranquilizer pills that enable her to manifest her ghostly chess board every night. She then dulls her pain with a nearly endless supply of booze. These benders serve as momentary intermissions to her single-minded chess obsession. Self-reliant to a fault (“the strongest person is someone not afraid to be alone,” another character tells her), Beth mistakes self-destruction for self-awakening.

As such, she keeps those around her at a distance. Bill Camp, deserving of far more screen time than he’s given here, introduces a 9-year-old Beth to chess during her time at the orphanage and quickly realizes her astounding talent. In his own gruff way, he nurtures that initial spark. Chess rivals turned friends and romantic interests include the kind but self-obsessed Benny (Thomas Brodie-Sangster) and the soft-spoken Harry (Harry Melling). Each arrive and intersect at distinct points in her life. They push her to new levels both professionally and personally even when she isn’t capable of admitting she needs help. Can You Ever Forgive Me? and A Beautiful Day in the Neighborhood director Marielle Heller plays Beth’s adoptive mother Alma Wheatley with a sense of wan sympathy. As a ’60s housewife withheld from her own potential by the times, she is both Beth’s only real connection in the world and a cautionary tale. In their own way, they all represent complimentary pieces on the chess board flanking Beth’s Queen, though it’s up to her to realize their importance.

Part sports story and part addiction drama, The Queen’s Gambit makes use of its quick seven-episode season outside of a bit too much throat-clearing to start. (After a brief in media res opening, Taylor-Joy disappears for the first episode and a half of flashbacks; try to stick through it.) The matches themselves take on various meaning ranging from playful sexual tension to all out war, becoming mini-narratives within the scope of each chapter. Laymen such as myself might not have any actual idea what all the ceaseless chess positioning means, but Frank and Meizler deliver the action in an entertaining yet easily digestible manner.

Regardless of our inner fortitude, detachment and loneliness will hold us back from our true potential. It is the people in our lives that anchor us to the real world, cutting through our obsessions and minimizing the madness we all have within ourselves in one way or another. It’s a lesson only learned through trial and error and Beth sacrifices several pawns en route to this ultimate realization. 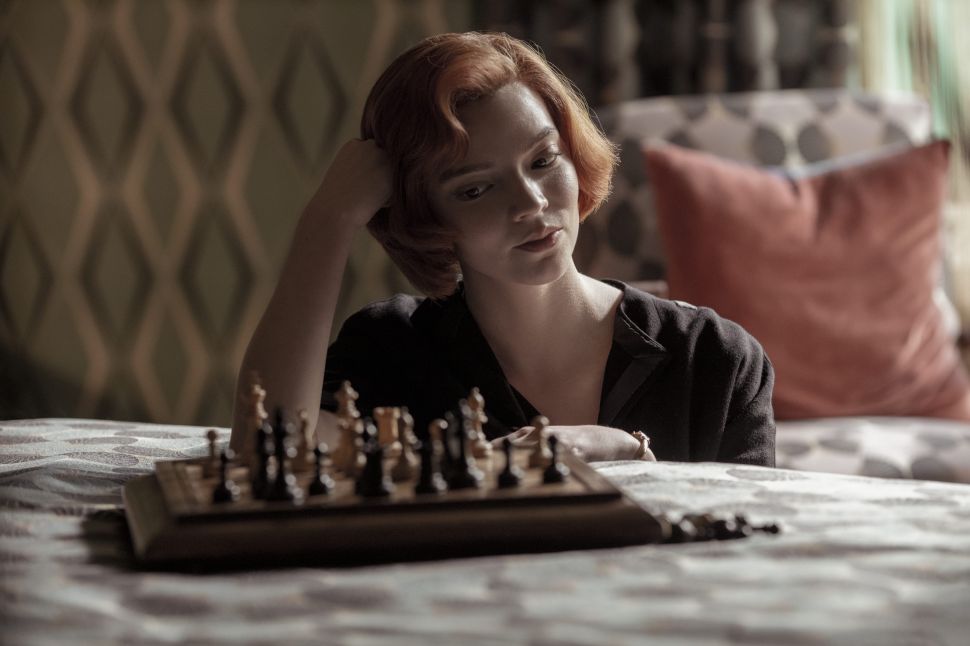