When it comes to British mythology and legends, there is probably no more engrossing legend than King Arthur and his Knights of the Round Table, gallant knights who fight monsters and build the great city of Camelot. But what if Arthur wasn’t a hero at all, but a ruthless despot who persecuted and executed creatures based only on how they look? Enter Guillermo del Toro, who has made a career out of interrogating the past and the notion of the “good old days,” and continues it with his exploration of Arthur in Wizards: Tales of Arcadia.

Part of the Netflix interconnected animated universe Tales of Arcadia, which presents a world of aliens, trolls and magic, Wizards tells the story of a young (if you consider a 900-year-old to be young) wizard named Hisirdoux who gets accidentally gets trapped in the past. More specifically, Hisirdoux (or Douxie) finds himself back in the time of Arthur, where he and his companions will have to find a way back home to fight a magical threat that can destroy the world. The moment they arrive in the woods outside of Camelot, Douxie and his friends find themselves captured and threatened with execution by Arthur’s forces. Their crime? Looking like outsiders and harboring a troll within Arthur’s kingdom. (Did I forget to mention one of the main characters is a human who became half-troll? It’s a complicated world.) The king has dedicated his life to drive magical creatures away from his kingdom and execute anyone left behind.

This is far from the first time del Toro has taken a known and beloved period in history and literature, and turned it on its head to show the horror lurking beneath the myth. He did it with his Oscar-winning film The Shape of , which begins by describing the year before Kennedy’s assassination as “the last days of a fair Prince’s reign.” We are once again going back in time to “good old days,” back to Camelot. The film uses not only the economic prosperity and optimism of early ’60s Americana, but the way people idealized the future, to display the huge inequality in the country.

As author Matt Colville says in a YouTube analysis about the message of The Shape of , the film draws a clear line between modernity and progress, and those left behind by it. The villains are obsessed with the great future that America is headed towards, about their belief in progress, however hollow that may actually be. At one point, Michael Shannon’s character buys a car he wasn’t interested in the second the salesman tells him, “This car is the future.” Meanwhile, the film’s heroes are romantic outcast who know the future being envisioned has no place in it for them. They take the world on its terms and know that the future that is coming has no place in it for them, while the villains all have ideals and a vision for the future. Whether it’s a military commander living in an idyllic version of America, or a young diner employee, they have ideas for how the future should be, and they hold progress in high regards, because that progress doesn’t include anyone who looks different from them.

The moment our heroes get stuck in the past, Wizards draws a very similar conclusion—albeit one in a more kid-friendly outlet. The “monsters” all have realistic features, flaws even. They look like real people, and are treated like real people, like minorities and like outcasts who don’t fit the vision of progress that those in power have in mind. On the other hand, Arthur and his knights look like superheroes, with lustrous hair and huge torsos.

In more traditional representations of the good old days of King Arthur, Camelot is a big and shining castle that promises a bright future, as long as you fit with their ideals. Everyone else belongs in the dark and looming forest, far away yet slowly creeping in, threatening to destroy everything the “good guys” are working towards. It is in the first show of Tales of Arcadia, Trollhunters, that we hear of Arthur, Merlin and the evil Morgana. The last one serving as that show’s ultimate villain. But in Wizards, we actually go back in time and see how things are distorted to fit an image of the past that doesn’t track with reality. While Arthur is a xenophobic despot, Morgana is painted as a tragic figure who fights to defend those who can’t defend themselves, and Arthur nearly kills her for it.

Before The Shape of , del Toro directed the gothic horror film Crimson Peak, where he also set out to interrogate the idea of a prosperous, educated and moral Victorian England. Where many novels of the time hid their sexual innuendo in subtext, Crimson Peak dives directly into the sexual immorality of its aristocratic villains, the siblings and lovers Thomas and Lucille Sharpe. Like the heroes in The Shape of , the main character in Crimson Peak is a hopeless romantic while the villain is obsessed with kickstarting a clay-mining operation in his ancestral home, believing it to be the industry of the future.

For over 30 years, Guillermo del Toro has used the medium of film to tell stories of monsters. Monsters who he credits for saving his life. Monsters he believes are “patron saints of our blissful imperfection.” Whether it’s Kennedy’s “Camelot” or King Arthur’s, del Toro knows that “the good old days” are really about the promise of a bright and prosperous future, a promise that often comes at the expense of people demonized as “monsters” but who nonetheless make the kingdom a place worth living in.

Wizards: Tales of Arcadia is available to stream on Netflix. 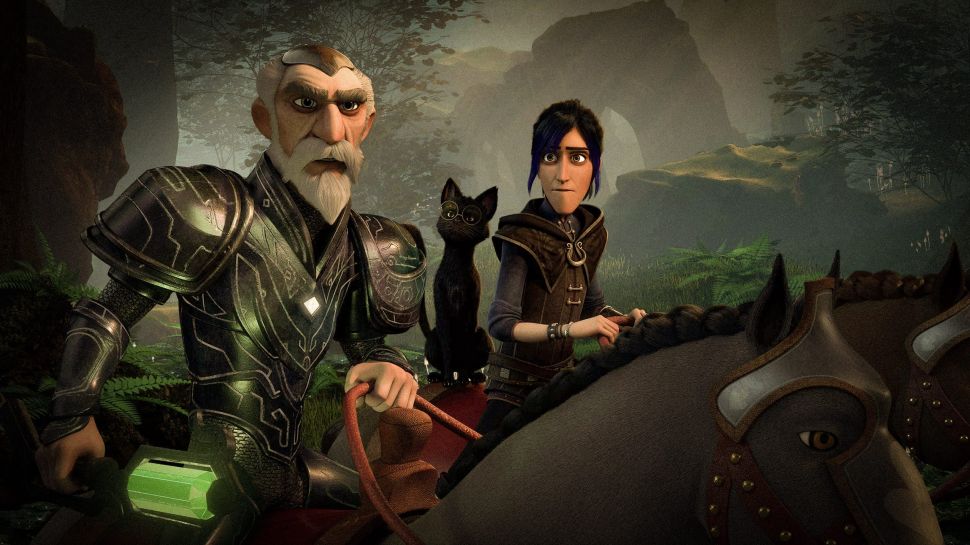