There’s a clip in R.J. Cutler’s new documentary Belushi, which played last week at the AFI Film Festival, where the legendary SNL funnyman describes his 1978 breakout hit Animal House to former The Today Show film critic Gene Shalit as, “A walk down memory lane with a blow torch.”

John Belushi’s quote was on my mind as I watched not only that film, but several other documentaries screening at the festival that sought to reshape and reframe the legacies of iconic figures from our recent past. These included the closing night film My Psychedelic Love Story, Errol Morris’s chronicle of Timothy Leary’s journey from LSD evangelist to FBI informant, as well as Matt Tyrnauer’s multipart The Reagans, which had its world premiere at the festival and provides new perspective on the many ways the political tactics pioneered during the Gipper’s ascension to conservative savior paved the way for the toxic discourse that dominates today’s national politics. (All three documentaries will play on Showtime in November.)

But Belushi’s quip most resonated with me not while watching a documentary, but a scripted narrative: Regina King’s One Night in Miami. After becoming the first film directed by an African American woman to premiere at the Venice Film Festival and then scoring as the runner-up to Chloé Zhao’s Nomadland for the audience award at Toronto, the film served as the AFI Fest’s centerpiece; it screened at a drive-in at a Rose Bowl parking lot, one of the only festival events—which ran from October 15 to 22—that wasn’t virtual.

Making her directorial debut, the Oscar- and Emmy-winning actor employs an attention to craft and detail that speaks more to the use of a finely nebulizing air brush than a blow torch. Still, in capturing a pivotal moment in the radicalization of four towering figures of the African American struggle, King brings a focused heat and contained fire that allows her film to rise above the living museum piece confines of its set up.

Written by Kemp Powers (co-director and co-screenwriter of Pixar’s forthcoming Soul) and based on his one act play, the film is a fictional telling of a real-life event.

On February 25, 1964, the trash-talking heavyweight boxer Cassius Clay (Riverdale’s Eli Goree) shook up the sports world by defeating the 7-to-1 favorite Sonny Liston in a title bout in Miami. Instead of painting the town red to celebrate his victory, the flamboyant Clay—on the cusp of announcing his embrace of Islam and his eventual transformation into Muhammad Ali—retreated to the Overtown hotel room of his spiritual mentor Malcolm X (Kingsley Ben-Adir, the British actor from the second season of The OA who played Barack Obama in Showtime’s The Comey Rule).

Clay and Malcolm are joined by their mutual friends, the Top 40 singer-songwriter Sam Cook (Hamilton’s Tony-winning Leslie Odom Jr.) and the outspoken running back Jim Brown (Aldis Hodge, The Invisible Man), the NFL leading rusher who that year would be named to his sixth All-Pro team. Lest you think the foursome is going get a little too loose, not only is their host a teetotaler (Malcolm offers the fellas some vanilla ice cream), his hotel room is being watched over by a security detail (led by The Wire’s Lance Reddick) assigned by the Nation of Islam.

While the film proudly remains a chamber piece very much in keeping with its roots in the theater, King opens it up in ways that show an innate knack for visual storytelling. She is particularly skilled at teasing out character dynamics between the actors playing these four titanic egos (Ben-Adir’s Malcolm X chides Odom’s Cook over the latter’s desire to appeal to white audiences rather than write an anthem for African Americans) and has a real feel for what makes hanging out after a performance unique.

King and Powers contextualize that evening with a set-up scene for each of the four characters that shows how at risk they were before coming together that night. The filmmakers cap things off with an equally adroit coda that has an air of finality without ever stooping to maudlin foreboding. (Both Sam Cook and Malcolm X would be murdered within a year’s time.)

Both the intro and the outro—as well as a flashback to an ill-fated performance in Boston where Cook may have been sabotaged by his rival Jackie Wilson (Jeremy Pope from Netflix’s Hollywood)—provide platforms for Odom to sing in the style of the “A Change Gonna Come” singer, whose diaphanous yet soulful voice would be called inimitable in every other context but this one. In a truly remarkable performance, Odom does more than simply imitate: he bores into the deep-seeded frustration of a singular artist for whom success was both too much and never enough.

By contrast, the two relative newcomers in the cast, Ben-Adir and Goree, come dangerously close to being overwhelmed by the enormity of playing Malcolm X and Cassius Clay respectively. There are moments when Ben-Adir especially seems to buckle under the weight and begins to loose the thread of his character, who at that moment was on the cusp of being exiled from the Nation of Islam. You are grateful for his director’s sensibility as an actor to keep him grounded in that room and responding to what the other actors are doing from moment to moment.

It is just that in-the-room intimacy—and the complicated ways their love for each other pushes each of them to embrace a more radicalized and vulnerable version of themselves—that makes King’s movie so singular. Sometimes our stories of historical figures definitely require a blow torch; but there are other times when they are better suited to the light from a street lamp shining into a motel room window and illuminating an outsized historical figure’s private and powerful moment of both doubt and empowerment, the kind of moment we never imagined we would ever get the privilege to see.

Editor’s note: Due to an editing error, an earlier version of this review misspelled the name of Kingsley Ben-Adir. We regret the error. 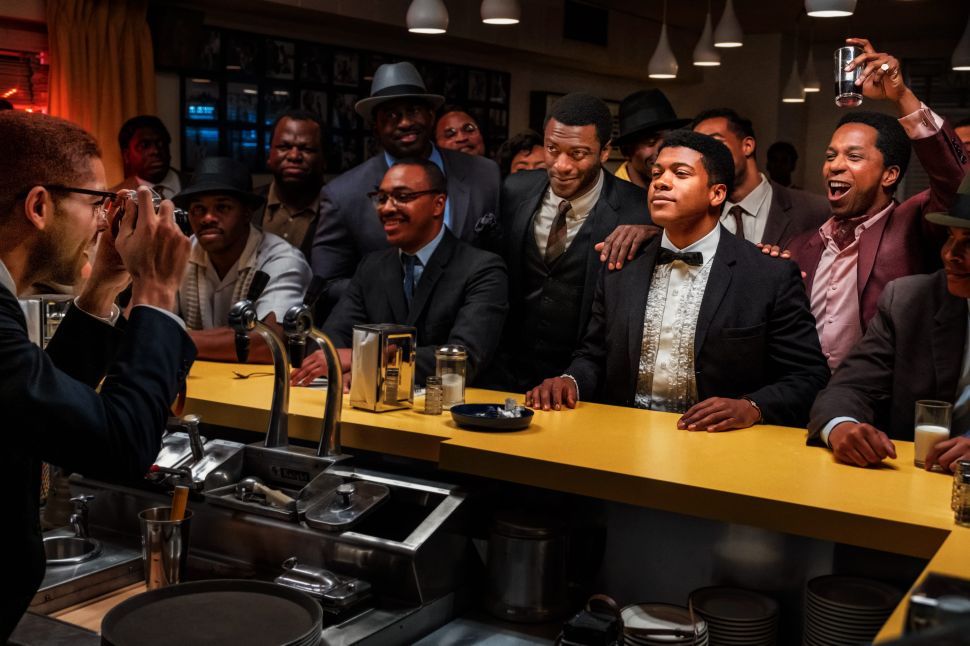