One might think that R.L. Stine himself would be an inherently spooky and mysterious figure. After all, Stine has been keeping kids and teenagers up all night for nearly 30 years as the author of best-selling and bone-chilling series such as Fear Street and, notably, Goosebumps, which became the defining horror anthology of the 1990s. But the honest truth? It’s the complete opposite. Stine (or Bob, as his friends call him) is remarkably warm, incredibly gracious, and also really funny. In fact, his dry sense of humor is something that he relates to horror, in general—the genre has always made him laugh.

When Stine was growing up in Columbus, Ohio, he spent weekends at the movies with his brother. Every Saturday, they’d catch a double bill: Tom & Jerry and a horror film like Tarantula! or The Creature from the Black Lagoon. But Stine never got scared. “There’s something missing in my brain,” he chuckles, speaking to Observer over Skype from his home in Sag Harbor, New York. “When the shark jumps up and starts eating all the teenagers, I’m the one in the movie theater laughing. Everyone else is screaming.”

It’s perhaps why humor has been an important element for Stine to tap into when writing such stories for kids—stories not to traumatize, but unsettling enough to provide a good, fun fright, usually with an ironic ending. The approach, he explains, is like a rollercoaster. “There’s going to be a lot of twists and a lot of turns, and you know it’s going to let you off safe and sound. That’s sort of what Goosebumps books are like. Kids know it’s never going to be too horrifying. I throw in something funny anytime I think a scene is getting too scary just to lighten it up, so they know they’re safe.”

Goosebumps was first published in 1992. The books flew off the shelves and quickly became enormously successful, beloved by even the most reluctant readers. By the mid-’90s, Stine was writing one Goosebumps a month—12 per-year—when his publisher, Scholastic, was approached by Protocol Entertainment to adapt the novels into a television show.

The timing was perfect. In the literature world, horror was already a trending genre for young audiences. It had also become increasingly popular in TV and film with shows like Are You Afraid of the Dark? and Tales from the Cryptkeeper, and movies like Hocus Pocus and The Addams Family. In the latter landscape, Goosebumps, Stine says, differentiated itself by being cleaner, cuter, and younger. It was also unique because the show facilitated an even stronger connection to the books. “Television is an amazing force for getting kids to read,” Stine says. “We saw all these parents and people who [said], ‘Oh, they’re watching too much television.’ Television is an amazing positive force. After the Goosebumps show went on Fox Kids, we started selling a million more books a month. That’s how powerful television was.”

Goosebumps premiered on October 25, 1995, nearly 25 years ago. It ran for four seasons until 1998 and almost every episode was directly based on a book from the series. While the producers chose which story made it to the screen since Stine was still so busy writing the novels—“I would have loved to have written a script or something,” he admits, “but I couldn’t, there was no way,”—his wife, Jane Stine (co-founder of Parachute Press, which helped create the books), was at the forefront making sure the adaptation remained true to the spirit of the text.

“My wife had to argue with people and fight and defend the stories,” Stine says, laughing. “We had to see every script. You had to make sure, since it was Goosebumps, that it didn’t go too far, that it didn’t get too silly, that it wasn’t too grown up, that kind of thing. We were lucky, though, we had such good people working on the show. They really got it. I’ve been so lucky with television because, you know, the series didn’t have to be good. Right? It could have been terrible!”

It became a classic right at the outset, starting with the introduction where a mysteriously cloaked man holding a briefcase, with “R.L. Stine” gilded on the side of it, unleashes the loose pages of his stories and wreaks havoc on the town below. It’s accompanied by a gloriously ominous theme composed by Jack Lenz, with creeping piano, staccato organ, and an orchestral crescendo. “I was thrilled to have a theme song!” Stine exclaims. “I could use it on personal appearances, wherever I went I had that great music. So that was really good. People loved the opening. They always say, ‘Was that really you carrying the briefcase? Was that you?’”

Goosebumps was a Canadian production, filmed at an old Molson brewery in Toronto, Ontario, with an all-Canadian cast (including a fresh-faced Ryan Gosling in the episode “Say Cheese and Die!”). It was cheaper than shooting in the states, plus child labor laws weren’t as strict, which meant the actors could work longer hours. “They were really good kids,” Stine says. “I always loved [that] we’d do [an episode like] ‘The Werewolf of Fever Swamp’ and we’d be down in the Everglades, down in Florida, and everyone had a Canadian accent.” He laughs. “I loved that.”

Stine made it to set often, mostly when he was filming a personalized introduction for primetime features like “The Haunted Mask”—one of his all-time favorite episodes. The story is about a girl, Carly Beth, who gets bullied at school and sets out to get back at her mean classmates on Halloween with a nightmarish green mask she finds at a novelty shop. Only the mask slowly starts to form to her face as it takes on a life of its own. The episode—also the very first of the series—was filmed in the summer, so the crew brought in bags of brown leaves and blanketed the surrounding front lawns with them to emulate the fall season.

“We had this wonderful actress, Kathryn Long, who I was in touch with recently,” Stine continues. Long was nominated for a Gemini Award, which were like the Canadian version of the Emmys, for her role. “Anyway, she had to wear these masks. There were four masks, each one tighter than the last one, because it kept tightening around her face [in the story]. And in the fourth mask, you actually couldn’t breathe. Could only shoot for, like, 30-seconds, 40-seconds, because it was too tight for her to breathe.”

A small creature studio in Toronto, run by Ron Stefaniuk and now called StefFX Studio, created all the masks, as well as all the other monsters in Goosebumps from the gruesome reptilian-like librarian in “The Girl Who Cried Monster” to the toothy fish mutants in “Deep Trouble.” “These guys were incredible,” Stine enthuses, “and we had no budget at all.” One of their most enduringly popular creations is the evil ventriloquist’s dummy, Slappy, who makes his first of three appearances in the TV series in “Night of the Living Dummy II.” Slappy was built as a large, heavy, mechanical puppet and, in some scenes, an actor portrayed the character.

“I just watched ‘Night of the Living Dummy’ and I was amazed at how big Slappy was,” Stine adds. “He’s five feet tall or something. But that’s because they put a guy inside—there were scenes where a guy was wearing the costume and walking around in it. That’s what they did [back then], instead of special effects.”

While Stine says he never experienced any real-life hauntings on the set of Goosebumps (“I wish I had a story!”), he has no shortage of fond, funny moments. During filming “The Cuckoo Clock of Doom,” for example: another favorite episode where the protagonist, Michael, turns a cuckoo clock bird’s head backwards to get his bratty little sister in trouble and inadvertently reverses time—until Michael is a toddler and his sister completely disappears.

“At the very last scene, this little guy had to climb up these blocks in this antique store and reach up to the clock and turn the [bird’s head back] around,” Stine recalls. “And we didn’t know if he could climb it or anything. It was really tense. And we were watching him, he made up to the first block. And then he made it up to the second block. We thought, ‘Oh, man, he’s almost there!’ We were filming. And he made it up to the top and he turned around and he said, ‘I have to pee!’ Ruined the whole shot.”

During its original run on the air, Goosebumps was one of the highest rated children’s shows in the U.S. and Canada. It brought to life stories that helped form the literary foundation for a generation of readers. And it continues to simultaneously creep out and charm new audiences of all ages who discover it today. Stine is still prolifically writing new installments of the books, currently under the title Goosebumps SlappyWorld, and there have been two Goosebumps films starring Jack Black in 2015 and 2018, which, Stine says, completely revitalized the series. A new TV adaptation was recently announced, too, with Neal Moritz, who produced both films, developing it. The show is still in early stages and Stine doesn’t know too many details yet since production is paused due to the pandemic, so whether it’ll be based on the latest Goosebumps books or revisit episodes of the original series remains to be seen. “What’s a nice thing is that kids are still enjoying it,” Stine continues. “I’m just so lucky if I do a book appearance, you know, now I get seven-year olds and 10-year olds and 15- and 30-year olds. It’s pretty amazing. I get to scare a lot of generations.”

The lasting appeal, he considers, likely has to do with how Goosebumps channels our basic human fears.

“People always ask me how kids have changed and how different they are now, but I don’t think they have [changed],” he says. “I think scares always stay the same. The things we’re scared of never really change. What’s changed is the technology, but we’re all still afraid of the dark, afraid of being in some strange place where you don’t belong, afraid that something’s lurking in your closet or under your bed. Those things never change, I think.” 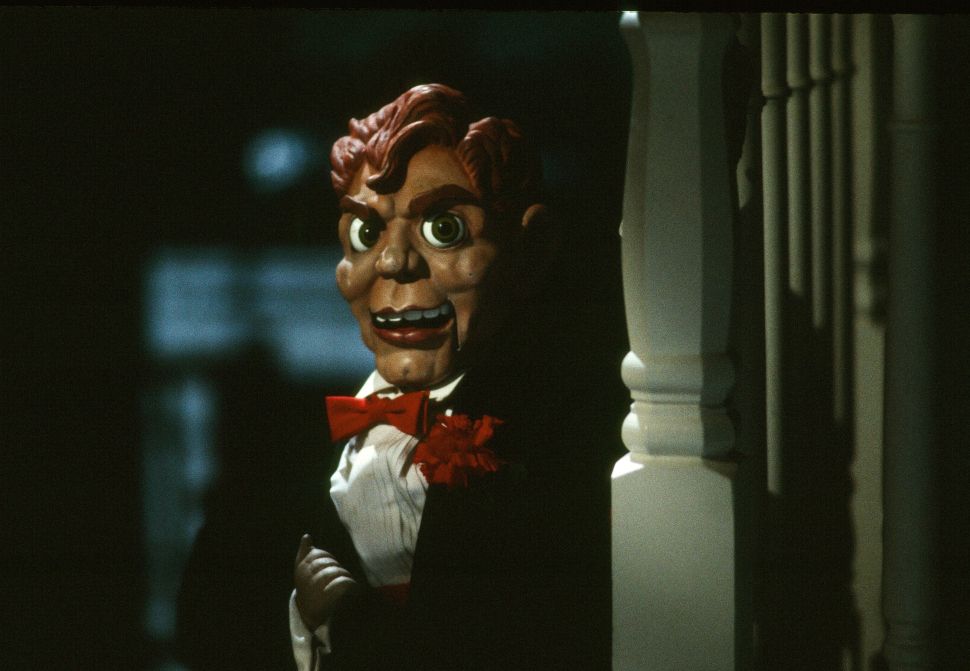