The premiere of the highly anticipated second season of The Mandalorian will arrive on Disney+ at 3:00 am ET Friday, October 30. That’s good news for the Mouse House’s rapidly growing streaming service, which has recently fallen behind its rivals in streaming share despite its gaudy subscriber numbers. Disney+ is not yet flush with must-watch original content that appeals to a wide swath of demographics outside the company’s core kid-friendly target audience. But The Mandalorian, which quickly emerged as the service’s flagship series in Season 1, should again elevate the platform to top-tier status.

The upcoming season is generating a lot of interest according to data firm Parrot Analytics, which tracks TV popularity through social media, fan ratings, and piracy to figure out who’s watching what. Excitement over the show’s connections to the Jedi mythos, Baby Yoda’s origins, and a continuation of key Season 1 elements has it positioned for a strong sophomore effort. And don’t worry, star Pedro Pascal isn’t going anywhere.

Compared to the show’s rookie run last year, Parrot Analytics data pegs audience demand heading into the Season 2 premiere as higher than the same period last year. When the initial spike in demand does occur after the season release, demand will be jumping off from a higher starting point—a good indicator that this season premiere will outperform the previous one. In several markets, The Mandalorian has already become the most in-demand digital original series even before its Season 2 release.

When The Mandalorian debuted last year on November 12, Disney+ was available in just three markets: the U.S., Canada, and the Netherlands. Yet the show’s growing popularity helped to boost the streamer’s international rollout. As of this writing, Disney+ boasts more than 60 million worldwide subscribers.

For the Season 2 premiere, Disney+ is now available in more than 20 markets, mostly in Europe where demand leading into the first episode is high. Audiences here appear to be excited for the global release they missed out on last year when Disney+ had not yet launched in these countries. 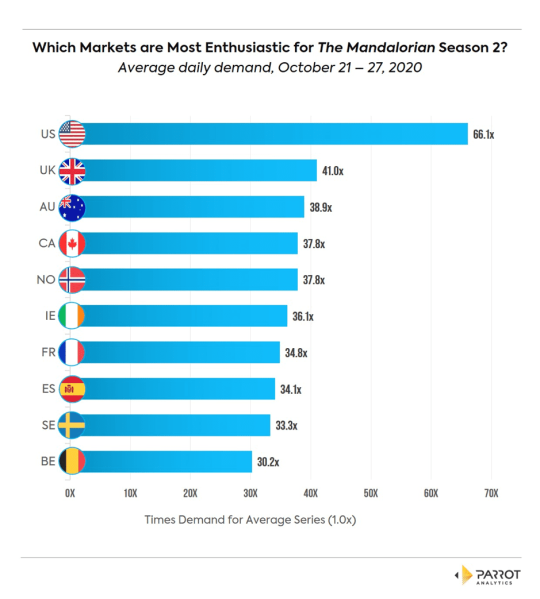 Recently, the opening weekend of The Boys Season 2 on Amazon managed to top the premiere weekend viewership of both The Mandalorian Season 1 and Stranger Things 3, according to data provided to Observer by Reelgood, which tracks every TV show and movie available online. Disney+ executives are surely hoping to wrestle back the crown this time around.

If the pre-release hype is any indication, Disney+ has another season of massive viewership arriving soon. Tack on the upcoming arrival of blockbuster Marvel miniseries WandaVision and Disney+ is poised for a massive Q4 in the streaming wars.