A silhouette appears in the door of a saloon. At the top of a distant hill. At the prow of a ship. His  identity hidden from the world. As quick with his mind as he is with his weapon, the Masked Bandit is more than a man. He is a story, an idea, a creed. And he can bring you in warm, or he can bring you in cold.

The Mandalorian has frequently been compared to movies like True Grit and characters like Clint Eastwood’s The Man With No Name. Star Wars, as a franchise, has always been understood as a science-fiction Western, and The Mandalorian is inspired by Western conventions. However, its eponymous protagonist Din Djarin (Pedro Pascal) doesn’t neatly fit into the American conception of a lone gunman.

The Masked Bandit—a romantic figure in the tradition of The Scarlet Pimpernel, Zorro and Tarsem Singh’s The Fall—allows us to look at the Mandalorian as a critique of heroic masculinity, undermining the expectations for male aggression set by contemporary action films. The Mandalorian subverts popular narratives of vigilantism (which traditionally operate parallel to authority) and instead proposes an alternate, anonymous form of heroism; one which serves his community, family and morals.

The most important feature of the Masked Bandit archetype is the mask itself, which is emblematic of a larger idea, often inherited from a previous owner. The Bandit must also be anti-authoritarian, and an outcast or part of a marginalized group. The Bandit is not motivated by revenge or righteousness, but by a deep love and dedication to honor. Reputation and storytelling are also important; the legend must live on, either through multiplicity or retellings. Lastly, he must be unquestionably cool. There’s got to be a je ne se quois to the Bandit. Whatever it is—drip, vibe, swagger—the Bandit has it.

The Mandalorian turns away from macho individualism and authoritarian heroics often seen in modern vigilante films like The Avengers or John Wick. In Djarin, we have a hero who loves a child, follows a strict set of morals, and actively fights against authority—not only because it’s right, but because his survival directly depends on it.

One of the first, truly modern iterations of a Masked Bandit who took on a disguised double life in order to effect anti-authoritarian change was Sir Percy Blakeney, from Baroness Orczy’s 1905 novel, The Scarlet Pimpernel. Although he didn’t have a literal mask, Blakeney used a multitude of disguises, and his floral calling card became his alter ego.

Pimpernel established many narrative tropes that recur in Masked Bandit novels and stories, and despite the century and a half separating Blakeney from Djarin, many aspects of their stories align. The Scarlet Pimpernel and the Mandalorian are both symbols against injustice, without being active vigilantes. Djarin doesn’t seek out wrongdoing, but he does what is just no matter where he is. Like Blakeney, he treats the people he meets with respect and kindness, but only as much as they show him.

Zorro is another Masked Bandit, one of the most recognizable in pop culture history. There have been many iterations of Zorro over the years since his first appearance in 1919. Zorro has always been a man of the people—a Californian bandit who takes up the mask to protect his community from the colonizers who would seek to take advantage of them.

Like Zorro, Din Djarin is not the sole man to whom the mask belongs. The series’ lore explains that Mandalorians foster their community; adopting and raising orphans in a way similar to how Zorro’s mask is passed down from Don Diego de la Vega to Alejandro Murietta in the Mask of Zorro. The structures that allow for Zorro to be of the people also allow Djarin to be of the people. Without a proper identity outside of the mask, the value is given not to the individual, but to the collective, generated idea of who Zorro—or Mando—is.

Often we see heroes put their personal relationships at risk or on pause when they take up vigilantism. Relationships are seen as weaknesses for superheroes. The Masked Bandit requires both adventure and community, undermining the trope that a hero can only dedicate themselves to justice or the immediate family. It allows our central figure to practice bravery while developing and maintaining emotional bonds that are central to the narrative and strengthen the conviction he displays while wearing the mask and taking public action. The Masked Bandit decentralizes his ego in order to use his skills to benefit communities that he cares for.

Herein lies the romance. While many Bandits experience romantic love, it is love for family and community that matters to them. While we see heroic characters like Tony Stark talk about saving the world, we very rarely see them interact with that world.

In another, more recent take on the character, Tarsem Singh’s The Fall stars Lee Pace as Roy Walker, a stuntman who ends up in a hospital with a broken leg after a stunt gone wrong. As he recovers, he meets a young girl, Alexandria, who has a broken arm. Roy tells her a fantastic story, and we switch perspectives between the hospital and the fantasy world; the actors appear in two roles.

Masked Bandits are, primarily, caretakers—both Blakeney and Zorro are charged with the care of their people, rescuing them from exploitation during times of civil unrest. Both of them are shown with a wife and family. Roy and Mando get adopted by wayward children and immediately imprint. This care is something we don’t often see for men in action films, and as viewers, we can pinpoint the shift on screen. Before meeting the Child, Djarin served mostly selfish needs. But once Mando rescues Baby Yoda, his priorities change.

While most of these examples are men, Eowyn from the Lord of the Rings becomes a Masked Bandit when she puts on a helmet and disguises herself for war despite the fact that she was told to stay behind. When Eowyn puts on her mask, now a helm, she embraces manhood, forsaking gender expectations to serve her country. The helm does not change who she is (as she was shown earlier to be an accomplished swordswoman) but it allows her to act without constraint. Every Bandit reveals their identity, and Eowyn’s “I am no man,” unmasking is one of the most iconic moments in film history. Like Mando, she also takes on a charge. Empathizing with Merry, who was also kept from battle, she lifts him onto her horse and rides them both into the fray. Eowyn’s story hits all the major points of the Masked Bandit archetype, emphasizing the utilitarian masculinity and power the mask gives the wearer in order to protect their people.

The separation between self and Bandit is exceptionally clear in The Fall. Since Roy’s Bandit exists only in storytelling, The Fall places an emphasis on narrative, much like the way that Mandalorians are anonymous by nature, relying on the threat of memory. With each rumor, the reputation of the Bandit grows to fill the imagination of whoever is listening to the story. The narrative control over the Masked Bandit (including Mando) is not owned by the Bandit himself, but by those around him.

Caped crusaders, vigilantes and lone gunmen care more about getting the job done than upholding their status within their communities. Mando, Blakeney and Zorro all care deeply about their reputations, and they are better men for it. The bandits care about their legacy, not for themselves, but for others who have to inherit their mask. They strive to uphold the collective honor, pride and safety, and so the Masked Bandit folktale becomes intrinsic to the plot.

Where masculine heroes in media often uphold systems of power that already serve them, The Masked Bandit, as seen in Djarin, Blakeney, Zorro and Roy, actively dismantles ideas of what a hero can be. By prioritizing their community and family over their own ego, Masked Bandits are able to survive for generations, fighting in the name of progress. The Masked Bandit is not an individual, but an idea that is pitted, very clearly, against the systems of power he exists within. 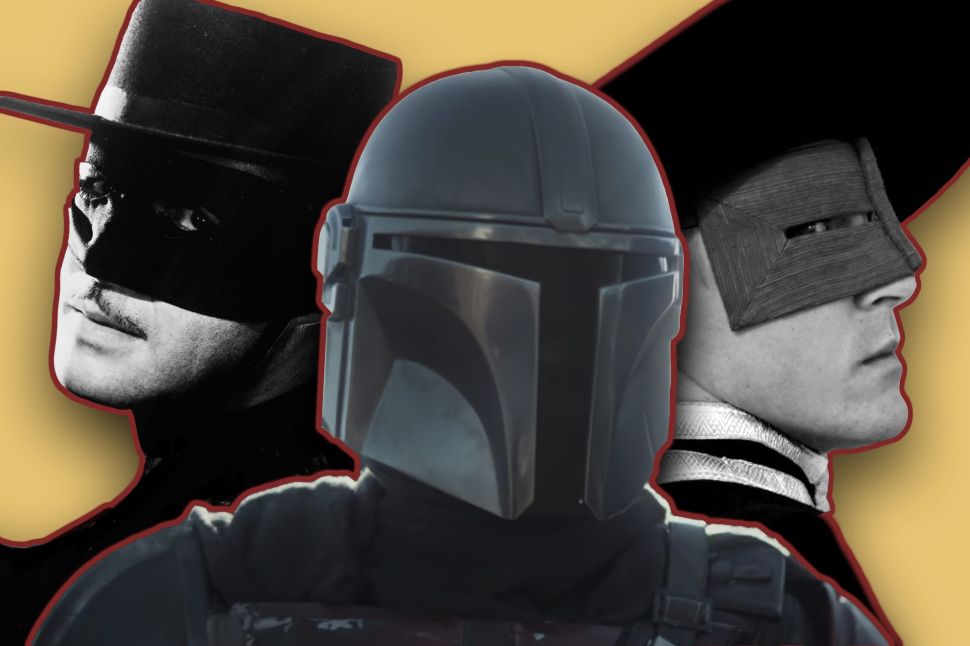 Filed Under: TV, Movies, Entertainment, The Mandalorian, Pedro Pascal, Disney Plus, Clint Eastwood, the lord of the rings, Zorro