When Lynda Birnie first saw a photo of the diminutive green creature, she wasn’t sure what she was looking at. Its eyes were large and its ears were larger. It was clothed in what could only be described as a miniature burlap sack, and in videos, it wobbled from one place to another with a childlike stumble.

Birnie may not have known what she was looking at, but she knew she was in love. “I thought he was the most adorable creature I had ever seen,” she said.

It was late 2019, and the tiny alien that the Internet would dub “Baby Yoda” had just debuted on Disney’s flagship Star Wars streaming series, The Mandalorian (returning to Disney+ on October 30th). Birnie quickly sought the show out, and when “Baby Yoda”—known as “the Child” in-universe—appeared at the end of the first episode, a switch flipped. “I was madly in love and became a Star Wars fan,” Birnie said. “Each and every episode was watched with the eagerness to see what this fantastic little creature was going to do next.”

When doll versions of the Child hit store shelves in the United States, Birnie had a friend mail one to Australia. Soon she was dressing it in a panda-spotted onesie, and had given it a name of her own: Wally Colorado.

Birnie isn’t alone. The nebulous, mysterious nature of the character’s origin has opened a door for fans to graft new identities onto the toy foundlings they have “adopted” as their own. Across social media, these “Mommalorians” live out their lives with Baby Yoda, and attach their own personalities onto the doll’s open face. For some, Baby Yoda dresses in bucket hats and dinosaur pajamas. For others, he loves chicken nuggets from McDonald’s. For still others, he’s a competitor in a Baby Yoda-themed version of The Bachelor, where every competitor is, you guessed it, Baby Yoda. For a group of California firefighters, he’s even become an unlikely mascot. For everyone, he is very, very cute.

Mommalorians are a group as wide-ranging as their dolls. Many, like Birnie, are totally indifferent to Star Wars, brought on board exclusively by their attraction to the Child. “I’d rather watch Spaceballs, if that tells you anything,” said Stormy Carbonel, who nonetheless has already acquired a shelf-sized collection of Baby Yoda merchandise. Carbonel felt the show succeeded on its own terms, without any connection to the larger universe. “You don’t have to be a Star Wars person to like The Mandalorian at all,” she said.

Other Mommalorians, however, are enormous fans. One, Tonyah Everhart, even held a Star Wars-themed wedding in a rented airplane hangar retrofitted into a rebel base.

“The first movie I ever went to was The Empire Strikes Back,” Everhart said. When The Mandalorian premiered, she and her husband made time to watch together, and Everhart quickly added a Baby Yoda doll to their room full of Star Wars props and merchandise. Soon, the doll had developed a personality of its own.

“I was invited to some of the Baby Yoda websites, and I was kind of looking around and people had already started doing it,” Everhart recalled. “They were just dressing him up and everything like that. And I’m like, ‘Well, how fun could that be?’ So I bought a couple and started doing little stories with them.” 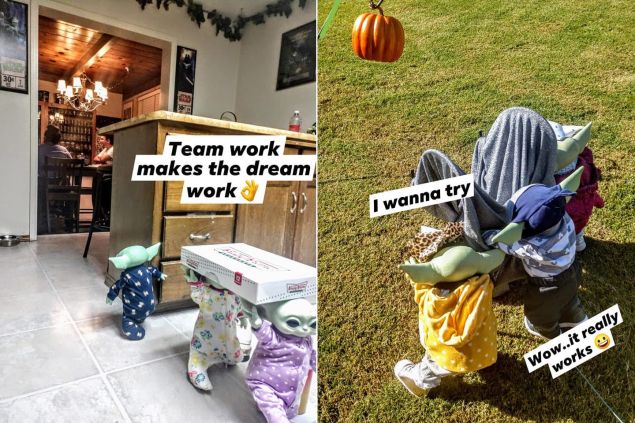 Today, Everhart’s stories are the talk of the largest Baby Yoda Facebook fan page (more than 117,000 members). She has four dolls: Hux, Jyn, Jaina and Ezra, all named after characters from the Star Wars films and Expanded Universe. In photo stories crafted by Everhart, the dolls get up to all sorts of carefully crafted shenanigans, from stealing a box of Krispy Kreme donuts to launching a pumpkin across their “mother”’s backyard via a makeshift slingshot. “I think about the things that my children had done, when they were younger,” she said. “And they’ve done some pretty crazy things.”

Where Everhart’s dolls have a distinctly childlike personality, other Mommalorians are raising slightly more mature aliens. This summer, two Baby Yoda Facebook pages got together and hosted a “Yodachelor” competition, an opportunity for one male Baby Yoda doll to find love among a flock of female Baby Yoda suitors.

Hope Boyce’s “Izzy” doll was the eventual victor. Like Birnie, she first came across Baby Yoda on Facebook. “Someone had posted a meme, and I just thought wow, isn’t that a cute little character?” she said. After seeing more and more memes flooding her feed, she subscribed to Disney+ and scrubbed through Mandalorian episodes to get every scrap of Baby Yoda content possible.

Boyce’s doll, which she describes as “spontaneous,” used the contest as an opportunity to show off her ballet and sewing skills, and closed out the cooking show with a fiasco. “Everything kind of fell apart and she ended up in jail, and had to get bailed out,” Boyce said. “Her parents had to help her and things kind of worked its way out and had a happy ending. But she got her entry in at the very last minute because she was incarcerated for a bit.”

This type of elaborate storytelling, complete with sound effects and Photoshopped graphics, is the most time-intensive type of Mommalorian behavior. Others take more of a relaxed approach, focusing on the meme and social element of the page. For Cara Jean Potter, the pages have provided a comforting oasis in the midst of often upsetting real-world news.

“I love that the site is non-political and COVID-free,” she said. Potter, who has a young son on a ventilator, has been surprised by the outpouring of support she received from the Mommalorian community, with thousands and comments and reactions expressing their support for the family. One fellow page member, a comic book illustrator, reached out to her and offered to provide a personalized comic book turning her “children” into superheroes. “The world, and everything that’s going on, there’s just so much. But there are good things,” she said.

For many Mommalorians, The Mandalorian and Baby Yoda himself have provided one of those good things. With Disney gearing up for a new season of the show, the character is about to be the center of attention online once again.

Most fans said their doll-raising exploits wouldn’t affect their interest in the show, and many said the plot of the show actually enhanced their care for the dolls. Unlike previous cute, peripheral Star Wars creatures, Baby Yoda remains a central part of The Mandalorian. The show is explicitly about caring for him, in a way that escaped Last Jedi’s porgs or Return of the Jedi’s Ewoks.

On the show, just as in the lives of the Mommalorians, Baby Yoda is a helpless, playful little creature in need of protection. “He looks like a baby!” said Carbonel. “He’s so innocent!”

“I feel like it’s that bond between Baby Yoda and the Mandalorian that kind of gives people this sense of ‘The Child’,” said Potter. “He’s someone that you can protect and take care of, and he’s adorable.”

For Lynda Birnie, her cross-continental doll is a little more than just a plaything. “Baby Yoda is not just a toy, he/she became adoptable merchandise. People didn’t buy just to own,” she said. “They bought to adopt.” 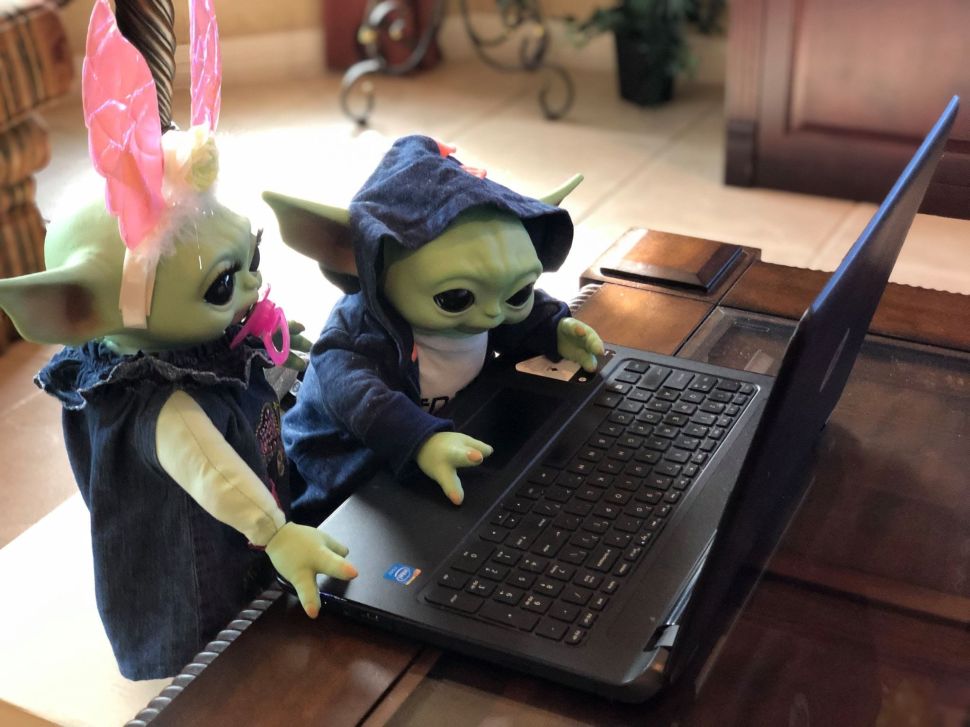