In March and April, as the COVID-19 pandemic devastated New York and forced us all to adapt to the rhythms and rituals of life in lockdown, I figured someday I’d watch a well-researched documentary about the disaster. I imagined myself watching it in a Manhattan screening room, surrounded by fellow critics, all of us relieved to have left that crisis behind. What I did not imagine is watching a film about the pandemic on my couch, still in quarantine, as the pandemic continued to rage on in the outside world.

The film is Totally Under Control, an urgent and infuriating new documentary chronicling the U.S. government’s bungled response to the virus that has now killed nearly a quarter-million Americans. It was filmed in secret by filmmakers Alex Gibney, Ophelia Harutyunyan, and Suzanne Hillinger during the frantic months immediately following the economic shutdown, and is now being rushed to release (albeit not indoor theaters) before the election.

Gibney is a veteran documentarian, known for sharp, incisive looks at scandal and corruption (Enron: The Smartest Guys in the Room, Client 9: The Rise and Fall of Eliot Spitzer), but he has never made a film quite like this before: The three filmmakers never worked in the same room at the same time, and some of their interview subjects were shot using a remotely operated contraption dubbed a “COVID-cam,” which was sent to interviewees from afar. The resulting film conveys the dizzying sensation of chronicling history while it’s still unfolding.

At its best, Totally Under Control functions as a thorough corrective to the outrageous lie—currently peddled by Mike Pence and other Trump minions—that the present administration did the best job possible in curbing the coronavirus and that 200,000 American deaths were sadly inevitable along the way. The film accomplishes this by offering a detailed play-by-play of how leadership lapses and bureaucratic failures sabotaged the CDC and FDA’s development of a mass testing program in February, allowing the virus to spread undetected for weeks, and by directly contrasting the nation’s failures with South Korea, where officials quickly mobilized to ensure a wide supply of tests and where the death count hasn’t topped 500.

Along the way, it’s chilling to hear from a series of health officials and private-sector authorities, who all tell variations on the same story: I tried to sound the alarm, but nobody listened. We meet Mike Bowen, owner of the biggest surgical face mask manufacturers in America, who recounts how he urged the federal government to ramp up domestic mask production both before and during the early days of COVID-19 but was ignored. Bowen’s worst fears came true when the nation was faced with a drastic mask shortage.

We also meet Dr. Eva Lee, a pandemic expert known for modeling infectious diseases, who studied the early reports out of Wuhan and sensed that the world was heading towards pandemic. In January, Dr. Lee was part of an email chain of doctors and medical officials expressing alarm about government inaction amid the growing outbreak. “In late January, we were cautiously monitoring, trying to assess, when it hit us how big the scope of the calamity [was] that we were looking into,” Dr. Lee tells viewers. When she studied the virus outbreak on the Diamond Princess cruise ship in February, her worst fears about the disease’s contagiousness were confirmed. These early scenes have the feel of the blissful opening moments in a horror movie, except you know what’s going to happen because you’re still living it.

Although Totally Under Control takes its title from a now-infamous Donald Trump quote (“we have it totally under control… It’s going to be just fine,” he insisted in late January), the film isn’t single-mindedly focused on the president. There are no clownish montages of Trump gaffes, no Michael Moore-style stunts played for laughs. The emphasis and insight from those within the medical community proves more enlightening than a mash-up of Trump’s lies.

The film’s major theme, though, is how scientists and medical experts were routinely censored and silenced by the Trump administration whenever they veered from the president’s Panglossian script. One crucial source is Dr. Rick Bright, a BARDA official and vaccine researcher, who describes how he was removed from his post after he pushed back against Trump’s nonscientific insistence on hydroxychloroquine as a COVID-19 treatment. “It’s not easy to come forward in this administration, OK?” Dr. Bright says in a highly emotional interview. “It was a very hard process to lay our careers on the line to push back.”

It can’t be easy, either, to make a documentary about a global pandemic visually or stylistically engaging, since so much suffering occurs in private homes and hospital beds, but Totally Under Control finds creative workarounds. Footage of unsuspecting American crowds in February is eerily embellished with X-ray boxes representing tiny droplets spreading from person to person. (You’ll never look at square-dancing the same way again.) The segment about that email chain is spiced up with action clips from Red Dawn, the 1984 film that inspired the name of the email group. Scenes examining the administration’s bumbling attempts to provide PPE are cheekily soundtracked with C.W. McCall’s novelty tune “Convoy.”

All throughout, the visual abnormalities of the interview clips (shots of interviewees lowering masks, fleeting glimpses of shower curtains and tarps that separate them from the cameraman) communicate the severity of the crisis just as much as the content of the interviews. Such flourishes reflect the challenge of filming a documentary about a pandemic during the pandemic.

This quality renders Totally Under Control timely and significant, since it’s among the first feature-length documentaries to tackle the pandemic. But it also detracts from the film’s final third, which feels a bit jumbled as the filmmakers rush to pack in a range of significant pandemic developments from the past four months. Events such as Trump’s June Tulsa rally and the recent revelations from Bob Woodward are addressed only in passing; naturally, there’s not as much detail or insight to glean here as when the film chronicles the early months of the crisis. (Nor is there much interrogation of the individual human toll of the pandemic—the millions sick, the unemployed, the people forced to say goodbye to loved ones over FaceTime—but that would be a different film entirely.)

In a truly surreal coda, Totally Under Control concludes with a title card stating that Donald Trump tested positive for COVID-19 one day after the film was completed. (Alex Gibney has said the head of Neon, the film’s distributor, woke him at 2am with the news.) That the filmmaker couldn’t have known whether the president would still be alive when his film premiered is a testament to how suddenly, and how drastically, the world can change in 2020—and how crucial it is to document the blaring alarms we ignored along the way. 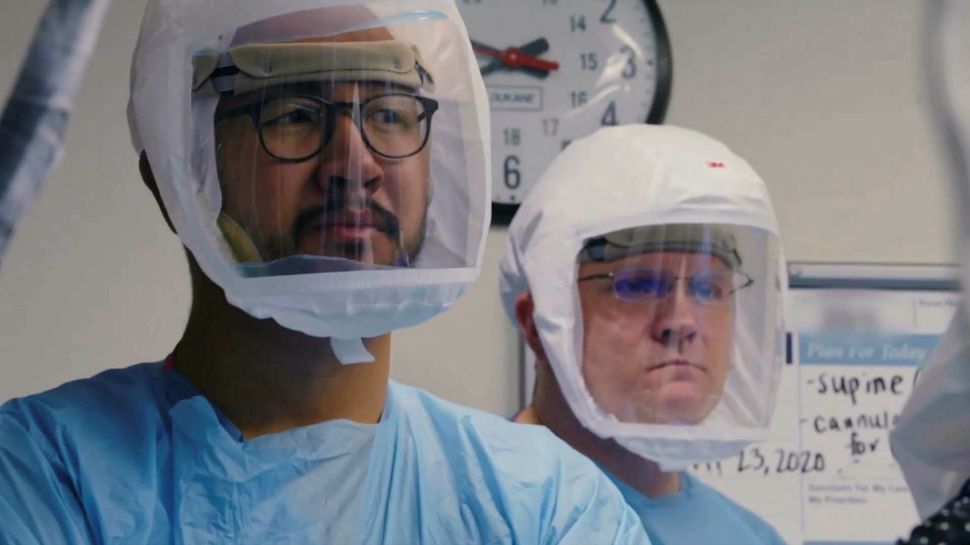