With COVID-19 cases hitting the third peak (or the next part of the first wave, if you ask Dr. Fauci) in the U.S. and surging around the world, testing is becoming increasingly important to trace the virus’ spread so as to keep it under control. While the U.S. already has conducted more coronavirus tests than any other country, and you can get them for free at most local health centers and some pharmacies, one significant problem remains: it takes too long to get results back.

“It’s such a waste of money and it’s helping to drive lots of infection because you don’t hear your result until well after you’ve infected other people,” Bill Gates, a vocal critic of the Trump administration’s response to the pandemic, said in an interview during Yahoo Finance’s All Markets Summit on Monday. “They should run the headline every day: ‘U.S. testing system worst in the world, delayed results being paid for.'”

Turns out it’s now the profit-strapped private sector that’s offering a ray of hope to change that. On Thursday, in a desperate move to keep its air business afloat while ensuring safe travel, United Airlines announced that it will start a four-week trial to offer free rapid-result coronavirus tests to passengers on select routes. United will provide passengers with Abbott’s ID Now test kits, which can produce results within 20 minutes.

Also on Thursday, Kroger launched a rapid antibody testing (which tells whether you have had the virus in the past) program that promises to return results in 15 minutes. The FDA-authorized tests are conducted by using a finger-prick blood sample. It’s currently available in California and Michigan but will be available at all Kroger pharmacies by the end of November, the retailer said. Anyone who believes they have infected by the virus but are not yet showing symptoms is eligible to get tested for $25.

CVS is also rolling out unspecified rapid COVID-19 tests nationwide, aiming to cover 1,000 locations by the end of the year. The pharmacy chain currently has about 4,000 drive-thru testing locations in the U.S.

Some states are finally embracing antibody tests—faster in producing results but not as accurate as traditional lab PCR (polymerase chain reaction) tests—as coronavirus cases skyrocket. Wisconsin is rolling out nearly two million such test kits to local health centers and pharmacies. Maine is pushing for a similar program. The antibody test used in Wisconsin has an accuracy rate of 97.2 percent, slightly lower than lab PCR’s 98.5 percent. “These are very, very, very good numbers, particularly for a test that you get back within 15 minutes,” said Brett Giroir, President Trump’s national coordinator for COVID-19 testing, on Thursday. 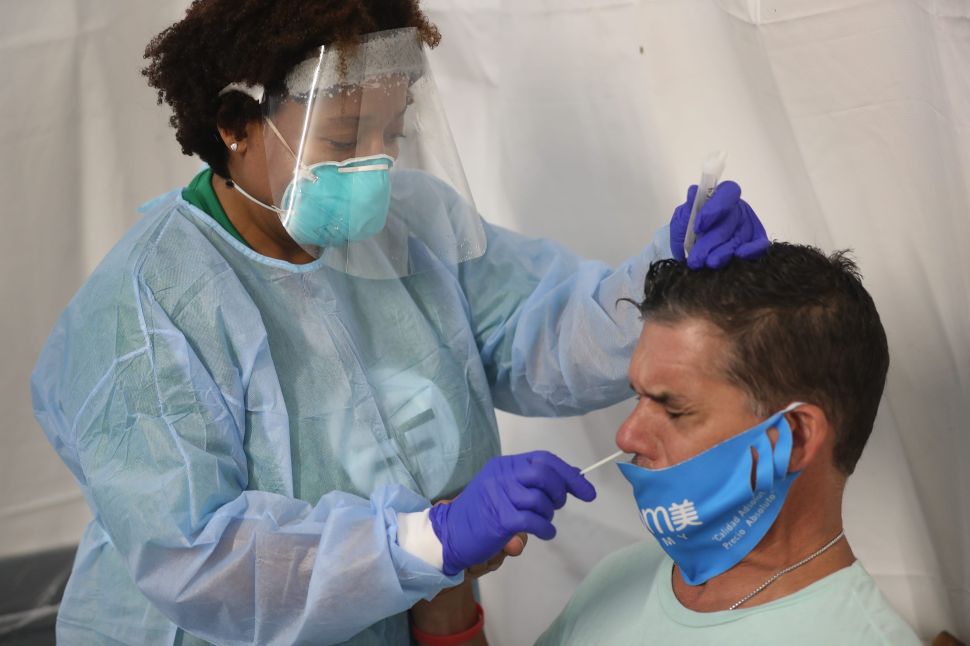