Prehistoric violence, chess battles, a social commentary on hair and a cringe-y scene between Borat’s 15-year-old daughter and Donald Trump’s lawyer and former New York mayor Rudy Giuliani are your watch list this week. Observer Entertainment has curated the guide below to help figure out what to watch this weekend on your off-hours. The major streaming services alike are represented below, from Netflix to Hulu to Amazon, and we’ve offered recommendations for for all of them, including both new releases as well as hidden gems that may be buried between the cracks.

Lead actress Anya Taylor-Joy learned from the “chess gods” to prepare for The Queen’s Gambit, she told Observer. And why not? Her role in Netflix’s newest miniseries, an excellent coming-of-age look at a young woman addicted to both the game and to alcohol, demanded it. The show comes out today. Watch The Queen’s Gambit on Netflix.

Bad Hair, Hulu’s newest original film, comes from director Justin Simien, creator of Dear White People, and is a comedy-horror about hair, specifically Black women’s hair and society’s expectations around it. It stars Elle Lorraine, Jay Pharoah, Lena Waithe, Kelly Rowland, Laverne Cox, Chanté Adams and many others in an ensemble cast. While the film’s reception since its Sundance debut has been mixed, as critic Teo Bugbee observed at the New York Times, “Horror provides a useful framework for Simien’s critical voice,” and his “social critique gathers vitality from the gore.” Watch Bad Hair on Hulu.

The ruthlessness of Primal cannot be overstated. This is an Adult Swim show created by the Genndy Tartakovsky, the man behind Dexter’s Laboratory, Samurai Jack, Star Wars: Clone Wars and the Hotel Transylvania franchise, and it’s about a prehistoric caveman and dinosaur who form a bond through the bloodshed they face on a daily basis. Dialogue-free, the show lives on its visual storytelling and addictive action. It’s mesmerizing to watch, and the first half of its first season is available in full on HBO Max, with new episodes currently dropping on Adult Swim every week. Watch Primal on HBO Max and its new episodes on Adult Swim.

If you’d like a breather from the flood of Halloween content, consider Once Upon a Snowman, a newly released 12-minute short film spun-off from the Frozen franchise and directed by Dan Abraham and Trent Corey. The short reveals the origins of Frozen‘s lovable comic-relief snowman Olaf (Josh Gad). Watch Once Upon a Snowman on Disney+.

Peacock has a bit of a reputation for having a better library than it does originals, and one of its new acquisitions, Mr. Mercedes, upholds that reputation. Fortunately it’s still a crackling watch. Irish actor Brendan Gleeson (dad of Domhnall) and The Crown and Star Trek: Picard‘s Harry Treadaway star in a crime drama that pits a retired detective against a serial killer. If you’re a fan of Luther or True Detective or Dirty Harry movies, this is one to watch. Watch Mr. Mercedes for free on Peacock.

Borat Subsequent Moviefilm, aka Borat 2 has no business being as good as it is in 2020, nearly 15 years after the first Borat was released. Fortunately, as I explained in my (spoiler-free) review, the movie more than argues for its existence, adding the crucial supporting cast member Maria Bakalova as Borat’s “15-year-old daughter” and pitting her against America’s worst. The Rudy Giuliani scene is already infamous. Watch this movie. Watch Borat Subsequent Moviefilm on Amazon Prime Video.

And if you want a blast from the past…

The Goosebumps TV series is streaming on Netflix in its entirety. This week Observer spoke with the architect of the franchise, R.L. Stine himself, who with his wife Jane had eyes on every episode before it aired: “We had to see every script. You had to make sure, since it was Goosebumps, that it didn’t go too far, that it didn’t get too silly, that it wasn’t too grown up,” he told reporter Yasmine Shemesh. Watch Goosebumps on Netflix. 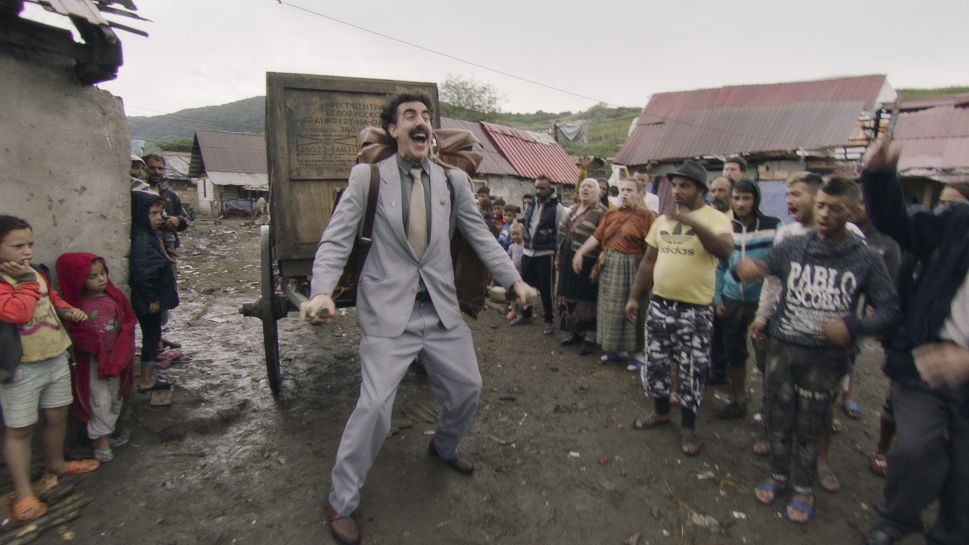