An outspoken American hero, Woody Guthrie composed “This Land Is Your Land” among countless other folk songs and collaborations. He’s commonly remembered as a rambling, rugged individualist, who famously wrote “this machine kills fascists” on his guitar. It’s easy for larger than life figures to become icons, their symbolic importance outshining the facts of their living years. Yet, through new research on Woody Guthrie in Haverford College professor of American literature Gustavus Stadler’s important biography Woody Guthrie: An Intimate Life, one finds greater depth and complexity in a man you may have otherwise considered a myth not unlike Johnny Appleseed.

Thanks to the revival of deeply progressive politics, Woody Guthrie is squarely back in the spotlight. As relevant as ever, merging art and politics, Guthrie even offered posthumous commentary on Trump’s father—his former Brooklyn landlord—beyond the grave when his song called “Old Man Trump” surfaced in recent years. This fresh engagement with the artist opens up the possibility of new perspectives on the folksinger. Woody Guthrie: An Intimate Life examines a more corporeal and personal side of the man behind the legend. Looking beyond the “male wanderer unfettered by social conventions associated with home, work, family” Stadler focuses on Guthrie’s “life-long preoccupation with the fragility of bodies, with their propensity for coming unorganized and undone, with their need for assistance, care and repair.”

The book opens in 1942 with a vulnerable moment shared by Guthrie and modern dancer (and Guthrie’s future second wife) Marjorie Mazia. In a rehearsal of a performance that merged choreography with performances of traditional American folk songs and excerpts from poets such as Carl Sandburg, Guthrie found himself out of tempo. With great tenderness, Mazia intervened to create cues and shortcuts to aid Guthrie. This instance of genuine collaboration sparked a lifelong connection, but also what Stadler calls “an inaugural act of intimacy, an unsolicited but much-needed offer of care in a moment of helplessness.”

Using this entry point, Stadler pivots away from the archetypical images we associate with Guthrie to concentrate on a man devoted to pure expression and feeling. In the wake of postwar panic over communism, Guthrie was someone who believed not only in socialism as a political system, but also as a personal calling for social responsibility and devotion. Stadler writes, “He was someone interested in thinking about how it feels to be in the world—with what makes us feel good (being close to others, sharing secrets with them, having sex with them) and what makes us feel bad (injustice and inequality, but also shame, insult, isolation from loved ones). This Guthrie was an artist in multiple modes—music, verse and prose, fiction, painting—who didn’t set the personal against the political.”

Rather than operate as a traditional linear, authoritative biography, Stadler’s biography hones in on collisions where Guthrie’s work intersects with others through feelings ranging from shame and defensiveness, lust and longing, tenderness and grief. Stadler compresses the years of Guthrie’s life before meeting his second wife Marjorie Mazia so that he can fully examine the impact that their collaboration sparked. Their bond survived the marriages they abandoned for one another and even outlived their own marriage. In his lifetime, Guthrie recorded and published an extensive musical catalog as well as an autobiographical novel, yet so much more of his work was never made public. As evidence, the Billy Bragg/Wilco album Mermaid Avenue, made up of lyrics written by Guthrie and put to music by Bragg and Wilco, demonstrates that these recovered lyrics are hardly lesser works—the simply weren’t in sync with the times in which they were written.

Or were they also of a more personal, searching vein? In addition to unfinished books and songs, Guthrie was a prolific correspondent. The letters that Guthrie wrote Mazia—and other women, which led to an obscenity arrest—were explicitly sexual, curious and searching. At times, they launch into fantasy, but they are forever grounded in the truth Guthrie found through an earnest grounding in bodies.

Guthrie sought to make his private life a place of repair rather than a space for escape or consumption. Stadler asserts that Guthrie asked “is it possible to think in more complicated ways about how the worlds we make for ourselves, in our relationships with others, might serve a greater political purpose?” Recovering from trauma showed Guthrie a new way to understand politics. Justice was an ongoing struggle that one addressed through actions. Guthrie struggled to understand what fueled his father’s hatred and the demons that plagued his family as well as the specter of fire that took his sister’s life then his daughter Cathy Ann and also almost took his father’s life as well.

Stadler brings the rigor and close reading of an academic deeply engaged with queer studies as well as 19th and 20th century American literature. Yet it wasn’t simply music or the myth that drew Stadler to his subject. Speaking with Observer over the telephone, Stadler traced his curiosity in Guthrie through his own interest in Bob Dylan (for whom Guthrie was a mentor) as well as his late father’s love of Guthrie. Reading Joe Klein’s 1980 biography of Guthrie, Stadler was surprised by the manner in which Guthrie’s obscenity charges and obsession with sex was pathologized as a symptom of Huntington’s disease. He realized that some of Guthrie’s papers from his hospitalization at Greystone Park Hospital were housed at nearby Swarthmore College. From there, he did more extensive research in the official archives which were then located in Mount Cisco, New York.

Entering this research without many expectations, Stadler said, “I got really attached to the archives immediately and decided the first day, ‘O.K., I’m going to write an article about this.’ And then then by the end of the second day I spent there I thought, ‘I’m writing a book.’”

Surprised by what he found, Stadler notes, “There’s so much material, so much beautiful artwork. There are huge journals where he paints over his own writing There are love letters, and there’s a lot of sex letters too and so much about children. Immediately you get this sense of a really different person from what, I think, is the most common conception of him, or what has made him iconic.” Guthrie emerges as “this much more vulnerable person.”

Before reading this book, I would have thought that music was merely a conduit of political expression for Guthrie. Now, I’d say that Guthrie was committed to a loftier notion of socialism as union. Stadler writes, “For Guthrie, intimacy was the place where people made one another powerful.” Beyond that point, in conversation, Stadler adds, “The more I got immersed in [Guthrie’s material], the more I saw there was something really radical about just the way he was willing to let things happen. Like the idea that maybe this female dancer is really interesting politically or simply not being orthodox in that way because relationships with people always rattle orthodoxies.” It was this drive to follow connections which “lead for him in a way that I don’t think a singular political platform did.”

Throughout the book, Stadler finds moments where Guthrie complicates American culture (folk songs, novels, autobiography, political expression) by “plumbing the relationship between state power and the most intimate depths of psychological being.” With his exploration of shame as a source of knowledge and resistance, Guthrie was ahead of his time. Later, as his afflicted body began to betray him and again when he was marked as a deviant, Guthrie began to see the experience of marginalization as a deeper understanding of humanity and provided another way to organize. Stadler writes “He began to sense that ‘normal’ was less of a common-sense ideal than a way of maintaining the power structure.” Taking time with writing that others have dismissed as the product of illness, Stadler opens not only our understanding of Guthrie, but also the work of shifting social perceptions of intimacy, emotional honesty, and the treatment of and language surrounding illness and disability.

For Stadler, too, writing the book offered a departure in form and intention. He reflects, “Something about the archives relaxed my scholarly mind, or made it porous. I really wanted to render a person or make a portrait of what hadn’t been painted before. At the same time, I had become interested in affect theory, which was very much in vogue, and I was just trying to think about how do you write in a way that communicates an affect rather than describes it? And thinking about whether there’s a place for that?” Stadler recognizes the paradox of constructing a theory around feeling when you’re attempting to work away from conventional thinking. He concentrates instead on the “challenge to write a book where, even if it was academic, it had an argument that gradually takes shape out of feeling for the reader as an intervention.” This biography offers not only a fresh portrait of Guthrie, but also participates in a more spacious and critical project—how self-expression evolves within the course of a lifetime in play with others to track a shift in society. Woody Guthrie: An Intimate Life reimagines an American legend and creates space for emotional exploration and radical companionship. 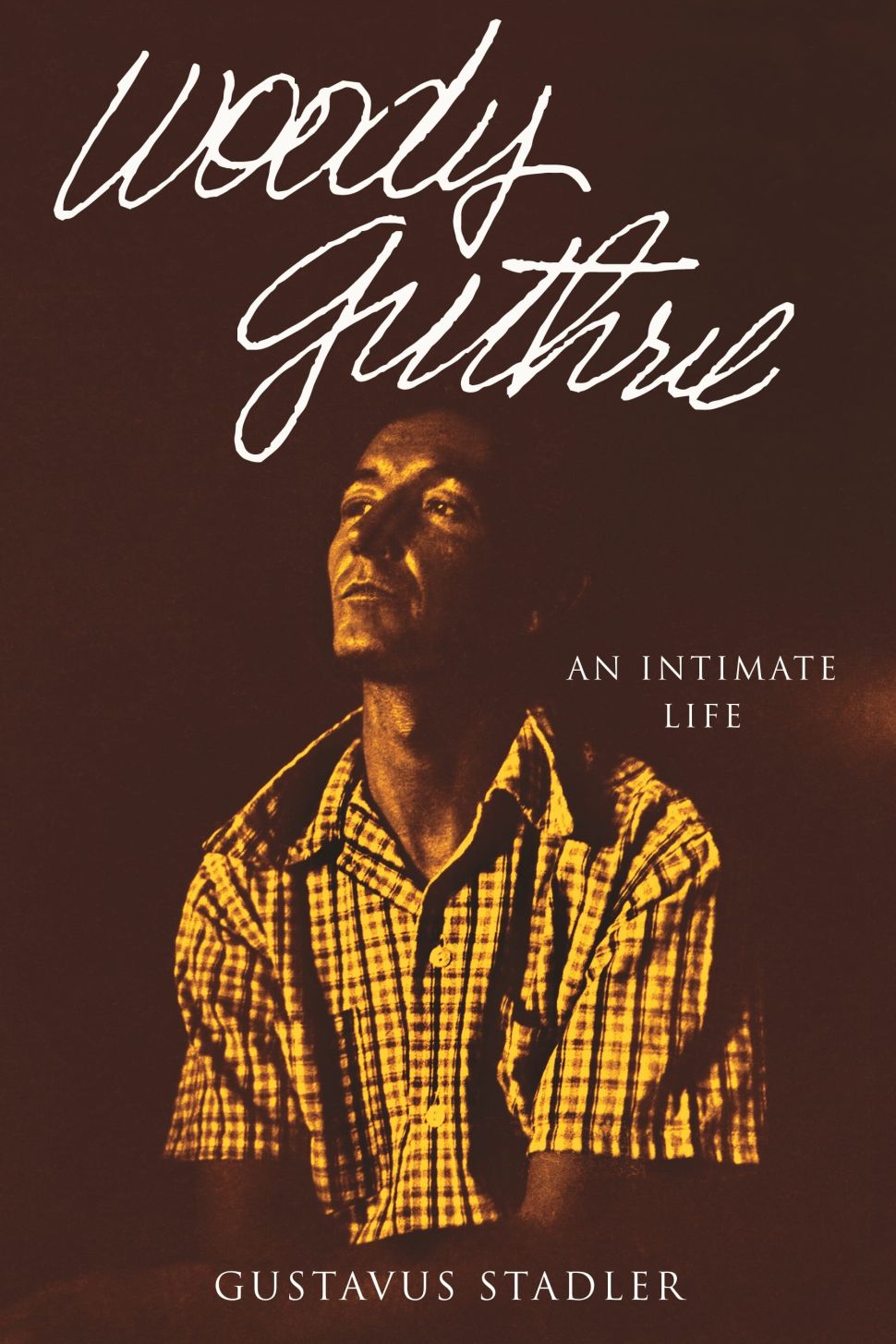