Supersonic air travel is speeding toward a comeback.

The Colorado startup Boom Supersonic is in the midst of a new jet called Overture, which it says will be the world’s fastest airliner. Following in the footsteps of the Concorde, the Overture will whisk travelers across the globe faster than the speed of sound. The jet is expected to hit the skies for passenger air travel as soon as 2025, with flights on Boom’s XB-1 test model beginning in early 2021.

Boom’s lofty ambitions will face considerable headwinds. The last supersonic jet, the Concorde, remains fixed in the public consciousness even 17 years after it was retired. The Concorde, built by Aérospatiale (now Airbus) and the British Aircraft Corporation (now BAE Systems), took off in 1969 and was the fastest airliner on the market, traveling at more than twice the speed of sound. To this day there are no passenger aircraft that even come close to the speeds the Concorde could achieve.

“The Concorde was a technological masterpiece… It did something truly remarkable. It could carry passengers at twice the speed of sound,” says Bob van der Linden, Curator of Air Transportation and Special Purpose Aircraft at the Smithsonian Institution.

For all of its technological innovation, the Concorde ultimately was grounded due to regulations and resultant its economic viability.

In 1973, the Federal Aviation Administration banned civil supersonic air travel over land due to the sonic boom that the aircraft created as it broke the sound barrier. That significantly limited where the plane could fly; transcontinental flights were out of the question, and due to its limited fuel capacity, flying across the Pacific was off the table, as well. The only feasible flights given the circumstances wound up being across the North Atlantic to and from North America (New York and Washington, DC) to Europe (London and Paris).

Ultimately, the limited routes weren’t enough to create long-term sustainability for either the manufacturer or the airlines—British Airways and Air France were the only carriers to fly the aircraft. “A lot of airlines lined up for options on the aircraft, then when they actually saw the operating costs, nobody [else] bought it,” Van der Linden explains.

Public perception wasn’t helpful, either. In July 2000, a Concorde operated by Air France crashed outside of Paris, killing all 109 people on board. As a result, the aircraft went from being statistically one of the safest aircraft on the market to the most deadly, in part because it ran so few routes.

“Even though the problem was fixed, even though Air France and British Airways made substantial investments to strengthen their planes and make sure that accident would never happen again, they never saw enough a return of customers to continue to operate the plane,” explains Henry Harteveldt, the president and travel industry analyst at Atmosphere Research Group. After the terrorist attacks of September 11th, 2001, consumer confidence in air travel dipped across the board. The Concorde never recovered and was grounded in 2003.

The technology the company uses, including thermally stable carbon composite airframes instead of aluminum, which makes the plane lighter, is in place. The company says it will be able to cut travel time in half—Seattle to Tokyo in four and a half hours, New York to London just three and a half. And all seats will be business class.

Demand is another question.

“Today, the conditions for mainstream supersonic flight are here. International passenger travel has grown more than 7-fold since 1970. Despite the short-term effects of COVID-19, these trends are expected to continue,” Blake Scholl, founder and CEO of Boom Supersonic, tells the Observer. “Technological advancements allow Overture to fly sustainably on more than 500 transoceanic routes—at fares comparable to today’s business class.”

Harteveldt thinks that by the time Overture is ready to take off, public health and the economy will be in much better shape than they are right now. “Business travel, which would be the primary audience for a supersonic plane, will have returned,” he says. “The economic landscape will be much better than it is right now.”

There’s plenty of time, but things certainly don’t look good at the moment—right now, business travel has plummeted and airlines are strapped for cash. In October, with government assistance having expired, American Airlines and United laid off a combined 32,000 workers.

Boom partnered with Japan Airlines (JAL), which pre-ordered 20 aircraft but now faces financial jeopardy. The Tokyo-based airline posted a $810 million operating loss in the third quarter, while its executives took a 10% salary reduction in April on the heels of the COVID-19 pandemic. JAL still fared significantly better than other airlines across the globe, but sustainability is still a question.

It’s not just travel in the abstract; flashy jets are also on the decline. While the Concorde’s grounding happened 17 years ago, Boeing’s 737 MAX controversy has consumers hyper-vigilant once again.

After two crashes that killed 346 passengers, investigations revealed that Boeing and regulators cut corners on the approval process for the massive jet. In May of 2019, a Barclays survey revealed that more than half of flyers wouldn’t be willing to travel on a 737 Max

It’s all a bit of a mess. Ireland-based budget carrier RyanAir reportedly intends to purchase up to 200 737 Max jets, while Alaska Airlines is closing in on a deal to purchase an undisclosed number of them. Whether they’ll be delivered is an open question — in October, Boening announced that it had received three cancellations on 737 MAX orders and only delivered 11 orders to customers, which was less than years prior. The 737 MAX is also bringing down other jets in the Boeing fleet, as the company has totaled almost 450 canceled orders so far this year.

“Ultimately, the traveling public will be the final judge and jury…people are going to want to be assured that aircraft will be safe,” Harteveldt continues.

Boom still has some time; the company rolled out its demonstrator plane for test flights, but those won’t take off until early 2021. It will break ground on the factory to build Overture in 2022, and put the first aircraft in production in 2023. “We’ll host our next supersonic rollout in 2025,”  Scholl tells the Observer.

The timeline also allows Boom to work around another barrier that currently airlines and aircraft manufacturers are rushing to figure out how to address right now — how to retrofit jets for the post-COVID-19 world. “Designing the first post-COVID aircraft gives us the opportunity to envision a cabin that maximizes privacy and airflow and minimizes surface contact,” Scholl adds. 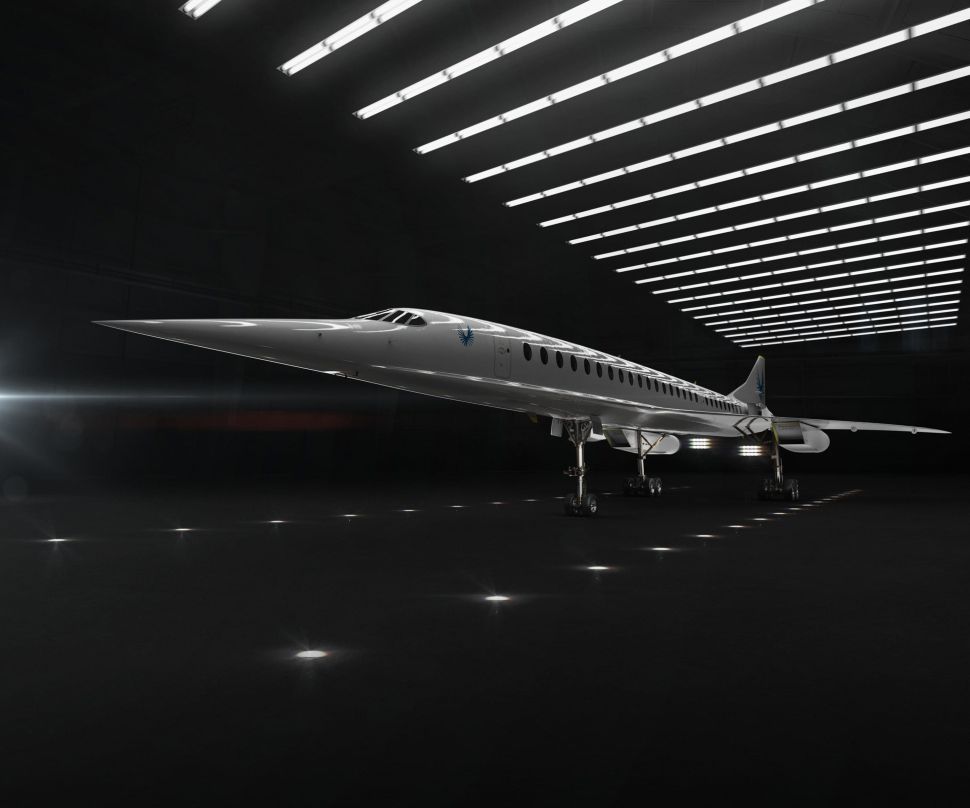