American quilts are quaint comforters. With their mismatched scraps of cotton fabric and predictable patterns, seeing these blankets often makes us think of white-haired ladies rocking thimbles in rocking chairs. Except that’s not quite true. A look between the hand-stitched seams of historic American quilts reveals that they have a long tradition of being used as a form of political protest.

A new exhibition at the Toledo Museum of Art, “Radical Tradition: American Quilts and Social Change,” gathers over 30 quilts from the mid-19th century to the present that have rallied for social causes. “Quilts have always engaged the pressing social and political issues of their moment,” writes curator Lauren Applebaum in the exhibition’s catalog. “Throughout history they have been deployed, often by marginalized people, to confront instances of violence, oppression, and exclusion.”

One of the oldest quilts in the show is Nine Patch (1864), a patchwork of nine-squared grids made by women across the country and stitched together in Detroit by Charlotte Fitzgerald Hussey and her daughter, Susan. When the American Civil War broke out, relief organizations collected and distributed supplies like these quilts from Ladies’ Aid societies in the north. The quilts were meant to warm Union Army soldiers on the front lines, and thousands of women created an estimated 250,000 quilts during the war.

Meanwhile in Alabama, a collective of African American women in Gee’s Bend made expressive geometric quilts, sometimes using material from old work clothes and feed sacks in inventive combinations that have inspired generations of quilters and artists. The collective is still active, making quilts that are celebrated worldwide.

“A lot of the more historical 19th century quilts in the exhibition are created by networks of quiltmakers,” Applebaum told Observer. “That’s something that has stretched through history.”

Quilting lends itself to a group effort, since fabric strips and a set pattern can be handed off to individuals and assembled easily, later. One of the 20th century quilts in the show was made by prisoners liberated from the Dachau concentration camp at the end of World War II, out of woolen fabric from suits taken by the Nazis. Another collaborative quilt made a few decades later is the Vietnam Era Signature Quilt, also in the exhibition, which was sold to raise funds to rebuild a Vietnamese hospital bombed by the U.S. Air Force. Celebrities like Cesar Chavez, Shirley Chisholm, Pete Seeger and Gloria Steinem endorsed the effort by signing the quilt’s fabric squares (which upped the blanket’s appeal for memorabilia-loving fans).

And the largest community art project in the world, the NAMES Project AIDS Memorial Quilt, began in 1985 and now includes over 48,000 panels commemorating more than 100,000 people who died of AIDS-related complications. Each panel (one of which is in the exhibition) is dedicated to at least one specific individual, humanizing victims of the virus at a time when it was deeply stigmatized.

The AIDS Memorial Quilt inspired a contemporary patchwork stitched together as an Instagram grid, the Tiny Pricks Project. For the past two years, textile artist Diana Weymar has been embroidering Donald Trump’s tweets and statements onto vintage fabrics in order to create a material record of his presidency. She then posts the pieces to Instagram. “Textile is something we all share, use, value, and need,” Weymar shared with Observer, of the reason why fabric allows viewers to process Trump’s incendiary statements in a different way.

What Weymar began as a solo project quickly became a group effort, with people worldwide creating and mailing in submissions by the hundreds as the Covid pandemic kept them at home (and closer to needle and thread). “The pandemic has drawn us inward emotionally and physically,” said Weymar. “This practice goes well with the interior world.”

Just as Weymar originally intended the Tiny Pricks Project to be a solo endeavor, more and more contemporary artists are exploring quilting and collapsing the fine art hierarchies that have deemed quilting a mere craft.

“Contemporary artists who are incorporating quilts into their work are getting very experimental,” noted Applebaum. “They’re overlapping different kinds of media and sort of blurring the boundaries between quiltmaking and painting, or quiltmaking and woodworking.”

In an artwork by Sanford Biggers participating in the show, Quilt 8 (The Cartographer’s Conundrum), the artist spray painted a five-pointed star onto an antique quilt to reference how constellations were used to help freedom seekers navigate the Underground Railroad, and how quilts were used as signposts along the same trail. Hank Willis Thomas made a quilt out of decommissioned prison uniforms to raise questions about mass incarceration, in “The only thing one can do after seeing a canvas like this is total revolution,” also in the show.

And so we’re going to have to change that image of quilting we have in our heads, the one where matronly figures with prim buns bend over fabric scraps. The medium has been revolutionized. Or rather, in fact, it was always revolutionary. 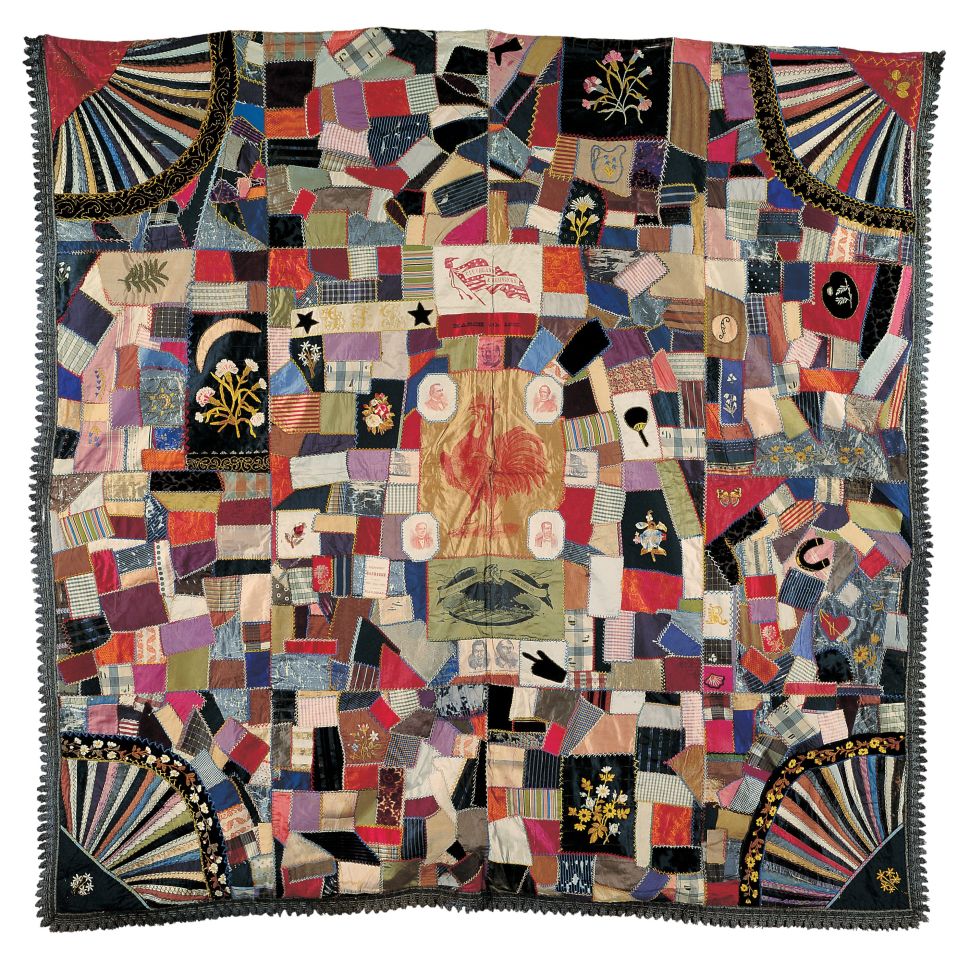