A big hit at virtual 2020 film festivals, the British film Ammonite is an uncommonly literate and meticulously constructed dossier on the life of 19th-century paleontologist Mary Anning, as well as a sensitive dossier on the daunting and dangerous consequences of being a lesbian in the 1840s. The second feature by writer-director Francis Lee, who sports a keen fascination for queer period melodramas observed with a sharp eye focused on unlikely characters finding love in ugly, odious places. (His debut feature was the critically acclaimed God’s Own Country, about a gay sheep farmer and a migrant worker.)

There is no historical evidence that real-life Mary Anning ever had a love affair with anyone, much less a woman, but Mr. Lee exercises his right to literary license with a shameless aplomb that is never less than engrossing, thanks largely to Kate Winslet’s exquisite, carefully studied performance as a cold, disillusioned woman cheated from her rightful place as a scientist by men who admired and emulated her, then stole her valuable contributions as their own discoveries. Isolated from the academic community in the brutal coastal village of Lyme Regis, she spent her days climbing rocks and searching the beach for antiquated fossils preserved in ammonite shells, many dating back to Jurassic times—studying, identifying and often selling her finds to tourists in her tiny shop to support her tubercular mother. One day a rich admirer named Roderick Murchison (James McArdle) arrives from London to buy one of her small rocks, accompanied by his sick, fragile wife Charlotte (the splendid Saoirse Ronan), who is suffering from a debilitating illness following the death of their only baby.

Bored, indifferent and no longer sexually interested in any kind of marital intimacy that might produce another child, Roderick pays Mary to nurse his invalid wife back to health in the fresh sea air and goes away, leaving Charlotte behind. With proper food, exercise and long walks on the beach, Charlotte begins to improve, sharing her bed with Mary for warmth and discovering the true meaning of friendship. Lonely and unloved, both women are drawn to each other and eventually their early strained relations turn physical as stoicism gives way to passion.

It’s a calm and precisely measured style of filmmaking devoid of almost any hint of explicit eroticism (one hour and ten minutes before the first kiss). I’m baffled by the reviews I’ve read by critics who confess shock and awe over a couple of love scenes they consider daring. To me, the sex in Ammonite is nothing short of a yawn. The movie is also ponderously slow—the cinematic equivalent of liquid valium. But the two accomplished actresses at the helm balance two sides of a difficult equation exquisitely, exact and admirably immersed in total dedication to their roles, and supported by a fine peripheral cast including Gemma Jones as Mary’s dying mother and Fiona Shaw as a neighbor whose own failed interest in Mary suggests Charlotte might not be her first lover.

Nothing seems arch or unnatural, but there were times when I truly felt the whole thing craved a bit of pace, not to mention a deeper and more profound ending. After an undisclosed passage of time, Mary visits the still fully besotted Charlotte in London and becomes enraged to discover the big surprise she’s been promised is a wing of her lover’s lavish home replete with adjoining bedrooms to deflect suspicion, and a study where she can live and work in luxury and peace, far away from her unrewarding life in the punishing poverty and mud by the sea. Rejected, baffled and heartbroken, Charlotte doesn’t understand why Mary has changed. I may have missed something, but neither do I.

SEE ALSO: Francis Lee Made ‘Ammonite’ to Pay Tribute to Women Who Were Unsung in Life

Ammonite  has moments of delicacy and beauty, but it’s not a movie for everybody. It leaves you longing for a resolution it never provides. The two women are last seen staring at each other in a London street through the opposite windows of a rain-soaked carriage. Despite Kate Winslet’s masterful appeal, the bewildered Charlotte does not understand why Mary chooses her hard-shelled fossils in ammonite over unconditional love, or why she has finally become the human equivalent of one herself.

Ammonite is in select theaters today, November 13 and arrives on video on demand December 4. 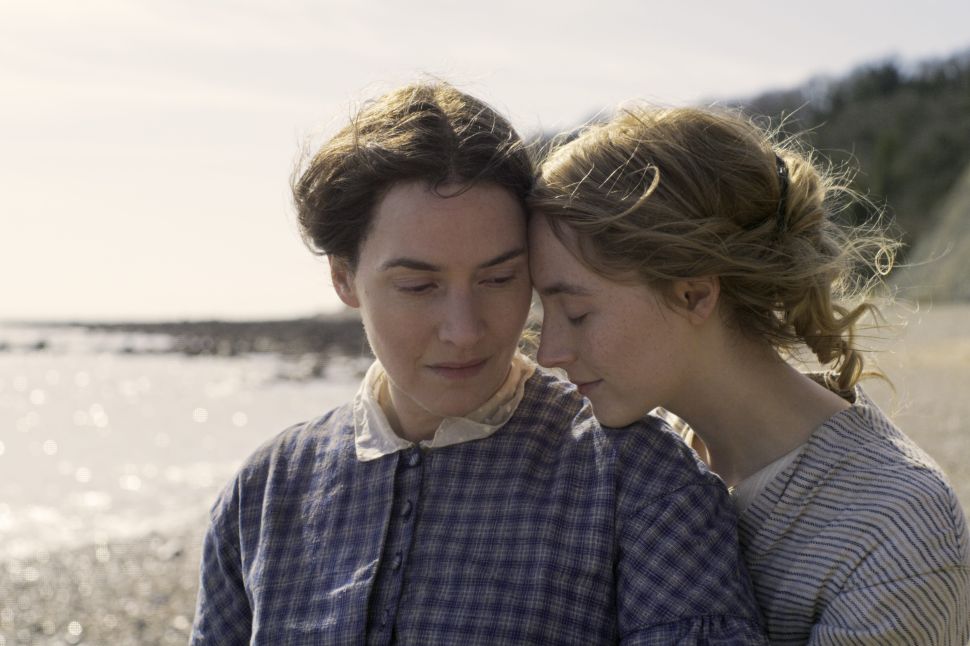