The problem with public displays of artistic expression is that the medium may be too interactive.

A bicycle missing its back wheel was a complimentary piece included in Banksy’s recent work alongside a graffiti image of a girl hula-hooping with said wheel. Yet over the weekend, the broken bicycle, which was chained to a nearby pole outside a beauty salon, went missing, leaving the artwork incomplete for the first time since it popped up on the side of a property at Rothesay Avenue and Ilkeston Road in Nottingham on October 13. Resident Tracy Jayne first noticed the missing piece Sunday morning, according to the BBC.

“The artwork records an important part of Nottingham’s history, Raleigh bikes,” she told the outlet. “My late husband worked for Raleigh until it closed in 2002. He died at age 48 in 2017. It’s such a shame if someone has stolen the bike. It’s sheer disrespect and saddens me very much.”

By Monday morning, a replacement Raleigh Outland mountain bike without its rear wheel had been swapped in as a replacement, per The Guardian.

Banksy’s work is known to appear without much warning before being claimed by the artist’s mysterious Instagram account. On October 17, the account posted this image of the original work. To date, the post has received nearly 2 million likes.

Despite protection from a transparent cover, the BBC reports that Banksy’s latest work has been targeted with spray paint on at least two occasions. Now, half of the artwork has been removed (though we doubt a broken bicycle will fetch much at the local pawn shops). Neither Nottinghamshire Police nor Nottingham City Council cited any counts of reported theft. 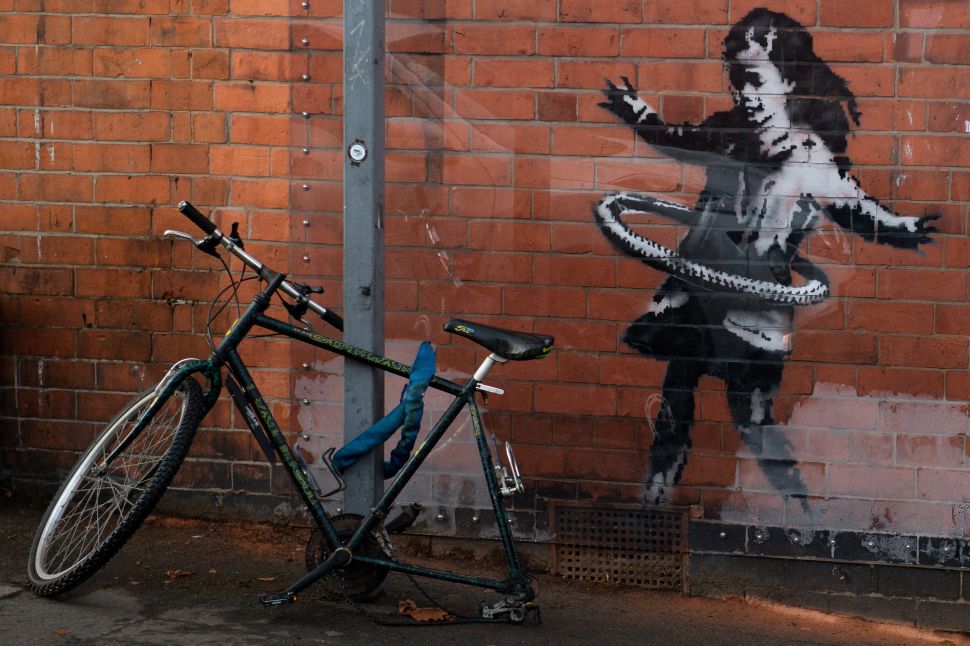