Twenty years ago, I reviewed Bill Irwin in Samuel Beckett’s Texts for Nothing at Classic Stage Company and sourly concluded: “Clowns can’t do Beckett.” I was young and thought I could make grand assertions about the author of Waiting for Godot. Yes, silent-film clowns had a defining impact on Beckett’s style, and his plays (or texts adapted for the stage) contain much comic business and grotesque humor. But should trained clowns (or dancers, in the case of Mikhail Baryshnikov, for example) act him?

What irked me then about Irwin’s Beckett was its athleticism and fastidious verbal precision. The human corpus in Beckett’s work is always in decline: it stinks, it hurts, or just refuses to move. Or else we are meat puppets, jerked around by unseen forces, sudden impulses. Similarly, his language can pour forth in cascades of erudite nonsense, or loop back over and over—thoughts having thoughts about thoughts.

You might assume all of this is red meat for the clown. But I could not get over Irwin’s robustness, his kinetic vitality, his readiness to show us how he can collapse his spine or step into a muddy puddle with choreographic exactitude. Every flap of arms, every twitch of the mouth or vocal inflection was calibrated and deployed with robotic precision. To me, Irwin was the clown as jock. I wanted Beckett bodies and voices to be devoid of craft, emptied of virtuosity—except the will to trudge and babble. The theater, after all, is the most mysterious art because it’s where a person can do absolutely nothing on stage and be dramatic.

All this retrospection is simply to whimper: Forgive me, Bill Irwin. I maintain my reservations about whether clowns are ideal interpreters of Beckett. But it turns out that you have doubts, too. “Is Samuel Beckett’s writing natural clown territory?” the performer asks early on in his delightful On Beckett / In Screen. “That is a question we will pursue and examine.” My pig-headed certainty is demolished by your gentle humility. As it was repeatedly in the course of this warm, engaging, strangely comforting online event, streaming free through November 22.

Two years ago, Irwin performed his memoir-ish revue On Beckett at the Irish Repertory Theatre (which I missed) and now he and co-director M. Florian Staab have returned to Irish Rep’s stage to record the show for quarantined audiences. Surrounded by few set pieces and zany couture (not one but two pairs of baggy pants), Irwin draws on decades of performance genius and lore to earnestly ask, How are we supposed to do these difficult plays, much less enjoy them?

Irwin has no easy answers, admitting that he’s no scholar, doesn’t speak French, and comes at everything from a performer’s standpoint. The 75-minute lineup is brief but perfectly satisfying. Irwin recites a couple of haunting sections from Texts for Nothing; he reads the eerie “that’s the show” passage from The Unnamable; he turns a singsong rhyming section from Watt into a bravura vaudeville bit; and he walks us through Waiting for Godot, including Lucky’s logorrheic spew-speech. Along the way, Irwin demonstrates the stereotype of the “stage Irish” and explains speaking with his American accent, not trying to tart up Beckett’s bleak prose.

In between virtuosic but understated performances, our charming host TED Talks basic information about Beckett. Those well-versed in the modernist icon may want to fast forward these sections: how his major texts were written in French and then translated them into English; the variant pronunciations of “Godot”; and how Beckett fought in the Resistance during World War II, probably coloring his view of humanity’s innate goodness.

In the end, I started thinking that Irwin—time having chiseled his choirboy good looks and softened his baby blues—has come to resemble the gauntly handsome author. Those memento mori cheekbones, that thousand-yard stare; don’t they suggest a closer acquaintance with frailty, finality, and futility? You could say that we’re all Beckett tramps now, waiting in hermetic limbos with little sense of time or reason. Has Irwin grown into Beckett, or have I? 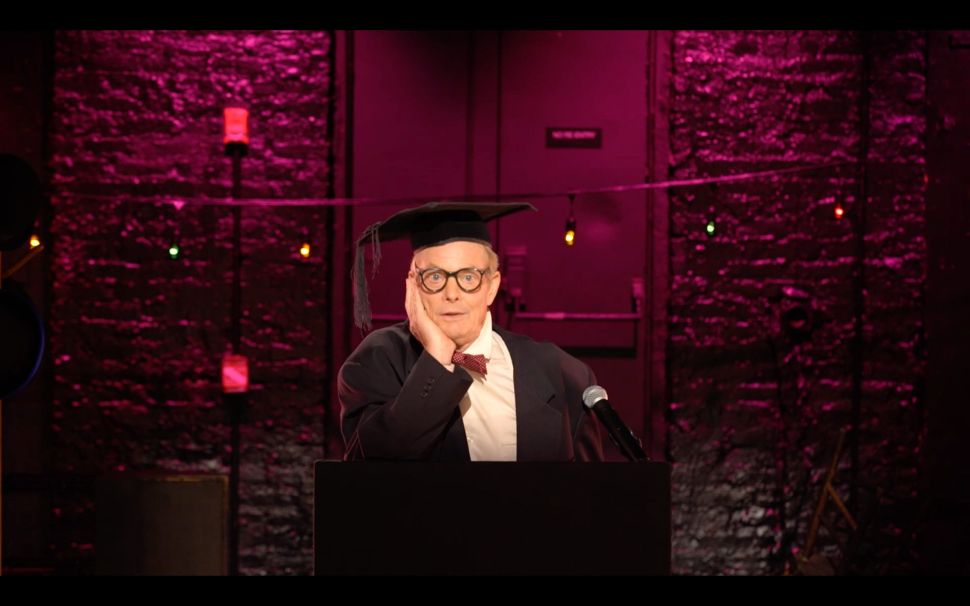