The holidays are upon us, which either means joyous family reunions or dreaded family reunions. Either way, you’re going to need some festive entertainment to throw on in the background as the turkey burns in the oven and your uncle drinks all the eggnog. So to help navigate the holiday season, here are 10 Christmas movies you can stream right this very moment. You’re welcome.

It’s a Wonderful Life is a stone cold classic and arguably the perfect archetype for what a good Christmas movie should be. (Don’t worry, we have plenty of schlocky Christmas movies on this list too). George Bailey’s journey is one for the ages and the film doesn’t shy away from the tougher aspects of life like most contemporary holiday films. Plus, there was a great Friends episode where Phoebe discovers It’s a Wonderful Life. What more can you ask for? Watch it on Amazon.

The Nightmare Before Christmas

The beauty of Tim Burton’s The Nightmare Before Christmas is that it enables you to bridge Halloween and the end of the year festivities all in one. Leave it to Burton to perfectly pack both sweetness and spookiness into one delightful feature. Fortunately, it’s the rare film that can be enjoyed by all ages—so kids, parents and grandparents are all welcome. Watch it on Disney+.

Kurt Russell is such a good Santa Claus that it makes you wonder why the job ever went to Tim Allen in the first place. According to Netflix data, 20 million households watched this movie over its first week of release in 2018. Not too shabby. Clearly, the streamer was impressed because it just released a sequel this week. There’s your holiday double feature right there. Watch it on Netflix.

Yes, the animation is a little wonky and makes you feel as if you’ve fallen into the uncanny valley. But that doesn’t completely undercut what it an otherwise heartwarming tale of a young boy who boards a magical train headed to the North Pole. Also, Tom Hanks is in it and he’s the physical Hollywood embodiment of the Christmas spirit. Watch it on fuboTV.

All you young whippersnappers out there need to get over you fear of old movies. (The same goes for anyone not willing to read subtitles). Miracle on 34th Street is an easy introduction into a previous era of wonderful cinema. Little Susan Walker is unsure whether or not Santa Claus exists, so kindly gentleman Kris Kringle helps her to find the truth. It’ll make you feel like a kid again. Watch it on Disney+.

It doesn’t matter if Die Hard is a summer blockbuster, the entire plot revolves around Christmas. We’re claiming it as a holiday film and we don’t care what anyone thinks. Die Hard is easily a top-three action movie ever made and is the perfect entertainment to pair with your holiday ham. Watch it on Crackle.

Who would win in a fight: Thanos or Kevin McCallister with 24 hours to prepare his Jigsaw-esque booby trapped house? The world may never know. But we do know that Joe Pesci and Daniel Stern don’t stand a chance against this evil genius prodigy. Watch it on Disney+.

How the Grinch Stole Christmas

Jim Carey going full Jim Carey for the holidays. Ya gotta love it. While Hollywood studios are insistent on reviving IP that audiences have shown they don’t care about (sorry, Peter Pan), The Grinch keeps rolling as a hit for Universal. Watch it on Netflix.

Screenwriter Richard Curtis is a titan of the romcom genre with an Oscar nomination under his belt, which makes Love Actually something of a, ahem, special entry among his filmography. But we know this film has its ardent supporters, so have at it you crazy kids. Watch it on Amazon.

Netflix’s recent raunchy romcom Holidate is a decidedly not-safe-for-work type of original, so we doubt you want to fire this bad boy up with your entire extended family. But if you all are very close and don’t mind some naughty toilet humor, you can bang out a year’s worth of holidays with this one. Watch it on Netflix. 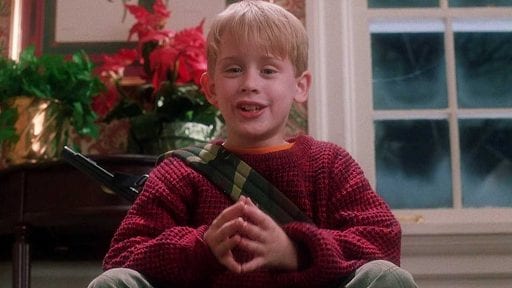