A head spinning, adrenaline-rushing roller coaster ride. Highs, lows and deep dives so brutal you’re not sure there is a safe return. Election Day and post-election day drama and trauma are the culmination of months of underlying but ever present anxiety, dread and tension. It is now Thursday, and as of this writing, we still have no final answer as to who the next president of the United States will be.

With the seemingly ceaseless drama surrounding the U.S. Presidential election, it’s difficult not to be reminded of the politically charged Battlestar Galactica, which is available to stream on Peacock. Amid an ocean of stars, the beloved series managed to navigate the ideological concept of governance, democracy and the nature of power with striking insight. This was most prevalent in the show’s frequent transfers of power and the many forms that can inhabit; democratically peaceful, forcefully militaristic and everything in between. What was most compelling about these events was how the context could dictate belief and action within the characters, often pushing well-intentioned people to do the wrong thing for the right reasons and vice-versa. Often, this would result in fluid political perspectives that would shift over the course of the series.

The show, which revolves around a race of humans from a distant planet and their artificially intelligent robotic creations, the Cylons, begins with a nuclear attack that kills 50 billion people. This includes the President of the Twelve Colonies and every person in line to become president except Laura Roslin (Mary McDonnell), the Secretary of Education. (In retrospect, this is a much better origin story for Kiefer Sutherland’s Designated Survivor.) From the first episode, Battlestar Galactica establishes a democratic line of succession beholden to the existing government at the time of humanity’s near demise. The show also immediately portrays Laura as a kind-hearted and intelligent leader who prioritizes civilian liberties and maintaining democracy as she establishes a quorum of elected officials to represent the varying factions of remaining people. She is, in other words, BSG‘s reigning liberal vessel.

This stands in stark contrast to Commander Adama (Edward James Olmos) of the battlestar ship Galactica, who is first presented to us as a hard-lined military leader now essentially responsible for the survival of the last remnants of the human race. He bemoans that he’s now “taking orders from a school teacher,” and is generally painted as the conservative counterpoint to both Laura and his own son, Lee (Jamie Bamber), a progressive-leaning fighter pilot at the start of the show.

Though Adama and Laura begin developing a begrudging respect for one another over the first season, her advocacy for legal governance often runs counter to his militaristic strategies. This culminates in the two-part Season 1 finale “Kobol’s Last Gleaming” in which Adama, divided from Laura over the direction of the fleet, stages a military coup to impose martial law. Up until an assassination attempt on his life from a sleeper agent Cylon, he effectively wrests control over the 40,000 remaining humans by force. That he believed he was doing what was necessary to ensure the survival of his species only muddies the ethical waters.

Naturally, as only long-form television can devise, these clashes are resolved rather easily in Season 2. But from this point on, we begin to see an exchange of political ideologies between the two. Laura, once the bleeding-heart liberal, is hardened by her experiences with a captured Cylon prisoner in Season 1’s “Flesh and Bone,” and her conflict with the Commander. There’s a steel that enters her heart from this point on. Adama, meanwhile, begins to soften, sensing that civilized democracy may be more necessary now than ever. He becomes far more open minded to the needs and desires of the fleet. This will come to define future power struggles within the show.

In Season 2, the battlestar Pegasus is introduced as is Admiral Cain, who has seniority over Adama. Cain is a ruthless leader with little regard for civilian life or opposing opinions, prompting Laura to suggest that Adama must assassinate her for the good of the people. Here is one of the many examples in which the context of an extreme situation elicits otherwise unlikely responses. Laura, though toughened by recent experiences, would never suggest such a violent maneuver under normal circumstances. Yet the potential extinction of the human race is anything but normal. It’s as if Battlestar Galactica is saying we are only as good as the given situation allows us to be.

Later in the season, with democratic elections that she arranged fast approaching, Laura attempts to rig the ballots and steal the race in order to keep the sniveling Gaius Baltar (James Callis) out of power. At the last moment, she has a change of heart and her morality winds up costing her the election in the two-part Season 2 finale, which has disastrous results throughout Season 3. With Gaius now President, the Cylons occupy humanity’s temporary home, using him as a figurehead to violently command the remaining peoples.

The fourth and final season sees a flurry of activity regarding centralized power. An officer under Adama collaborates with the Vice President to attempt a coup, violently dividing the fleet’s loyalties. Lee, who always felt the pull of civic duty and has left the military at this point for a political role in the quorum, helps to reestablish order and reinstall Adama and Laura to their rightful positions. However, Laura returns as President in name only, with Lee being positioned as her true successor and the chosen leader of humanity (even without a seen election to make it democratically official).

Ironically, the end of BSG‘s run coincided with the 2008 election, another hard-fought political battle fraught with tension surrounding the future of our country. Though the series was ostensibly a space-set soap opera about killer robots chasing humans across the cosmos, Battlestar Galactica‘s true focus was always on how we, as a people, choose to exist as a society. The show mapped out the intersection between liberal progressivism and conservative power dynamics, finding middle ground and even an exchange of viewpoints. Often, it turned out, our political affiliations were dependent on the context of a given situation, highlighted by the varied grabs for and transfers of power that Battlestar Galactica oversaw. 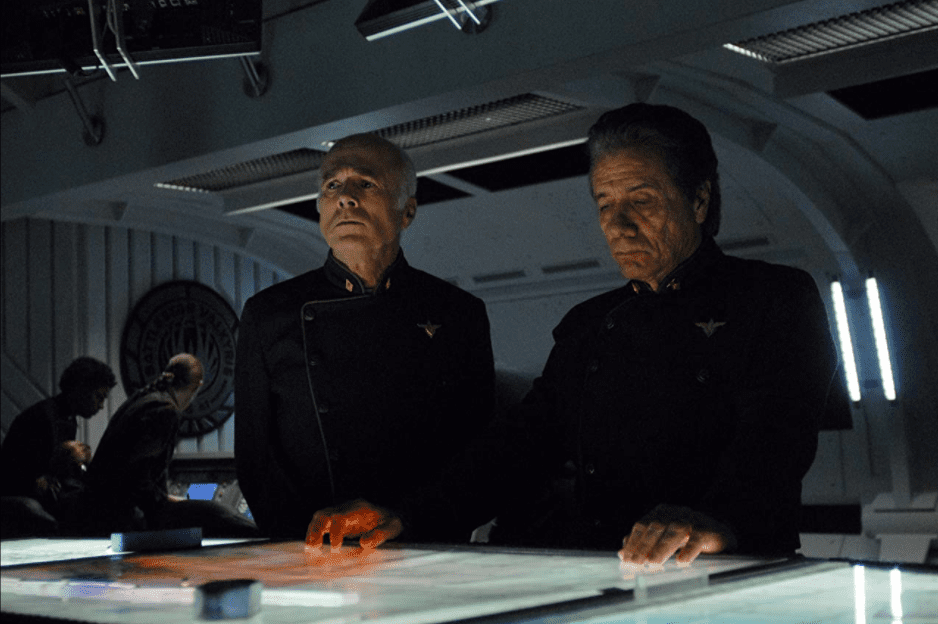