As a light-hearted Christmas rom-com, Happiest Season had both a lot resting on its shoulders and no bar to clear at all. Starring Kristen Stewart as Abby and Mackenzie Davis as her girlfriend Harper, Happiest Season has managed to skip the hurdle of being classed as an LGBTQ+ film to win people’s hearts over with its charm and hilarity.

The movie opens with Abby and Harper approaching the one year mark on a relationship, which appears to be perfect, full of cute smiles and loving embraces. They live together and Abby is thinking about proposing. However, they still have to figure out what to do during the holidays. Harper is set to return to her small-town conservative family while Abby is on pet-sitting duty for their friends in Pittsburgh since her family died when she was 19, and she hasn’t really celebrated the holidays ever since.

During a whimsical night out, though, Harper decides to invite Abby to come home with her and meet her family, forgetting for a moment that they can’t keep up their perfect life in a home where Harper isn’t out as gay yet. The revelation comes to Abby while they are halfway on their drive, and she agrees to play the part of the orphaned heterosexual roommate, on a promise that Harper will come out to her family as soon as the holidays are over.

What she couldn’t have foreseen though is just how invested Harper’s family is in keeping up appearances. The dad, Ted (Victor Garber) is running for mayor on a family values campaign, captured by the mom, Tipper (Mary Steenburgen) with her iPad pictures for her Instagram page. In this environment, Harper and her two sisters Sloane (Alison Brie) and Jane (Mary Holland, who co-wrote the screenplay basing Jane off a “heightened” version of herself) have to hear their parents’ love through accolades and triumphs.

Carefully apolitical, it’s the performances that make Happiest Season feel like such a gift. Whether it’s Alison Brie’s cut-throat supermom Sloane who is herself trying to keep it up for the sake of the family while she is going through a separation, or Dan Levy as John, Abby’s brisk advice-doling gay BFF (to another gay person, not the heterosexual protagonist for once), each character is grounded and funny in its own way.

In this ensemble cast, almost everyone sticks out, like the geek of the family, Jane, or Sloane’s demon twins Mangus and Matilda (Anis N’Dobe and Asiyih N’Dobe). But Aubrey Plaza’s performance as Riley, Harper’s ex-girlfriend who befriends Abby, is particularly sharp as a parallel is drawn between her and Harper’s other ex, Jake McDorman as Connor, whom she also reconnects with.

Happiest Season knew it had to be more than just a feel-good Christmas flick. As the first major-studio Christmas rom-com with queer leads, it had to exceed expectations, and accomplishes that by portraying a gay couple feeling comfortable, casual and self-assured in their own skin. People have been screaming for positive renderings of queer relationships, something which was made the most evident by the response to Black Mirror’s “San Junipero” episode, which also starred Davis. For once, a film about the gay experience doesn’t focus on the pain and trauma so much as the romance and the joy of being in love.

Politics is also left at the door. Harper’s family’s bigotry doesn’t come from personal ideology but rather form a desire to conform, which is a less threatening reality than what most queer folk have to live through—as Levy’s character reminds us—but it’s a welcome agent in letting us focus on the emotional stakes this sets on Harper and Abby’s relationship.

As a film trying to please everyone as a truthful portrayal of queer love for the LGBTQ+ community without being too threatening for the traditional rom-com audience, Happiest Season hits the mark. Hopefully it can grown into a Christmas classic in its own right. 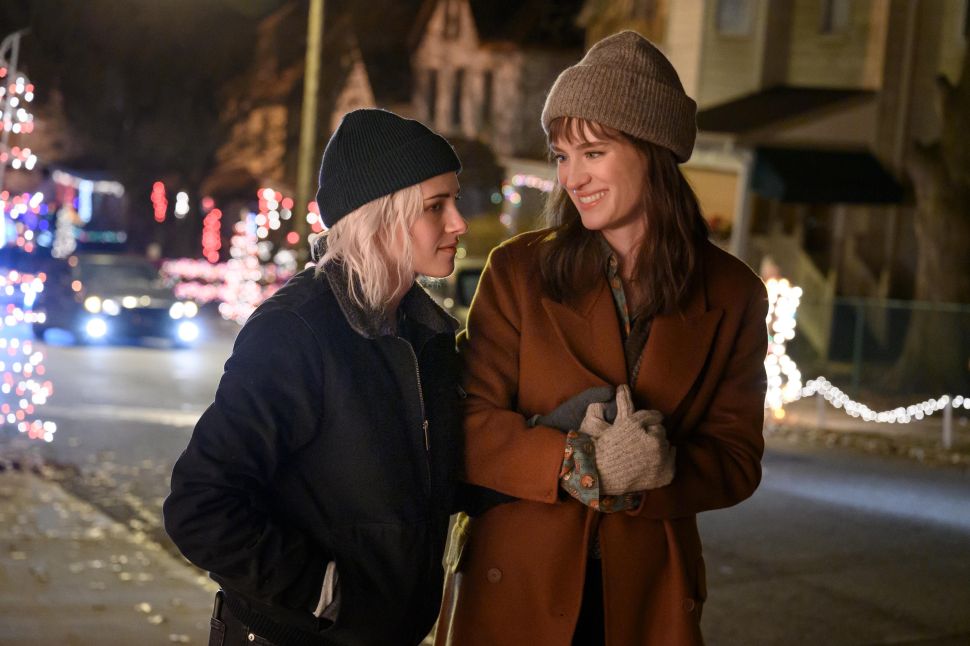