Back in May, Kate Middleton teamed up with the National Portrait Gallery to launch the Hold Still photography project. She asked people from all around the U.K. to submit a photo portrait depicting their lives amid the coronavirus pandemic, in order to capture the “portrait of the nation” during the difficult time.

Kate and a panel of judges received over 31,000 submissions, and selected 100 images that were displayed via a digital exhibition at the National Portrait Gallery starting on September 14. The digital exhibit, which has received more than 5.2 million page views since it debuted, is coming to an end, and to mark the occasion, the Duchess of Cambridge released a special video message thanking everyone who participated in the project.

“I just wanted to say a huge thank you to everyone who submitted an image to Hold Still,” she says in the video, which is posted on Prince William and Kate’s official KensingtonRoyal social media accounts. The Duchess of Cambridge, who is an avid photographer herself, said, “I launched the project with the National Portrait Gallery back in May because I wanted to find a way to allow everyone to share their stories and experiences of lockdown.”

Kate opted for a royal recycle fashion moment for the video; she donned a red Zara blazer that she first wore during the London Olympics back in 2012, per Instagram account @KateMidleton1, as well as an ethically and locally-made gold charm necklace by British jewelry designer Alex Monroe.

The Duchess of Cambridge said she was “thrilled by the response to the project,” and noted it wasn’t easy to select just 100 photographs for the final exhibit, but “we hope we have created a collective portrait of our nation, reflecting on what others have experienced as well as our own journeys through this difficult time.”

The 100 selected photos were also displayed on billboards and sites in 80 locations around the U.K.;  in October, Prince William and Kate visited one of the exhibit sites at Waterloo Station in central London to mark the launch of the project, and met frontline workers involved.

The Duchess of Cambridge ended the video by noting, “For me, the most powerful part of the project is that it has shown just how much people and communities have come together and how important we all are to each other. Thank you so much for being part of Hold Still and for sharing your stories with the nation.”

Kate’s latest message comes at a difficult time for many in the U.K., as England is currently in the midst of its second lockdown due to the COVID-19 crisis.

Kate also personally chatted with a few of the finalists; last week, the Duchess spoke via video call with Johannah Churchill, whose portrait “Melanie, March 2020” of her colleague, Melanie, setting up a COVID clinic in London was displayed as a mural in Manchester. Kate spoke with Johannah as well as Dr. Edward Cole, who was also involved in organizing the clinic, about how the photo played an important role in helping to “represent the experiences of frontline workers across the nation as they continue to tackle the COVID-19 outbreak.” 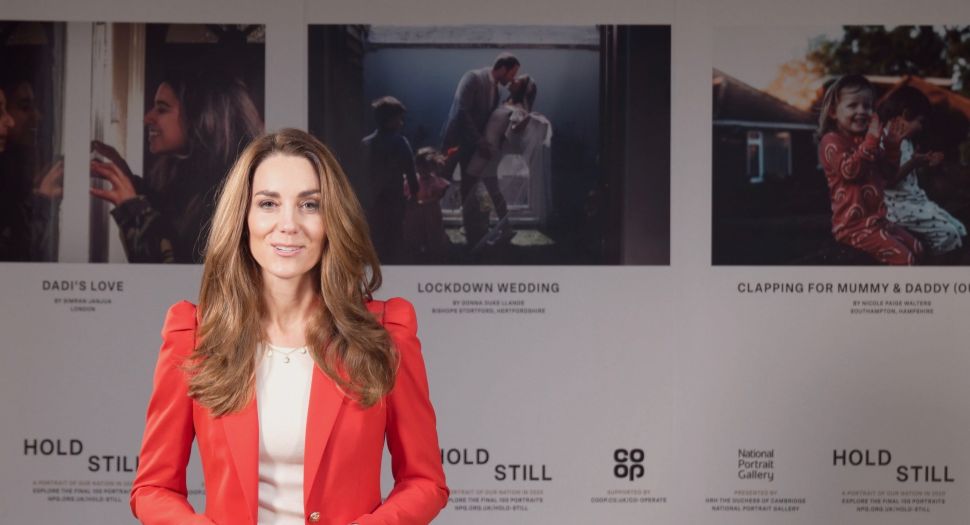