Even though Remembrance Day services and engagements have been scaled down in the U.K. due to the coronavirus pandemic, the royal family is still paying tribute to the British armed forces and military families. Prince William, Kate Middleton, Queen Elizabeth, Prince Charles, Camilla Parker-Bowles and other senior royals reunited in London for the annual Remembrance Day Service at the Cenotaph, honoring those who lost their lives in military service.

The royals are continuing to honor the armed forces, though many of the events are now virtual. The Duchess of Cambridge spoke with military families who have lost loved ones over a video call this week, and thanked them for all they’ve done.

Kate also gave a rare peek into her Kensington Palace home while doing so, providing a glimpse into the Cambridge family’s regal London residence, and the plethora of adorable photos she keeps out on display.

Kate wore a red poppy pin fastened to her white-and-black silk top on the call; the poppy traditionally honors those who have died in military service. It happened to coordinate rather perfectly with the red-and-white throw pillows on the couch, so perhaps the Duchess of Cambridge added those accent pillows specially for the occasion.

Behind her, a number of sweet family photos are displayed on a table, including quite a few that seem to have been taken by the Duchess of Cambridge, who is an avid photographer, herself. There’s a sweet snap Kate took of Prince George laughing in the grass at the family’s Anmer Hall country home, which was released to the public in honor of the future king’s sixth birthday, as well as a photo of Prince George and Princess Charlotte, both in their school uniforms, prior to the Princess’ first day at Thomas’s Battersea.

There’s also a solo shot of Prince William leaning on a car window, which was taken during his solo trip to Africa two years go, as well as a picture of Kate with Prince Louis, at the garden the Duchess designed for the Chelsea Flower Show last year.

Kate ended the call by thanking the military families for all they’ve done. “It’s been a real honor to speak to all of you, and I think I speak for the whole nation when I say just how proud you should be of your loved ones, and for the sacrifice and the bravery that they’ve shown,” she said. “I’ll certainly be thinking of you this difficult week and will be for many years to come.”

It’s not just virtual engagements this week, though, as earlier today, Prince Charles and the Duchess of Cornwall (both wearing masks) went to a service at Westminster Abbey to mark the centenary of the burial of the Unknown Warrior. 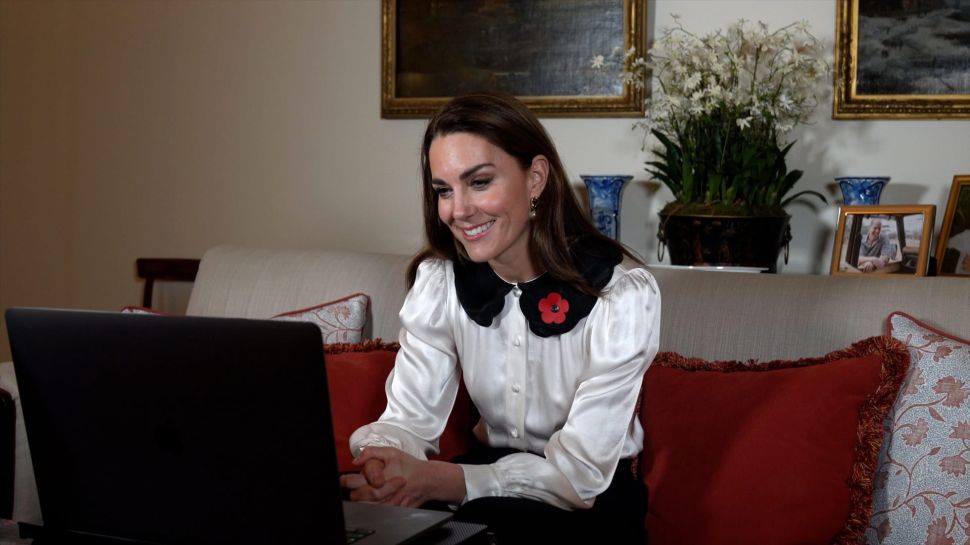