In a 2019 PCMag survey, 38 percent of respondents listed movie availability as the most important streaming factor when mulling which SVOD services to subscribe to. Last November, KPMG completed a study on U.S. consumer preferences when selecting streamers that found movies were a significant area of focus, particularly for new releases and original films. Yet despite that emphasis, direct to streaming video on demand films rarely feel as if they favorably compare to major theatrical releases in terms of reach and reward. They certainly don’t appear to approximate the “$1 billion box office in terms of cultural impact” that Netflix co-CEO Ted Sarandos claimed in the company’s Q3 earnings call.

Where does the real value lie and how do we measure it?

In 2018, Netflix original movie head Scott Stuber teased a “cinematic onslaught” from the company complete with 90 original films per year ranging from $20 million indies to $200 million blockbusters. Last year, the company released 72 original features; 2020 will see more than 120 original films released when all is said and done. Clearly, the streamer has made original movies a top priority, which coincides with an explosion in the company’s annual content budget. (A January forecast from BMO Capital Markets projected that Netflix will spend $26 billion per year on content by 2028, or more than the annual GDPs of countries like Iceland, El Salvador, Senegal and many more.)

Yet original films that premiere on Netflix generate the majority of viewership within the first week or weekend. In fact, Netflix original films rarely maintain a tangible top-tier grip on consumers beyond two weeks, which refutes Sarandos’s claim that they have the same cultural impact as a $1 billion blockbuster. The Entertainment Strategy Guy, using Nielsen data from March 30th to October 18th that measures viewing time, revealed a significant decay rate for Netflix original films. As seen below, there are steep drop offs in hours watched from Week 1 to Week3.

“The week 3 numbers is the maximum number of hours per day a film could have received based on the number 10 film in Nielsen’s streaming rates,” he wrote. “The actual number could be even lower.” Add Bird Box, The Irishman and Murder Mystery—the only other films that Netflix confirmed opening weekend and 28-day viewership totals for—and it creates a list of 9 major films that saw significant viewership decay over its first three weeks.

As Andrew Rosen pointed out in a recent PARQOR newsletter, “The cultural impact of a Netflix movie release and a Disney theatrical movie release are not the same because they are magnitudes different in length.” Star Wars: The Rise of Skywalker was in theaters for 13 weeks and Avengers: Endgame muscled it to 20 weeks. Streaming films aren’t remaining relevant for equal stretches of time despite a near permanent presence on at-home platforms.

Samba TV, which measures viewership across 35 million worldwide Smart TVs, told Observer that Borat Subsequent Moviefilm drew 1.6 million U.S. household streams on Amazon Prime Video during its opening weekend (Thursday through Sunday) and Disney+’s Mulan pulled in 1.12 million household streams on Disney+ Premier Access ($30) over Labor Day Weekend. Again, it’s not remotely a direct parallel for a number of reasons including the disparity in sample size. But at an average ticket price of $9.01, the R-rated Joker sold upwards of 10 million U.S. tickets in its opening weekend ($96.2 million) last year.

Another comparison that Rosen points out is that The Rise of Skywalker generated 2.24 million ticket-buyers in its fourth week while seeing roughly one million ticket buyers in weeks six and seven. Again, this suggests a level of long-term interaction between product and consumer that streamers can’t yet match. For comparison, the Season 2 premiere of Disney+’s The Mandalorian drew 1.04 million households on its opening day (Oct. 30). That’s impressive, but due to the fragmented nature of streaming services such as Disney+, that are only available in 20-plus countries, a wide theatrical release offers a greater global reach.

Even Netflix, with 195 million worldwide subscribers, can’t provide the same elongated impact as a traditional theatrical release. Enola Holmes—one of Netflix’s most popular SVOD films in Q3, per Reelgood—topped out at more than 18 million hours watched in its first week, taking the No. 2 spot among SVOD’s 10 most-watched titles in that seven day frame, per Nielsen data. In Week 2, it dropped to 8.9 million hours (-50%) and then fell out of the top-10 in Week 3.

Then there’s the business element to consider. Theatrical films sell tickets in individual units rather than one household purchase or stream that can include multiple viewers. This is one simple but primary reason why the economics of releasing blockbuster films at home don’t make much sense if a studio is trying to turn a profit. The ability to monetize is far more difficult for streamers than it is for legacy studios. In terms of perception, blockbuster box office grosses will always be a more tangible measure of high-end success than Netflix’s self-reported viewership stats (which used to cover an account consuming 70% of a film and now only covers any account that consumes at least two minutes of a film) or third-party metrics.

Extraction, which Netflix claims is its most-watched original film ever, is the only Netflix movie to actually compare to a real $1 billion box office film such as The Rise of Skywalker in terms of Google Trends search traffic, which is an anecdotal measurement of interest.

Disney+’s Hamilton, likely the biggest overall streaming hit of 2020, still doesn’t quite compare to box office champions such as Avengers: Endgame (nor should we really expect it to). 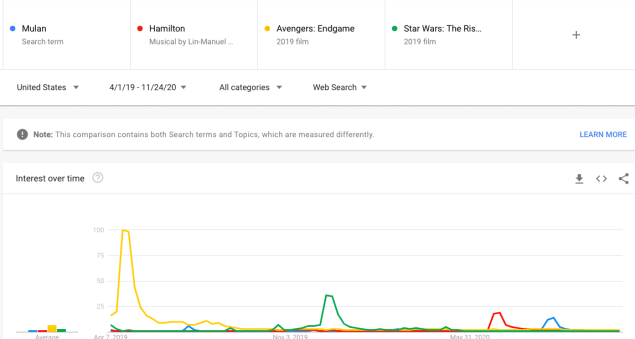 The overarching point of all this is that streaming films, which are adorned with significant value by consumers and supported at great cost to the SVOD platforms, burn bright but quickly as compared to traditional hit movies. They do not possess a cultural impact on par with a $1 billion box office hit, as Sarandos claims. As such, it’s fair to at least ask the question of how much value they are returning given the immense investment required. 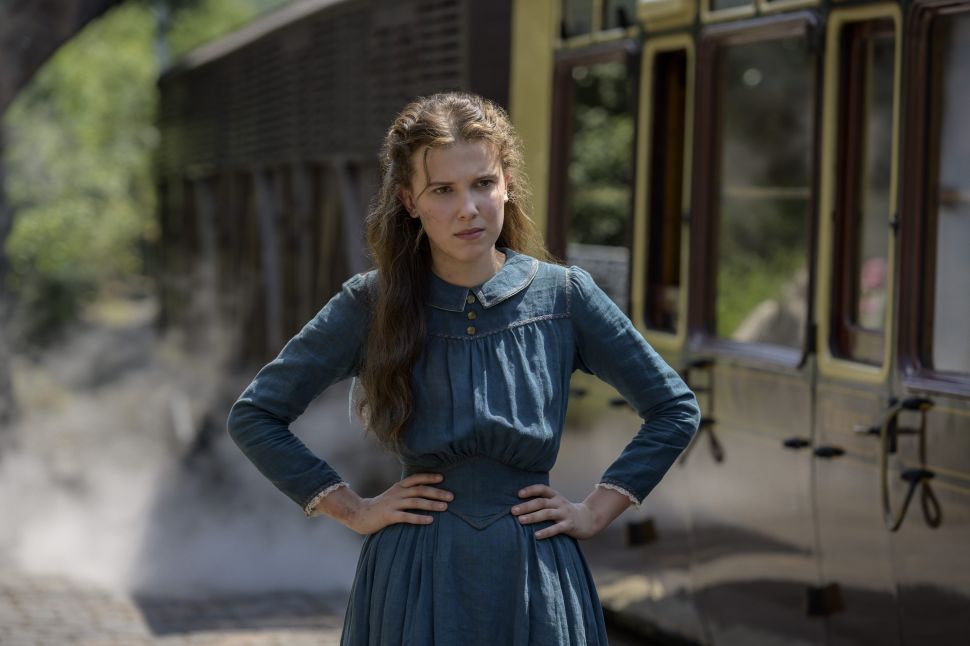