Sam Gilliam’s new show at Pace in Chelsea (through December 19) is a profusion of 44 paintings, sculptures and works on paper. Even for a show that was originally set to open in February—giving the artist an extra six months to prepare—there is a lot of work here, enough to make the vast space feel like a museum exhibition. All the work is new, and, I’m told, all but a few works are already sold.

Gilliam’s new paintings are in the first spacious room at 540 West 25th Street. The first ones you see, beveled at the edges to remind you that Gilliam sees them as objects as well as paintings, are in a light palette, some with faint pinkish under-coloring, some with a green that called De Kooning to mind. Others, once you turn a corner, are blue-black dark and luminous, turning aquamarine depending on where you stand.

On the first light-colored canvases, the paint feels spattered, so the feel is more energized than contemplative. Gilliam then spreads it around with a garden rake, and applies scraps of wood on the surfaces. It’s an unruly textural mix.

On the darker works, the paint looks thicker, and those areas of thickness with chunks of wood catch the light, an admixture of mystery and a reassuring glow, seductive yet distant. You might think of stars, as Gilliam seems to have done. One with the hint of a lighter underlay is titled Heroines, Beyonce, Serena and Althea—an homage to the singer and to two African American tennis players. In case you haven’t surmised, Gilliam played tennis. (Serena Williams owns his work.) Lest the heavenly reference be missed, Gilliam calls one of the dark light-flecked works For John Lewis, in honor of the late congressman and civil rights pioneer.

Both Gilliam and Lewis came from the Deep South. Gilliam, born (as was Elvis Presley) in Tupelo, Mississippi, is the son of a carpenter. His family moved to Louisville, Kentucky, when he was six. Gilliam studied at the University of Louisville, and taught high school there for eight years. He moved to Washington D.C. in 1962. “Washington was my Paris,” he would say. How many artists can say that? He would get to Paris eventually, and also to Japan.

Washington was a center of abstract painting then. It’s well-known that Gilliam found himself influenced by the Color Field painters Kenneth Noland and Morris Lewis—mavericks in their statements of pure color. He then made a path beyond them, with strong infusions of jazz and Black history.

His signature twist on conventional painting was to take his canvas off the frame and display (or hang) his works as if they were drapery, throwing off the expectation of a flat rectilinear work, and reminding everyone that paintings were also objects. At the same time, he started putting beveled edges on his paintings that stayed on the wall.

The experimentation didn’t end there. Gilliam made monochrome paintings and paintings on metal. At Pace, there’s more.

Behind a partial partition, there are pyramid-like wooden shapes in smooth light plywood and aluminum that stand about four feet high, on wheels.

These new works could not look more different than Gilliam’s new paintings. Oliver Schultz, who curated the show at Pace alongside Arne Glimcher and Andria Hickey, said Gilliam began to think of them when preparing his last major museum retrospective at Kunstmuseum Basel in Switzerland in 2018. The artist was struck by the number of Africans living in Switzerland, and was then drawn into thoughts about ancient Sudan and African architecture. Eventually the pyramidal shapes emerged from those reflections. “He stains the plywood and the grain becomes like a brushstroke. He thinks of these as paintings, they’re three-dimensional paintings. But they’re also a musical composition. They’re on wheels, and they can be configured any number of ways. So there is a choreographic, improvisational element to how these works get deployed in space,” said Schultz.

Gilliam has another sculptural shape on the walls. In this gallery it’s a plywood disc, Black 96″ Disc, with a metal center and a hole in the middle. The shape itself feels like a quote from Kenneth Noland, a godfather of Color Field painting. In this case, Gilliam takes ownership of the Color Field reference by removing the color, but not so much as to keep the wood grain from showing through.

Down the street, at 510 West 25th, Pace’s nearby outpost, we see additional pyramidal forms, but more striking was another round disc mounted on the wall, this one with the plywood stained blue, so the grains emerged as veins might in marble, with the effect in plywood of a smoky dream.

Around another corner are works on paper, washi (traditional Japanese) sheets each soaked and soaked in a single color, then framed and mounted—here without glass to optimize the feel and texture of the surface for the viewer. A dark orange square was the most powerful combination of tone and texture, but each one seemed so deeply colored that you became aware of what might be called the Gilliam effect, where two dimensions become three.

The Gilliam effect, on the art world, for the last few years, seems to be a process of recognition and renaissance.

Recognition has meant that Gilliam is getting major gallery and museum shows. Besides Pace in New York, he is represented in Los Angeles by David Kordansky, a power on the West Coast.

Although this recognition process has been more gradual than sudden, Europeans discovered or rediscovered Gilliam at the Kunstmuseum Basel show in 2018 that coincided with Art Basel, not a bad place to be, since abstract art sells well in Europe, Asia and the Middle East. (The catalogue for that show can be bought at Pace—get one while they last.)

A Sam Gilliam retrospective is being prepared for 2022 in the artist’s hometown, at the Hirshhorn Museum and Sculpture Garden. More than a quarter-century after his last museum show in Washington, it’s likely to be a victory lap.

Add to that Gilliam’s inclusion in the exhibition “Soul of the Nation: Art in the Age of Black Power,” showing works by African American artists from 1963 to 1983, that went from the Tate Modern in 2017 to Houston last summer. A lot more museums wanted this show than could get it. You can say that now about paintings by Sam Gilliam.

The notion of renaissance underscores the renewed attention that Gilliam deserves. It’s also evident in the volume of work on view, impressive for any artist. More so for an artist who is 86. For the many who still don’t know Gilliam well, the discovery won’t just be these works at Pace, but so much that came before. 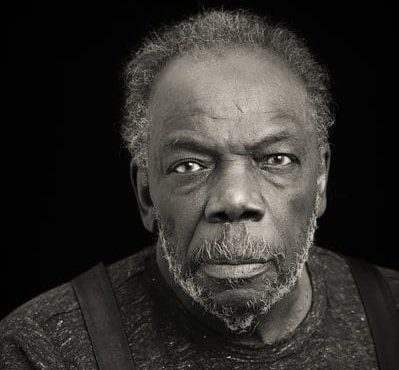