The Mandalorian is back for a second season to the delight of Star Wars fans everywhere. More importantly, the hit Disney+ series has returned to reestablish the Mouse House’s streaming service as a dominant leviathan in the digital world. But if Disney+ truly aspires to be a Netflix slayer, The Mandalorian is going to need to become an even bigger monolithic attraction than it already was in Season 1.

So, how does The Mandalorian compare to the streaming launches of other recent premiere digital series and has its audience grown in its sophomore season? Here’s what a handful of third-party measurements tell us.

Reelgood is an extensive streaming guide that tracks every TV show and movie available online. The service boasts upwards of 2 million U.S. users, which helps to provide a composite of domestic digital viewership. According to their data provided to Observer, the Season 2 premiere of The Mandalorian accrued a 5.7% streaming share across its opening weekend (October 30-November 1). 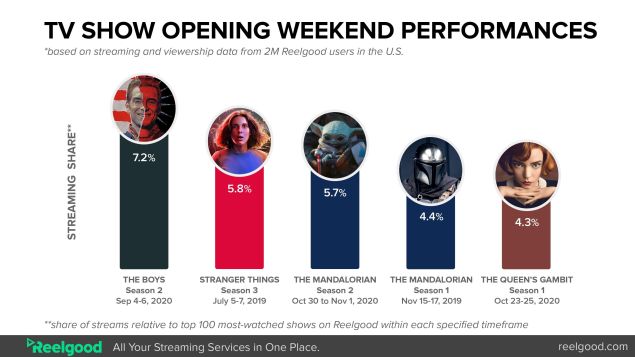 This marks an improvement from the blockbuster show‘s Season 1 premiere, but still falls behind the debut weekends of Netflix’s Stranger Things 3 and Amazon’s second season of The Boys. However, it’s important to note that Netflix drops entire seasons at once while the first three episodes of The Boys Season 2 were immediately available. The Mandalorian only releases one episode per week on Disney+. So the show is drawing a massive streaming share with less hours of content available to consume. Impressive.

Samba TV compiles viewership data across its 35 million TVs globally, providing a measurement of Smart TV usage and the programming that audiences watch. On Oct. 30, the Season 2 premiere of The Mandalorian drew 1.04 million households, according to SambaTV data provided to Observer. That marks an increase of 73% compared to the show’s Season 1 premiere on Nov. 12, 2019.

Of course, the streaming market looks entirely different now than it did just 12 months ago. One of Disney+’s first original offerings, The Mandalorian premiered the day that Disney+ launched in the U.S. Thanks to the pandemic and the increase in streaming, Disney+ now has more than 60 million subscribers, a milestone it didn’t expect to reach until 2024. And of course, since the first episode, the world (especially the internet) has fallen in love with the Child, a.k.a. Baby Yoda, a character who was intentionally kept out of the initial marketing for season 1. This helps to explain the show’s growth and why it’s emerging as one of the most in-demand digital originals.

Parrot Analytics’ audience attention measurement system captures an audience behavior dataset. The company sifts through social media, fan ratings, and piracy data to represent audience demand, which reflects the desire and engagement expressed for a title within a market. Here, they compiled a time shift chart to showcase the premieres of comparable high-profile digital originals. What’s particularly noteworthy is that The Mandalorian is tracking ahead of Netflix’s The Umbrella Academy (a major hit) even though the latter has the advantage of being a binge release versus Mando‘s weekly delivery. 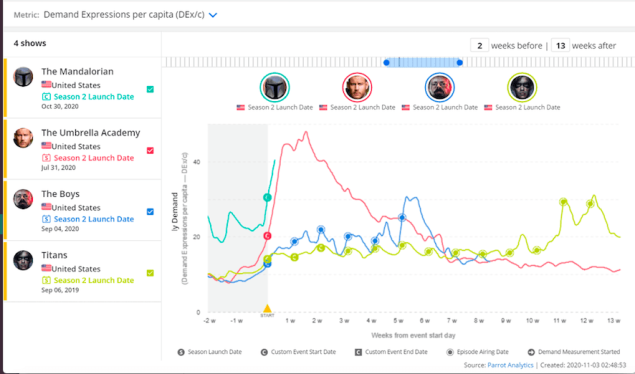 Parrot Analytics also examined the season-over-season growth (premiere date +2) for these series where Mandalorian is once again ranking well. In terms of major series moving from Season 1 to Season 2, The Mandalorian has grown more than The Boys, Star Trek: Discovery, Cobra Kai, The Handmaid’s Tale and Titans. While it still ranks behind The Umbrella Academy in terms of s-o-s improvement, it’s clearly one of the top streaming originals in the industry.

ANTENNA observes transaction data on several million U.S. consumers (on a strictly anonymous, opt-in basis). Using this data, they are able to tell when people Signed-up, when they cancelled, when they switched services, and so on.

Here’s how Season 2 provided Disney+ with a boost. 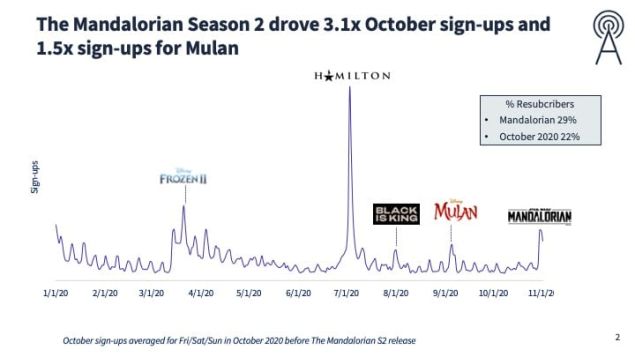 Season 2 of The Mandalorian drove sign-ups 3.1x the October benchmark and 1.5x the number that Mulan generated, according to ANTENNA data provided to Observer. Around 29% of sign-ups for Mando Season 2 were re-subscribers, or those that had previously cancelled their subscriptions, compared to the 22% October benchmark. This suggests there is a significant portion of viewers who signed up to Disney+ to watch the first season, cancelled after it was over, and then re-subbed for Season 2. This appears to be the case particularly in adults with no children, which checks out given the skew of the content slate. Users who signed up for Season 2 were more likely to be male aged 26-43 and in a household without children, per ANTENNA. 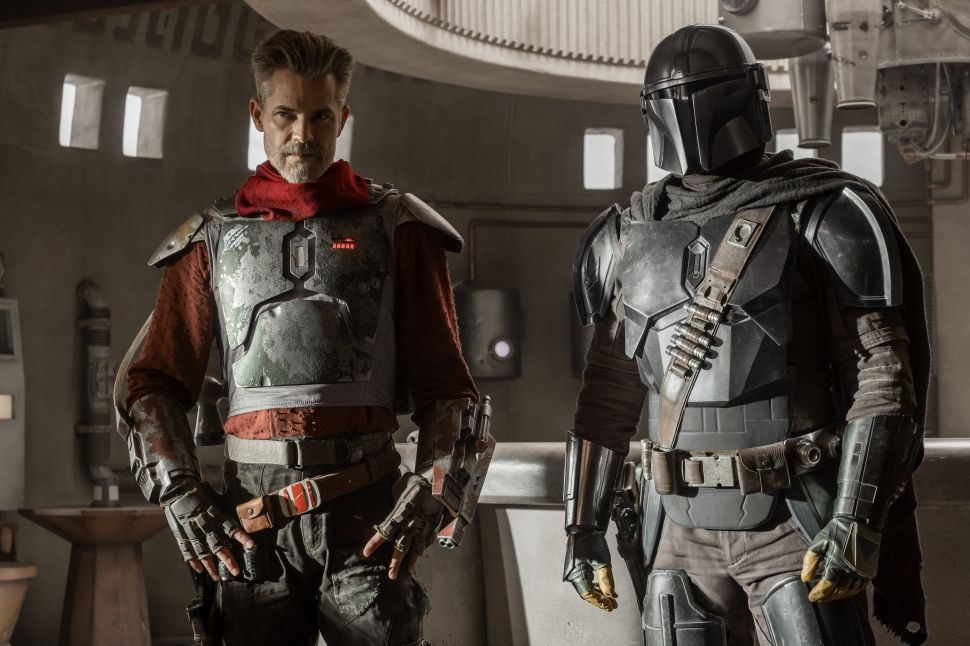