Tesla just received what could be its largest pre-order of Tesla Semi, a prototype-stage electric class-8 truck, to date from a truck leasing company. The order means up to $100 million in potential revenue, despite the fact that Tesla has yet to start volume production of the truck.

Pride Group Enterprises, which has a truck-leasing business in the U.S. and Canada, announced Wednesday afternoon that it had placed a reservation for 150 Tesla Semi, with the option to buy 350 more depending on financing availability and how the first batch works out.

The huge order followed a 130-truck reservation by Walmart in September. The retail giant envisions incorporating Tesla trucks as part of its “zero emissions by 2040” goal. This is not its first transaction with Tesla, having been the automaker’s earliest Semi customer, having ordered 15 trucks immediately after Tesla unveiled the heavy-duty truck in 2017.

In total, Walmart’s and Pride Group’s orders could represent a potential revenue of between $42 million and $126 million, depending on vehicle configuration and final order size.

While reservations don’t always translate into actual sales, pre-orders of Tesla Semi are supposed to be a more accurate indicator of consumer interest than that of Tesla passenger cars, because the truck requires a much higher deposit. Tesla originally asked buyers to put down $5,000 per truck and later increased the amount to $20,000 for the base production version and $200,000 (the full price) for the limited “Founders Series” version. (For comparison, the Cybertruck requires just $100 and it’s fully refundable.)

Tesla Semi has been stuck in the prototype stage for almost three years now. And a number of formidable competitors have emerged during this time. Phoenix, Ariz.-based Nikola Motors has a comparable class-8 truck, powered by hydrogen fuel cells, that has attracted a ton of investor and market attention; Toyota is mulling a similar fuel cell truck; and Volvo recently debuted an electric semi-truck that’s expected to hit the road in Europe next year.

Now it all comes down to which company can deliver on mass manufacturing first. Tesla CEO Elon Musk has pushed for Semi production several times. In June, he urged Tesla’s production team to prioritize the heavy-duty truck over other models, saying “it’s time to go all out and bring the Tesla Semi to volume production.”

Tesla plans to offer Semi with two range options (300 miles and 500 miles) priced at $150,000 and $180,000 respectively. Musk has said Semi’s battery and powertrain will be made at Tesla’s Nevada Gigafactory, with the rest of the work distributed across other facilities, including the Texas Gigafactory under development. 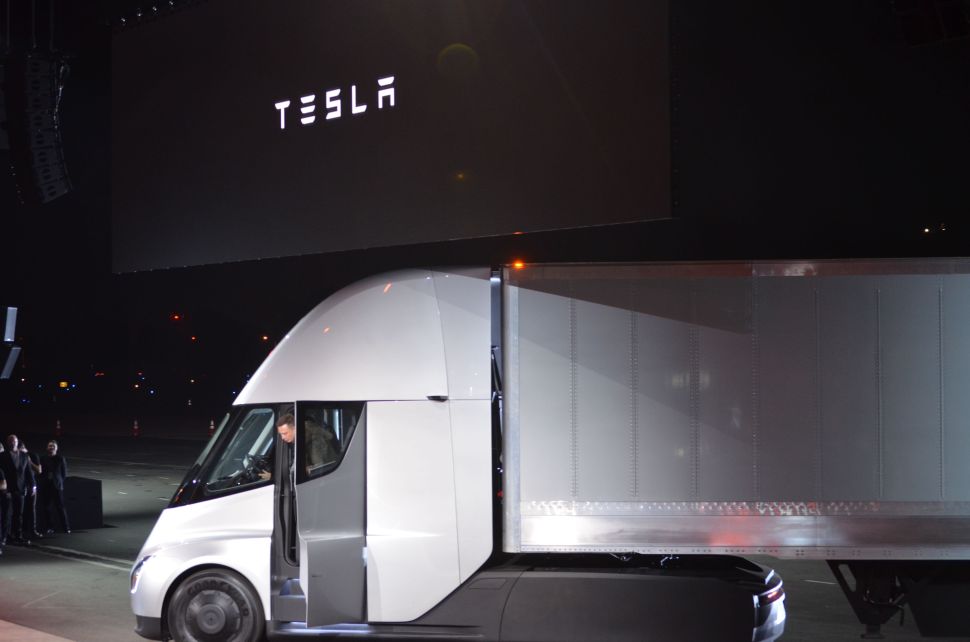