Tesla CEO Elon Musk has a history of befriending the bosses of the world’s largest gasoline carmakers, notably Volkswagen’s Herbert Diess. But he hasn’t been able to break through to with Toyota president Akio Toyoda, who has always been quiet about Tesla—well, until now.

“We are losing when it comes to the share price, But when it comes to products, we have a full menu that will be chosen by customers,” Toyoda, the grandson of the automaker’s founder, said during an online conference on Friday. He made the comments while discussing the automaker’s third-quarter financial results and 2021 forecasts, first reported by Bloomberg.

Continuing his cooking analogy, Toyoda added, “Tesla says that their recipe will be the standard in the future, but what Toyota has is a real kitchen and a real chef…They aren’t really making something that’s real, people are just buying the recipe. We have the kitchen and chef, and we make real food.”

With the global economy opening up despite the ongoing pandemic, Toyota saw a strong rebound in passenger car sales in the third quarter—so strong that the company has more than doubled its revenue forecast for the current fiscal year, which ends on March 31, 2021.

Toyota and Volkswagen are the world’s top two automakers by sales volume, each manufacturing and delivering over 10 million cars every year, while Tesla in best year to date (2019) delivered 367,500 vehicles, or less than 5 percent of either Toyota’s or Volkswagen’s output.

And yet, in July, Tesla toppled both companies in market cap to become the world’s most valuable automaker. Their production capacity, however, is much lower.

Toyota is best known for producing affordable, reliable passenger cars. Due to the high cost of fully electric cars, the Japanese auto giant has been sticking with the more affordable hybrid models, such as the popular Toyota Prius. Yet, like every other gasoline carmaker, Toyota does have a plan to embrace the electric future. The company has said it aims to sell half a million electric vehicles annually in 2025. By that time, Tesla is expected to sell several millions of cars every year, and Volkswagen aims to sell over a million vehicles.

Acknowledging Tesla’s leadership in the electric vehicle sector, Toyoda said there’ a lot his company can learn from its rival, such as Tesla’s ability to generate sizable profits from software updates and batteries. 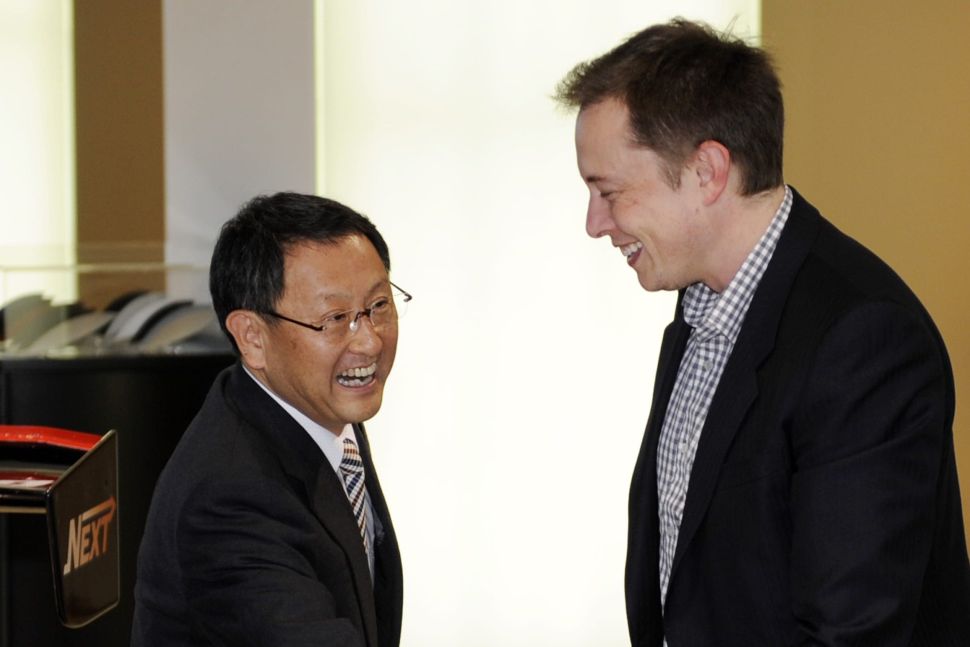