On Sunday, Richard Branson’s Virgin Hyperloop made history with the first successful crewed test of its ultra-fast “tube” system in a Nevada desert, a major milestone in the journey toward the commercialization of the nascent ground transportation technology.

“Exhilarating! I couldn’t think of another word to describe the experience,” Luchian told Observer in an interview on Wednesday.

The shuttle sped up from zero to 107 miles per hour in just six seconds. Luchian said she felt a pushback force during the acceleration that is about three times the force one experiences during a commercial plane takeoff.

“I’m told it’s very much like flooring the pedal on a sports car, although I haven’t had that experience before. I certainly felt a little pushback, but nothing uncomfortable,” Luchian said of the acceleration experience.

In a hyperloop system, a passenger or cargo pod travels on magnetic rails inside a low-pressure tube with little or no air, which allows for extremely high speeds. Due to the limited length of the prototype tube, the crewed test could only speed up to 107 miles per hour, but in a full-size system, a shuttle can move at over 600 miles per hour. That’s more than twice the maximum speed of the world’s fastest ground transportation, a 19-mile magnetic levitation (Meglev) commercial train route in Shanghai, China, which also operates on magnetic rails but does so above ground, in open air.

At that speed, a passenger can travel from New York City to Washington D.C., a four-hour drive, in 30 minutes, and from Los Angeles to San Francisco, a 1.5-hour flight, in under 45 minutes.

“For a petite vehicle, I find it quite spacious,” Luchian said. “It was like sitting in the back of a limo. I had a lot of legroom between my knees and the door.”

The test cabin wasn’t tall enough for Luchian or Giegel to stand upright. But the future commercial version will be more spacious and allow standing up and walking around, she added.

Much of Luchian’s job involves listening to consumer feedback and perfecting Hyperloop’s user design before commercial rollout. A frequent question she gets from her focus group is whether the cabin will have windows and natural light during a journey.

“You wouldn’t see much because you’ll be inside a tube. But people still want a sense of connection to the outside world. They want to know where they are,” Luchian said.

There will be no direct view of the outside in the final version of Virgin’s hyperloop, but the company is considering installing false windows and false skylight that could imitate the changing sunlight throughout the day in future passenger pods.

Prior to Sunday’s passenger test, Virgin had conducted more than 400 unoccupied tests on the Vegas site. The company recently finalized a plan to build a $500 million certification center and test site in West Virginia. The next steps include conducting more passenger tests and seeking regulatory approval to build out the actual first hyperloop system. 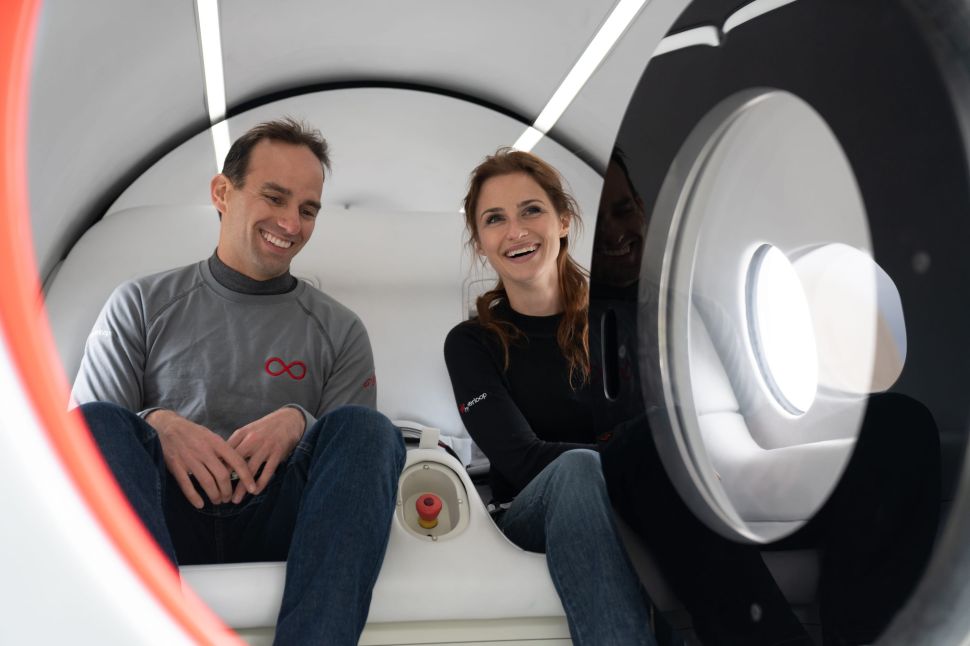