For better or worse, our families define us, and the holidays serve as potent line readings of those definitions, whether we manage to gather with them for a meal or not. This weekend’s Thanksgiving streaming options reflect that reality. Observer Entertainment has curated the guide below to help figure out what to watch this weekend on your off-hours. The major streaming services alike are represented below, from Netflix to Hulu to Amazon, and we’ve offered recommendations for for all of them, including both new releases as well as hidden gems that may be buried between the cracks.

Best described as the ultimate fall vibe, Taylor Swift’s latest album and the new documentary film about how it got made, Folklore: The Long Pond Studio Sessions, feels like a warm blanket and a hot cup of coffee on a cold morning. The film is a welcome reminder of just how smart and sophisticated Swift is as a songwriter and storyteller, as well as a showcase for her collaborators, the musicians Jack Antonoff and Aaron Dessner. Watch Folklore: The Long Pond Studio Sessions on Disney+.

One Day at a Time, which follows the lives of the Cuban-American Alvarez family, adapting the original One Day at a Time for the modern-day. It’s anchored by the performance of Justina Machado as a United States Army Nurse Corps veteran and single mother of two. The characters on One Day at a Time all face individual struggles and problems, but at the end of the day rise to meet them as a family. Watch One Day at a Time on Netflix.

This one’s a Christmas movie, and a defiantly gay one at that. Happiest Season is the story of a woman, Abby (Kristen Stewart), head-over-heels in love with her girlfriend, Harper (Mackenzie Davis). Abby’s all set to propose at Harper’s family’s holiday gatherings when she learns… Harper has not come out to them. The ensuing romcom directed by Clea Duvall is a buoyant and funny film, warmly amplified by performances from Dan Levy, Alison Brie, Aubrey Plaza and Mary Steenburgen. Watch Happiest Season on Hulu.

An indispensable classic, A Charlie Brown Thanksgiving is one of the better Peanuts holiday specials. (Nothing really matches the iconic, anti-capitalist Christmas one, though.) It has jokes. It has the football gag. It has a positive, unifying message—if one that obviously leans heavily on the holiday’s colonial myth-making. And it has Snoopy and Woodstock, the purest members of the Peanuts cast, gorging themselves. Watch it for free, not only on Apple TV+ but on PBS. Watch A Charlie Brown Thanksgiving on Apple TV+ or PBS.

The best new cooking of the season, full stop, is Stump Sohla on YouTube. Part of the Babish Culinary Universe (like Binging With Babish), Stump Sohla is premised on assigning a mad-scientist wizard chef, Sohla El-Waylly, tasks to “stump” her. These might be challenges like a freeze-dried “Astronaut Thanksgiving” or a full high-end tasting menu made using only convenience store food items. Over the course of roughly a half-hour, you’ll watch Sohla imagine her recipe and then gamely attempt to make it work. Whether it does or doesn’t is hardly the point; the point is watching her journey as she stretches her culinary limits and the edges of home-cooking possibility. Watch Astronaut Thanksgiving on Stump Sohla on YouTube 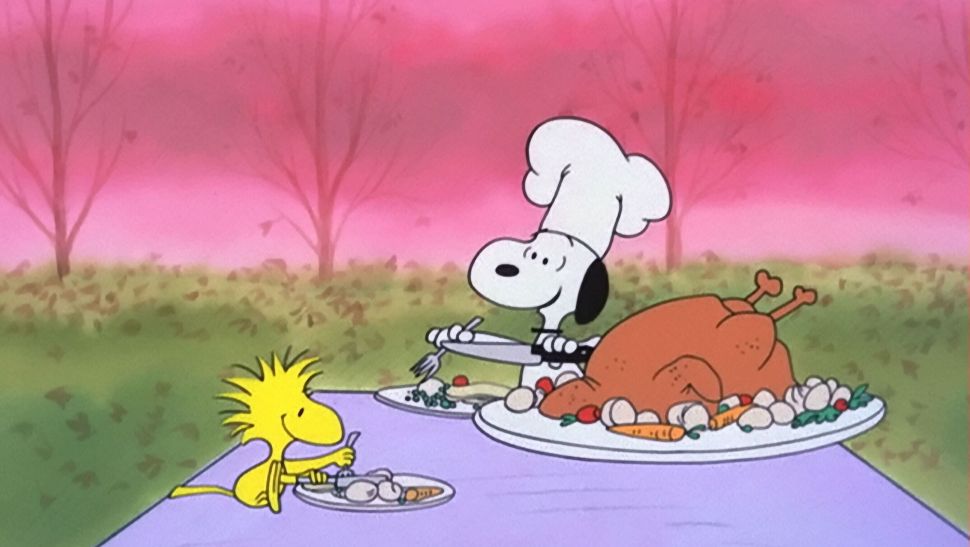