There are certain types of creatives who seem to have the ability to function during any kind of calamity, and Banksy is one of them. Throughout 2020, the elusive graffiti artist has popped up regularly to debut artwork poking fun at the drudgery of quarantine, as well as more poignant creations paying homage to the nurses on the front lines of the coronavirus pandemic. Now, Banksy has re-emerged once again with a new graffiti piece that’s more in line with his irreverent sense of humor. Via Instagram, Banksy confirmed that a work depicting an old woman sneezing out her dentures titled Aachoo!! had indeed been made by him.

The work, which first appeared on the side of home on Vale Street in Totterdown in the U.K. early on Thursday morning, is also positioned cleverly on an inclined street. As demonstrated by a post on Banksy’s Instagram, this means that fans of the artist will likely flock to the art site to post pictures where it looks like they’re being blown away by the sneeze of the woman in the artwork. The location is actually already a minor destination for visitors, as it’s the steepest residential street in England. The art’s subject matter is certainly perfect for this moment in history, where sickness and the risks associated with sneezing in public are at the fore of most people’s minds.

Banksy has also enjoyed a lucrative year in the auction world, even if he does have a distinct amount of contempt for contemporary art collectors. Back in September, a rare proof of the artist’s iconic image Balloon Girl – Colour AP (Purple) sold at auction for $1 million, despite the fact that the auction itself was entitled “Banksy: I can’t believe you morons actually buy this sh*t.” Perhaps more than any other modern artist, Banksy seems to have perfected the formula of getting people to pay attention to you, no matter what you do and no matter how much you insult your audience. Whether you respect the strategy or not, it’s certainly working. 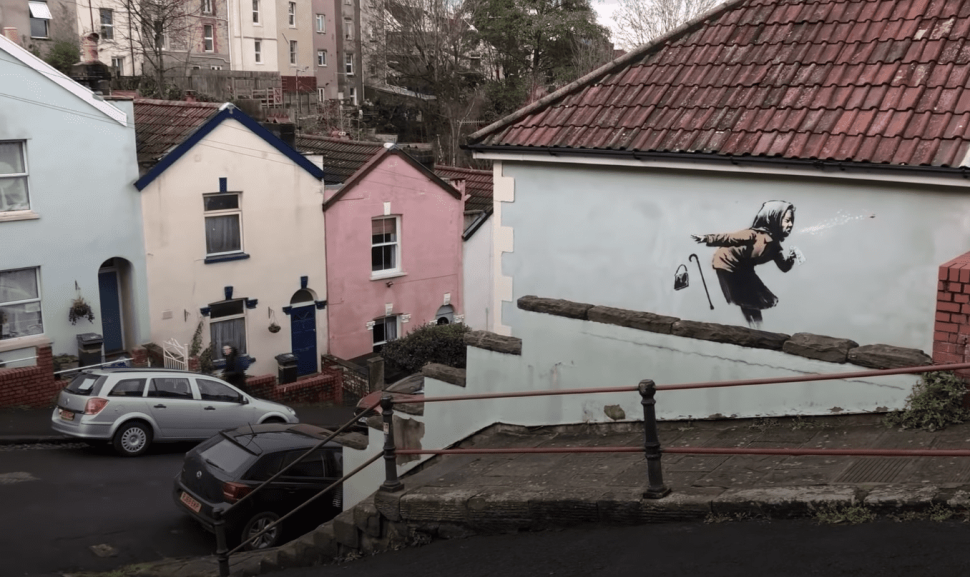