The evolution of modern television from comfort viewing to groundbreaking entertainment can trace its roots back to the 1990s. Many series, including NBC’s Homicide: Life on the Streets and HBO’s The Sopranos, helped usher in what is now known as the Golden Age of Television. Advances in media distribution enabled more creative freedom which led to an explosion of serialized quality. The way stories were told and delivered on the small screen was forever altered.

With the rise of at-home entertainment options such as DVDs, DVR, and then streaming, the Golden Age of Television soon gave way to the Peak TV era, in which the number of scripted series began to rise dramatically from year to year as new platforms popped up across the market. What The Sopranos began was carried forth by acclaimed series such as Lost, Mad Men and Breaking Bad before Game of Thrones and The Walking Dead would push the small screen into blockbuster spectacle.

With 2020 consumed by the coronavirus pandemic, television has undergone yet another transformation, though one that won’t be clearly defined or understood for some time. What we can confidently observe is that direct-to-consumer entertainment has surpassed traditional moviegoing and linear broadcasts. This positions cable and streaming as the dominant Hollywood building block moving forward. As such, here are 12 upcoming new shows that could define the next era of TV consumption in 2021 and beyond.

The blockbusterization of TV—in which streamers and networks are building around high-profile intellectual property that audiences are familiar with—was arguably inevitable. So if smaller high-quality series such as Rectify that helped fill out the Peak TV Era must be lost in favor of big budget miniseries, they damn sure better earn it. Fortunately, WandaVision will take the Marvel Cinematic Universe into new directions, exploring alternate realities through the lens of grief and mental illness.

Thanks to super producer Kevin Feige’s assembly line approach, the immaculately constructed and interconnected MCU can occasionally feel a bit flavorless. WandaVision—which Disney+ needs to be a hit—is poised to inject some much-needed fresh perspectives and boundary-pushing weirdness.

Netflix’s highly-anticipated live-action adaptation of this iconic anime series was originally set to debut in 2020, but an injury suffered by star John Cho and the coronavirus pandemic forced the project’s delay. Fortunately, production resumed back in September, which means the flashy new series could be ready for primetime in late 2021.

Despite the development struggles of the streamer’s live-action version of Avatar: The Last Airbender, adapting high-profile animated series remains a key strategy moving forward. Netflix clearly has high hopes for Cowboy Bebop as the writers room was already developing a second season of the futuristic sci-fi western as of April.

In January, it was reported that Bong Joon Ho was teaming with Adam McKay and HBO to adapt his Best Picture-winning film into a new series. Details were scarce, but the idea of two pointed and unique voices such as Bong and McKay working together from the foundation of Parasite was a thrilling revelation.

“I had all these key ideas accumulated from when I started writing the script,” Bong Joon Ho told TheWrap. “I just couldn’t include all those ideas in the two-hour running time of the film, so they’re all stored in my iPad and my goal with this limited series is to create a six-hour-long film.”

In March, Collider reported that three-time Oscar nominee Mark Ruffalo is being eyed to play one of the series’ leads. Given the lack of official movement, it’s doubtful that the Parasite series can begin production until early 2021 at the best. Whenever it does arrive, it’s sure to be one of the more intriguing small screen projects.

Amazon is making the boldest statement yet in blockbuster TV by preparing to spend $1 billion on its multi-season Lord of the Rings TV series, which would make it the most expensive series in history (no wonder HBO passed). Shrouded in mystery, not much of the actual plot is known, though we have unearthed a few key character details. Production resumed in New Zealand back in September, putting Lord of the Rings on pace for a potential late 2021 arrival.

Based on the novels from J. R. R. Tolkien, the show was developed by Star Trek Beyond writers J.D. Payne and Patrick McKay. Amazon has already ordered a second season of the show (with a minimum of five en route), which will take place during the Second Age of Middle-earth, thousands of years before The Hobbit and Lord of the Rings film trilogies. The Second Age is most notable for seeing the rise of Sauron and his creation of the One Ring.

We can debate the relative creative merits all we want, but the collaborations between writer David E. Kelley and his new muse Nicole Kidman have resulted in zeitgeist-capturing HBO series Big Little Lies and The Undoing. Given the successful track record, it’s no surprise to see the duo run it back for a third time.

We are more than ready for ruminative conversations about meaning set against the backdrop of expansive Australian settings.

James Clavell’s 1975 novel of the same name was further immortalized by the medium-shifting success of NBC’s 1980 television adaptation, which helped spark the big budget miniseries. Four decades later, FX is attempting to remake the ambitiously epic show, which is not without its complications.

FX first announced its 10-episode reboot in 2018, but it was soon put on hold and original writer Ronan Bennett departed in January. From there, FX started from scratch with Counterpart creator Justin Marks (Top Gun: Maverick, The Jungle Book) leading the way. Normally, this would be a significant cause for concern. But Counterpart was such a well put together and under-appreciated series that we may actually be more excited now.

Shōgun is set in the early 17th century and revolved around Pilot-Major John Blackthorne, who becomes stranded on the east coast of Japan after a storm. Blackthorne finds himself assimilating into Japanese culture amid a period of great change within the country. FX plans to film in both Japan and the U.K.

This 10-episode post-apocalyptic limited series drama is based on the Emily St. John Mandel bestseller of the same name and hails from Maniac creator and The Leftovers producer Patrick Somerville. Atlanta and Barry breakout filmmaker Hiro Murai will direct. Somerville has a knack for human drama that exists against the backdrop of otherworldly elements while Murai is one of the most exciting up-and-coming directors working today.

On the page, Station Eleven reads like elevated disaster material as the book tracks the past, present and future of a devastating outbreak that decimates most of the world’s population (the series was ordered long before the coronavirus pandemic). It has an understated philosophical element that is well suited to the prestige TV era. Imagine a grounded mix between Steven Soderbergh’s Contagion and Stephen King’s The Stand.

In January, it was reported that Saturday Night Live breakout Cecily Strong would headline this new Apple comedy executive produced by the legendary Lorne Michaels. Apple doled out a straight-to-series eight-episode order.

Strong is easily one of the most versatile and talented performers on SNL who has long been destined to expand her horizons beyond the sketch comedy show. Schmigadoon is described as “Groundhog Day meets Enchanted” and revolves around a couple on a backpacking trip designed to reinvigorate their relationship before they discover the magical town of Schmigadoon, where everyone acts like they’re in a studio musical from the 1940s. Points for creative boldness as the out-there concept is suited to Strong’s musical chops and undeniable energy.

Cinco Paul and Ken Daurio (The Lorax, the Despicable Me franchise) serve as writers and executive producers.

From The Raid creator Gareth Evans, Gangs of London is a British action crime drama that follows the struggles between rival gangs and other criminal organizations in present-day London. The show initially premiered on Sky Atlantic in April to largely positive reviews. Since then, the series has made its way to streaming service AMC+, but will be debuting on linear basic cable network AMC in early 2021.

Evans rose to prominence with the action crime franchise The Raid, which featured arguably the best martial arts fight choreography of the last two decades.

Writer and director Morgan Cooper captured the attention of the internet last year when he released his short film Bel-Air, a dramatic reimagining of Will Smith’s beloved sitcom The Fresh Prince of Bel-Air. The modernized and more serious minded take became an immediate phenomenon. Soon, a bidding war broke out for the television rights, with NBCU’s Peacock beating out Netflix with a two-season straight-to-series order. Outside of Apple TV+ shelling out $300 million for two seasons of The Morning Show sight unseen, that sort of commitment rarely happens in Hollywood.

Cooper will direct and co-executive produce the series, which he is co-writing with Chris Collins (The Man in the High Castle). Collins is an executive producer and showrunner. Will and Jada Pinkett Smith’s Westbrook Studios and Universal Television are behind the series.

CBS All Access has relied heavily on the Star Trek brand with Discovery, Picard and Lower Decks. As the streamer rebrands as “super service” Paramount+ next year to compete with the Netflixes of the world, it will continue amping up the franchise content. High on the list of priorities is Star Trek: Strange New Worlds, a spinoff that follows Captain Christopher Pike and the U.S.S. Enterprise during the decade before Star Trek: The Original Series. Filming is set to take place between February and July of 2021, making a late 2021 premiere possible.

CBS All Access’s looming relaunch is indicative of the greater transition we find ourselves as we leave behind the Peak TV era for something new.

Showtime doled out an eight-episode order for the ongoing drama series Ripley, based on Patricia Highsmith’s best-selling quintet of Tom Ripley novels. Andrew Scott, who turned heads in Fleabag and Sherlock, will star in the title role, which is as excellent as any casting announcement in recent memory. Oscar and Golden Globe winner Steven Zaillian, who has generated acclaim across the spectrum with projects such as Schindler’s List and HBO’s The Night Of, will write and direct the entire first season.

In the series, Tom Ripley, a grifter scraping by in early 1960s New York, is hired by a wealthy man to travel to Italy to try to convince his vagabond son to return home. Tom’s acceptance of the job is the first step into a complex life of deceit, fraud and murder. 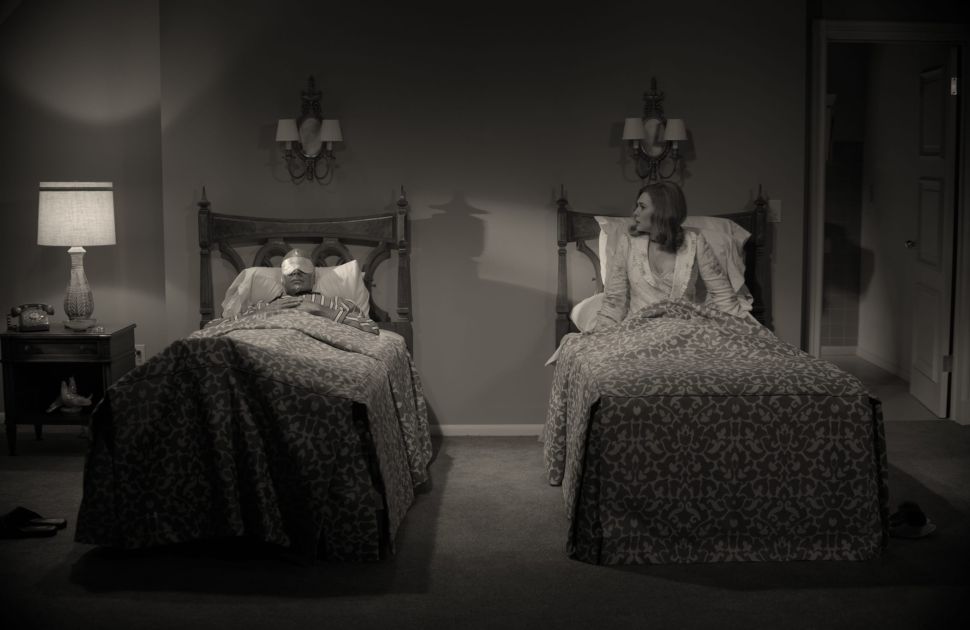