At a time when the average lifespan of a TV series is shrinking, shows from producer Shonda Rhimes are practically immortal beings. On ABC, Viola Davis’ How to Get Away With Murder ran six seasons, Kerry Washington’s Scandal ran seven, and Grey’s Anatomy—aided by what I can only assume are otherworldly forces—is still going strong in its 17th (!) season. Rhimes is a modern day Normal Lear.

But Netflix, where the prolific producer is currently stationed after signing a $100 million deal in 2017, is known for its trigger happy cancellations this year with 47 cancelled shows. What that means for Rhimes’ Bridgerton, premiering Christmas, is unknown. But I’d happily spend a number of seasons in this lavishly imagined new TV world.

From Shondaland and creator Chris Van Dusen, the 1813-set Bridgerton follows Daphne Bridgerton (Phoebe Dynevor), the eldest daughter of the well-to-do Bridgerton family as she makes her debut onto Regency London’s competitive marriage market. If you thought the machinations of the affection-starved contestants of The Bachelor was entertaining, just wait until you see how 19th-century Londoners and their social climbing families operate for hearts and status. Scheming while adorned in the colorful ensembles arranged by costume designer Ellen Mirojnick is worth the carriage-drawn ride alone.

Hoping to follow in her parents’ footsteps and find a match sparked by true love, Daphne’s prospects initially seem to be unrivaled. But as her older brother begins to rule out her potential suitors, the high society scandal sheet (Bridgerton‘s gossip column equivalent to TMZ) written by the anonymous Lady Whistledown casts aspersions on Daphne. Enter the highly desirable and rebellious Duke of Hastings (Regé-Jean Page), committed bachelor and the catch of the season give or take a royal prince. In typical rom-com fashion, the pair begin with nothing but contempt for one another despite an initial attraction, which soon grows into begrudging respect, a mutually beneficial arrangement, and potentially genuine affection. The two find themselves engaged in an increasing battle of wits while navigating society’s expectations for their future, which couldn’t be more divergent from one another.

Bridgerton, with a scandalous scope and lustful labors, is like Downton Abbey‘s downtown cousin. The Crown on spring break. It has all the performative trappings of a sumptuous royal drama mixed with many of Rhimes’ most enjoyable indulgences. Who knew a posh period piece could be so, ahem, impassioned?

The central conflict may drag needlessly thanks to a classic case of male stubbornness and an inability for characters to communicate. I get it, a romance drama needs to manufacture tension. But the only force stronger than true love here is plot armor. It’s all a rather simple fix if not for the script’s stalling tactics. But at just eight episodes, you’re not exactly stuck in the mud.

Bridgerton titillates, but also has enough on its mind to satiate. Today, we live in the age of third-party influence. Social media conditions us to measure ourselves against the curated lives of others. “Fake news” and “alternative facts” abound. A hunger for gossip is practically coded into our DNA at this point. But with Lady Whistledown’s juicy scandal sheet as a clever framing device, Rhimes and Dusen are saying that perception has always been reality.

Even though Bridgerton clearly delights in its old-fashioned setting, it still skewers the values of the era. Its upstairs-downstairs dynamic juxtaposes high society with everyone else. You need no reminder their two worlds are as different as toast and bread. The opportunities, or lack thereof, force our characters into difficult, sometimes egregious, but often understandable choices. Ruby Barker’s Marina Thompson, thrust into this upper crust world from a simpler background, represents how everyone uses whatever is at their disposal to survive such rigid cultures.

The show, far more diverse than its genre compatriots, lampoons the desire for conformity, pack mentality, and antiquated gender roles even as our characters fall prey to these philosophical traps. The creative team clearly enjoys dunking on the Karens of seven generations ago. But more than that, it manages to smuggle progressive ideas about self-determination and equality amid the provinciality of the era. That’s worth chewing on even as the show’s foundation is built around its quick-witted sensibilities. Debauchery layered on top of debutantes and dilettantes with a splash of strong messaging. Unapologetically romantic and undeniably enjoyable.

Thanks to modern sensibilities packaged within a Regency-era frame and an unabashed appetite for satisfaction, Bridgerton is the guilty pleasure selection of the holiday season that manages to emerge from its soap opera obligations rather innocently (but don’t watch it with your parents). 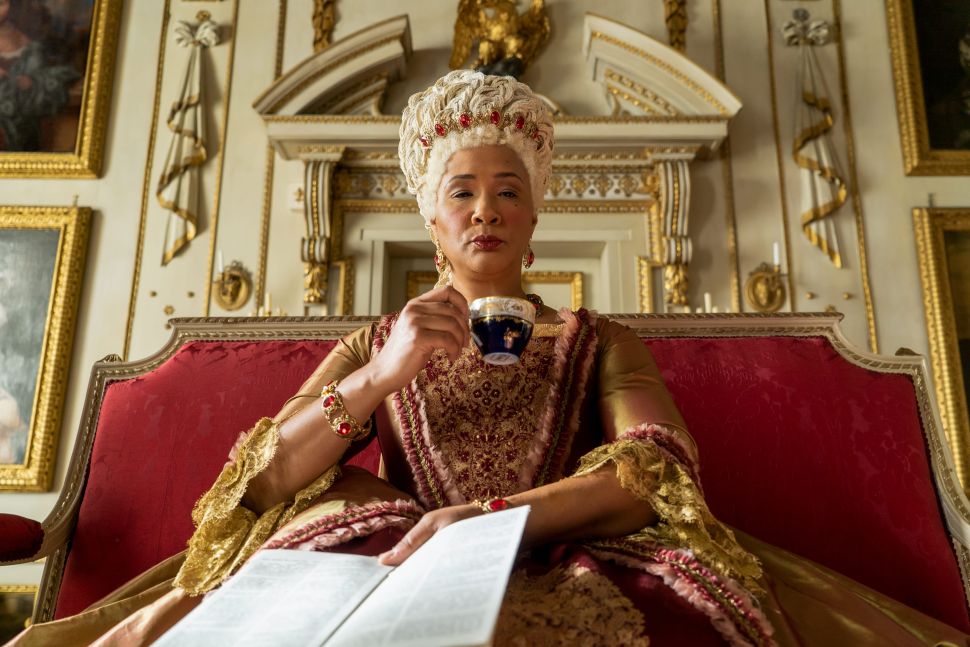