How do you celebrate Christmas after a genocide? After you’ve seen your family killed? After you’ve tried to assimilate into a new and strange society?

Whether you knew it or not, Justice League, the early-aughts animated series, actually had the balls to consider these questions in its holiday episode “Comfort and Joy,” an entry written by Paul Dini and directed by Butch Lukic. “Comfort and Joy” is one of the show’s most narratively efficient episodes—spreading Christmas cheer across three separate storylines in just half an hour, even as it tees viewers up for a brutal series finale (the “Starcrossed” three-parter).

It serves up some superheroics people familiar with DC characters or the Justice League films might recognize. The Green Lantern and Hawkgirl, who are developing a romance, get into a snowball war before hitting a bar, and the Flash teams up with an unlikely ally, the villain Ultra-Humanite, to spread good cheer. But the episode shines brightest when it tugs at the holiday heartstrings of J’onn J’onzz, a.k.a. the Martian Manhunter.

At the top of the episode, after J’onn telepathically coordinates with the Justice League to save a species from extinction, the team splits up for the holidays. J’onn tells the gang that the season holds no special meaning for him, while Superman immediately schemes to invite his friend over to his parents’ house for Christmas.

The episode never spells it out, but we need J’onn’s backstory to fully appreciate his lack of enthusiasm for Christmas. It’s not just that he’s a tall green man, and it’s not just that his telepathic mind is fundamentally wired differently. It’s that J’onn’s history is more tragic than that of any other member of the Justice League. He is the last Martian left alive after a genocide that killed his wife and two children, as established in the series premiere, “Secret Origins.” And though he is a refugee who has suffered great pain, he must modulate his appearance constantly to avoid freaking humans out.

So J’onn barely knows what to do with the kindness of the Kents when they invite him into their home. He’s stiff and awkward, confused as to what he should call his coworker when they’re off duty. He tries to pet Supergirl’s cat, Streaky, and is rebuffed. But J’onn is no Scrooge. He graciously accepts a gifted sweater at least two sizes too big for him, shape-shifting his frame to fit to its knits and purls. He enjoys the company, but he clearly feels empty inside, so he makes himself literally empty, decreasing the density of his body enough to slide his molecules through the walls and escape into town on Christmas Eve.

J’onn’s response to his many traumas has always been to make sacrifices for the greater good at the expense of his own psychological well being. First, the loss of his family drove him to the life of a freedom fighter on Mars. Then he was captured while trying to warn the Earth of the same invaders that killed off his race. Later, as the Justice League’s telepath, his job required him to open his mind to his six teammates, putting him on the front line of any potential mental attacks. His peers are all heroes who deal with their own share of traumas, but their blues ain’t like his blues, and how could they be?

We have little evidence that J’onn ever talks about his struggles, let alone that he goes to therapy. How could the totality of his issues not race through his mind as he paces the snowy streets of Smallville, shape-shifting into his nondescript human avatar, “John Jones” and peering through windows to look at cheery gatherings and listen to the thoughts of children who still believe in Santa. In a moment of levity, he snags an Oreo to keep a little girl’s belief in St. Nick going a little longer, but it does not leave his heart full. So he continues, an intangible ghost, and it snows harder.

All the while, we catch glimpses of the respective Christmas shenanigans of the Flash, who tracks down a toy for some kids, and Green Lantern and Hawkgirl, who consummate their flirtations with a bar fight. Both Dini and Lukic—veterans of telling animated, character-driven superhero stories—knew exactly what they were doing in breaking the narrative this way. The episode draws from the “Holiday Knights” format from The New Batman Adventures, and just as in that episode, one story serves as a heavy thematic anchor against the buoyant humor. Clark tries to use his X-ray vision on lead-lined wrapping paper. John and Shayera get their post-pugilistic canoodle. Wally does more than one good deed, spinning Dini-isms along the way. (“I kind of liked it when he made the poopy noise.”) And Bruce and Diana are definitely playing with her lasso in a way that would be inappropriate for kids’ TV, though they’re barely mentioned in the episode.

But J’onn’s story is the one the episode imbues with grace—in a very literal sense when he comes upon a church. He hears a recital of the Christmas carol “It Came Upon a Midnight Clear,” written by Edmund Sears, and his stoic face cracks like an icy lake in March. He has finally found something to connect to, an outlet for the intensity of his melancholy.

The episode ends at daybreak on Christmas, with the Kent house bathed in morning light and J’onn stroking Streaky and singing a Martian canto. None of the Kents know the words, but they recognize the performance as a treasure. “And he said he didn’t bring a gift,” Clark says.

J’onn is a Martian, but his hurt is universal. “Comfort and Joy” acknowledges not just the thrills that come with ripping open presents but also the pain of having no one to share them with. It understands the cognitive whiplash we can feel when we are surrounded by happiness but still desperately need to heal before it can reach us. Like the best Justice League episodes, it dares to hope that healing is possible.

A version of this piece was published at John Maher’s Tears for Toons newsletter. “Comfort and Joy” is available to stream on 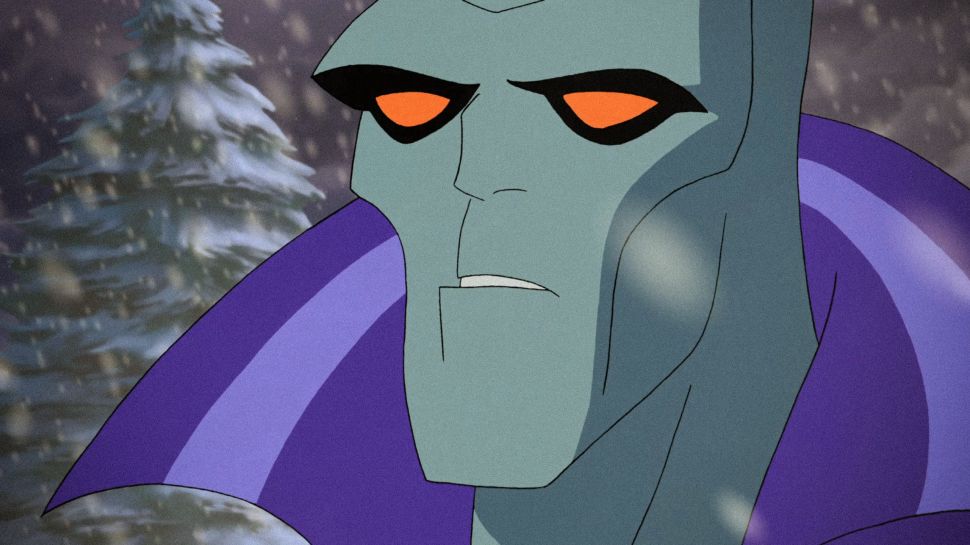