Action movies are fun empowerment fantasies. From Star Wars to Die Hard to Captain Marvel, they mostly have the same plot and the same dynamics. Your protagonist starts off on some backwards desert planet, or separated from his wife, or the confused brainwashed dupe of evil aliens. And then he or she is faced with challenges and revelations and powers up and defeats the boss bad guy and saves the universe and/or his wife and ends by earning the adulation of all. Occasionally heroes will make the ultimate sacrifice for the greater good, as in Rogue One, or Endgame. But that’s just a way to immortalize your heroes for greater glory; they’re even more awesome dead than alive. Action movies are stories designed to give you the thrill of fighting and winning, via big explosions, boss battles and the vicarious rush of personal triumph.

Or at least, that’s how they’re generally supposed to work. Crouching Tiger, Hidden Dragon, though, was a major, hugely successful, and little imitated exception. Released 20 years ago today in the United States, the film was a massive critical and commercial success. It was nominated for 10 Oscars, and made $213 million worldwide on a budget of $17 million.

Crouching Tiger was an odd action film for the American market in many ways. Directed by Ang Lee, the movie is broadly in the wuxia Chines martial arts genre, and all dialogue was in Mandarin. But the really remarkable thing about its success was that it steadfastly refused to do what action movies are supposed to do: empower viewers. Instead, it tells a melancholy story in which its protagonists make a series of bad choices, fight clearly inferior enemies, and then fail. The film ends, not with triumph, but with death, resignation and despondence.

Initially, the protagonist of Crouching Tiger, Hidden Dragon seems to be Li Mu Bai (Chow Yun-fat), an 18th century Chinese swordsman who is thinking about giving up his career and settling down with his old friend, the leader of a security company, Yu Shu Lien (Michelle Yeoh). Before Li can retire though, his sword, the Green Destiny, is stolen by a young aristocrat named Jen Yu (Zhang Ziyi). Jen it turns out is under the tutelage of Jade Fox (Cheng Pei-pei), who killed Li’s old master. Li undertakes a final mission to take revenge on Jade Fox, and to convince Jen to be his pupil.

Jade Fox is Li’s arch nemesis, but she’s not much of an adversary—the first time they fight, it’s clear that Li is the vastly superior combatant. Jen is more skilled, but she’s very young, and Li obviously outclasses her as well. The fight scenes don’t function as exhilarating demonstrations of the protagonist’s ability to overcome and win, since there’s little doubt of who is the better fighter. Instead, they’re lovely, lyrical ballets, in which the antagonists defy gravity, leaping onto rooftops, or pattering across the surface of a lake like martial arts Jesuses. The most striking sequence is a battle in the canopy of a bamboo forest, with Li and Jen lightly launching themselves from branches in a rustle of  leaves. It’s achingly beautiful—a fight scene that’s a kind of collaborative fantasia, rather than an exercise in dominance.

That vision of martial art as harmonious dance is an aspiration, but one never resolved or realized in the plot. Li wants to teach Jen, but she is reluctant, and with good reason. Jade Fox wanted to be trained in the martial arts of Wudang by Li’s old master. But Wudang is sexist and patriarchal. With great bitterness, Jade Fox says that Li’s master slept with her, but would not train her. Jen remains angry on Jade Fox’s behalf—an anger exacerbated when her parents insist she marry a businessman. She wants to become a martial arts adventurer and marry Lo (Chang Chen), a bandit lover she met in the desert when he robbed her family’s caravan.

Li doesn’t share all his old master’s prejudices; he wants to take Jen as a student despite Wudang’s rules against women. But patriarchy isn’t so easy to escape. Li’s compassion for Jen often reads as condescension, and he still wants to kill her mentor. For her part, Shu Lien tries to protect Jen, and obviously sees herself in the young woman. But Shu Lien also keeps telling Jen to obey her parents and go through with her marriage, which Jen quite reasonably resents.

The real antagonist in the movie, then, isn’t any supervillain boss. It’s a history of injustice and sexism, which comes between Li and Jen like a black sword. Defeating Jade Fox isn’t that difficult, but the poison that destroyed her life is harder to stop with a punch, no matter how well placed.

In the end, that poison corrodes Li, too. One of Jade Fox’s dart finds his neck by luck, and he dies basically by accident, for no purpose, a victim of his master’s ambivalent legacy. Jen, shaken with remorse, goes to Wudang to meet Lo. The last scene of the film shows her jumping off a mountain which supposedly will grant her a wish. She floats through the sky, calm, towards a new future, or death, or perhaps both.

It’s clear why this approach toward action filmmaking hasn’t caught on. Big budget action audiences want to feel pumped up when they leave the theater; if you want to be sad or depressed you go to a different kind of movie. And I wouldn’t want every action movie to be Crouching Tiger, Hidden Dragon either. But in the middle of a particularly difficult year, at a time when stories about the triumph of virtue seem especially presumptuous, it’s worth returning to a less optimistic narrative. For Ang Lee, we make our enemies ourselves, out of prejudice and hate. Then we, and our children, have to live with the consequences, or die with them. That’s not empowering, really. But sometimes you need truth before you can get to power. 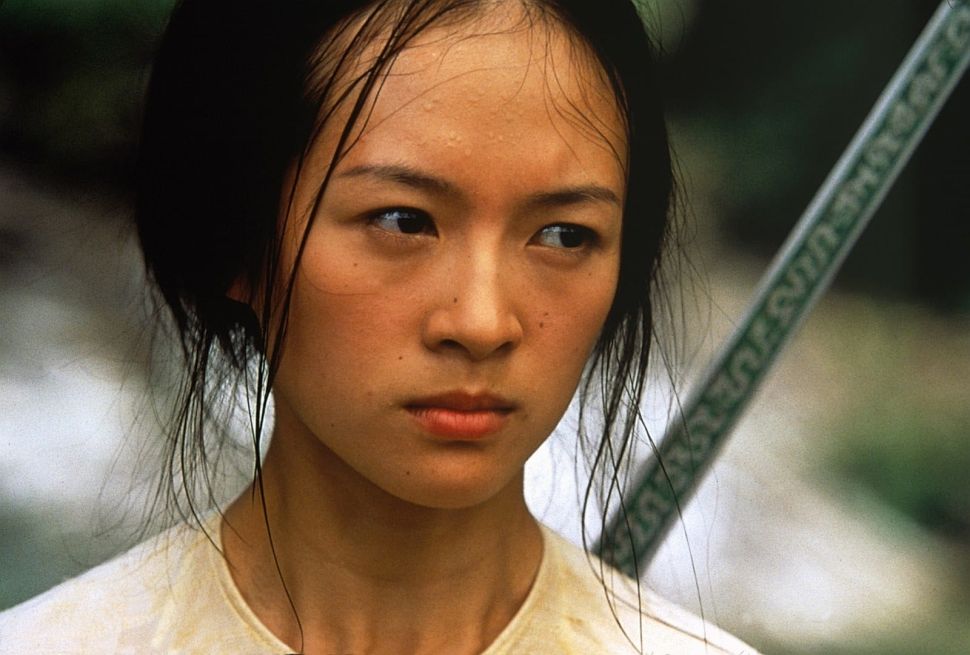