For much of the past year, Elon Musk’s tunnel startup, the Boring Company, has been building an experimental people mover system in Las Vegas under the city’s main convention center, the LVCC. As the project nears completion, the company is seeking approval to expand the “loop tunnel” to cover the entirety of Sin City.

A pair of land use proposals submitted to Clark County revealed that Boring’s new plan includes two routes on and around the Las Vegas Strip. One route would transport people to dozens of casino hotels on the Strip, Allegiant Stadium, McCarran International Airport and downtown Las Vegas. The other line would connect every Caesars-owned resort in the city, including Caesars Palace, Paris Las Vegas, the LINQ, Bally’s, The Cromwell, Harrah’s and Planet Hollywood Resort.

The filings were first reported by the Las Vegas Review-Journal.

These proposals were submitted just a week after the Las Vegas Convention and Visitors Authority (LVCVA) completed the acquisition of the Las Vegas Monorail, which filed for bankruptcy in September.

The buyout effectively killed a noncompete agreement that had prohibited Boring from digging tunnels in areas serviced by the Monorail. The Monorail has remained shut since March due to the coronavirus pandemic and is not expected to reopen until at least May 2021.

On Wednesday, the Boring Company will present its proposal before the Las Vegas City Council. County officials will hear the company present in February.

See Also: Why Elon Musk And Other Tech Billionaires Are Leaving Silicon Valley For Texas

According to Boring’s proposal, the final loop system will be able to shuttle up to 4,000 passengers per hour in self-driving Tesla cars, as well as a tram built on the Model 3 platform that can fit between 12 and 16 people, between any two destinations in Las Vegas within minutes. Initial operation will likely have safety drivers on board, LVCVA CEO Steve Hill told The Verge in May. The vehicles will gradually evolve to following a “conduit” and sensors that are being laid in the tunnels.

The first phase of Boring loop under LVCC was originally set to begin operation in January 2021 to service attendants of the Consumer Electronics Show (CES)—for free. The LVCVA had paid Boring $52.5 million to build the tunnels. But since next year’s CES will go virtual, the city considers the investment a sunk cost now.

The newly proposed citywide loop, however, will be funded differently. The Boring Company will pay for the cost of constructing the main tunnel, according to a LVCVA presentation in November. Casinos and properties along the route that want a station will have to pay for the construction themselves. 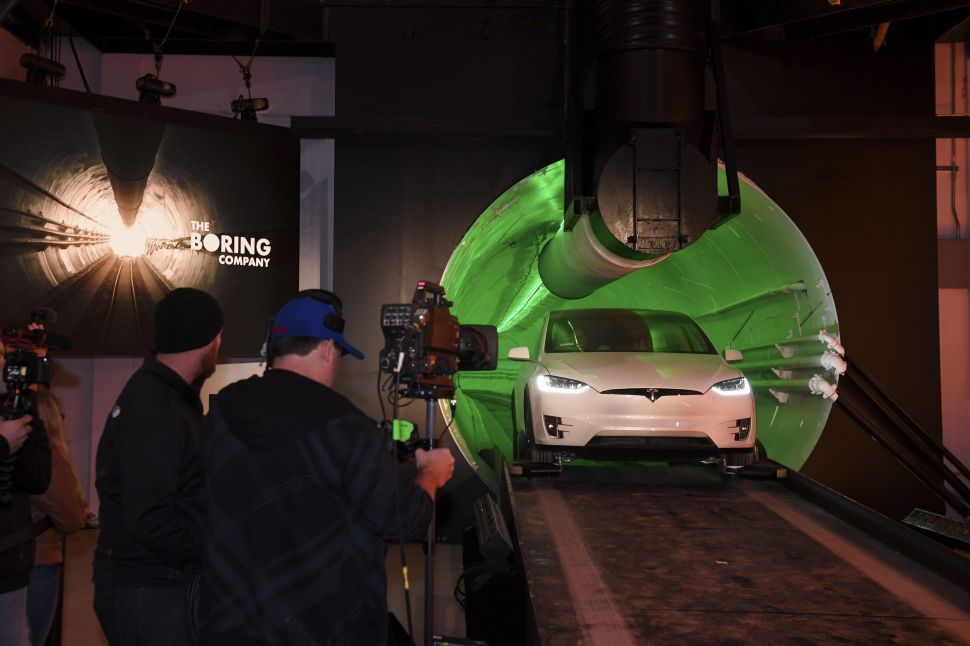