But what is an Internet Boyfriend? According to culture writer Esther Zuckerman, who wrote the book A Field Guide to Internet Boyfriends: Meme-Worthy Celebrity Crushes From A to Z, it’s more than simply a celebrity crush. It’s also more than just someone the entire internet loves, although that is, of course, a requirement. Rather, she tells Observer, it is someone who “projects an image of being good and kind.” He (or she, since there are Internet Girlfriends as well) is unproblematic, getting almost exclusively good press.

When real men disappoint us, our Internet Boyfriends will always be here for us to prove what men could and should be like: beautiful, kind, authentic. What started with Benedict Cumberbatch slowly transformed into Tom Hiddleston, Idris Elba to Ryan Gosling. As Zuckerman explains, Internet Boyfriends are not sexist, racist or ageist. There is “a little bit of someone for everyone” in her book, While tough cuts, of course, had to have been made, such as Tom Hardy and David Dobrik, Zuckerman made sure that “there was a range of types of people,” making Internet Boyfriends a diverse cultural phenomenon that anyone could relate to.

There have been dozens, if not hundreds, of Internet Boyfriends in our lifetimes, but today we are going to be taking a look at only a few of the most influential, dreamy ones from Zuckerman’s book.

Timothée Chalamet might be one of the best known Internet Boyfriends of this decade, at least to young girls who swoon over his floppy hair and vulnerability. He first graced our screens in 2017 with the film Call Me By Your Name, where he embodied the awkwardness and infatuation of teenage love, and continued to be just as lovable in the highly acclaimed Lady Bird and Little Women.

Zuckerman’s Assessment: “In a way, most Internet Boyfriends have a little soft boy to them. Soft boys project vulnerability in a way that makes them seem both admirable and approachable. They are sort of floppy in countenance—and sometimes a little squirrely in body language. They seem unthreatening and ultimately kind. And if they have a king, it is Timothée Chalamet.”

Anyone who has Netflix has surely seen Noah Centineo’s face. Being the newest teenage heartthrob in rom-com movies such as To All the Boys I’ve Loved Before, Sierra Burgess is a Loser and The Perfect Date, Centineo exudes sensitivity and romance all while being in a buff, jock body.

Zuckerman’s Assessment: “When To All the Boys dropped in the summer of 2018, the reaction to Centineo was instant. He was the subject of glowing profiles like the one in New York Magazine in which he confessed: ‘I’m fucking so romantic.’… Instead of being standoffish about his affections—the way so many men are perceived to be—he’s overwhelmingly, gushingly open about his desire for romance.”

It all started with a meme. “Hey Girl” used Gosling’s face along with a caption that made it seem as if he was already your boyfriend (ex: Hey Girl, I can’t wait to meet your parents and all of your friends.) As time went on, he found himself as the main love interest in The Notebook, becoming a symbol of what every girl wants in a boyfriend.

Zuckerman’s Assessment: “The Nicholas Sparks adaptation established him as the sex symbol of the early aughts, an excellent movie kisser, and the guy with whom you want to be stuck out on a boat in the rain.”

A personal favorite for Zuckerman, Isaac is a dream. He sings. He dances. He eats Hot Cheetos with chopsticks while wearing a beanie. But more than all that, his dreamy portrayal of Poe Dameron in the new Star Wars trilogy made every Star Wars fangirl want to be with him.

Zuckerman’s Assessment: “I always say, Oscar Isaac, that’s the one I knew I had to include because he is my biggest Internet Boyfriend crush, so writing that was really easy for me.”

Dwayne Johnson is one of the only men on this list who was not supposed to be an Internet Boyfriend. Before his roles in The Mummy Returns, The Scorpion King and, most notably, the Fast and Furious franchise, he was a professional wrestler that was the villain, the one you rooted against. It seems impossible to imagine since, now, you will never see him without his award-winning smile.

Zuckerman’s Assessment: “Dwayne Johnson emerged from being a goofy villain in one of the most over-the-top corners of American entertainment into being everyone’s favorite movie star, the dude you want to root for even if you are well aware that there’s a high probability that his latest big-budget flick is kind of crappy. Johnson is the type of celebrity that could float the idea of a presidential run, and get a reaction like, ‘Well, that’s kind of a funny joke, but you know, he also might actually unite the country, bringing us all together within the hug of his massive wingspan.’”

Not only is Michael Jordan an extremely accomplished actor and a global superstar, having performed roles in The Wire, Friday Night Lights, the revival of Rocky, Creed and, of course, Black Panther, he is also a huge advocate for the BLM movement. He promotes diversity in his company and supports projects that make the world a better place, making him the ultimate Internet Boyfriend.

Zuckerman’s Assessment: “He just seems like the type of guy that would charm the pants off your folks, while cracking a dirty joke just out of their earshot just to amuse you.”

Robert Pattinson was every girl’s dream for the perfect boyfriend: broody, sensitive and a vampire. His role in the Twilight series, as well as his most recent role as Batman, enthralls viewers with his inhuman portrayals. He aims to entertain, whether that be through his movies or just his viral moments, which makes him a great Internet Boyfriend.

Zuckerman’s Assessment: “There is something pure about Pattinson’s antics. Whereas with other people his behavior might read as insolence, with Pattinson it comes off as weirdly endearing because there’s a playfulness to it all. He seems both deadly serious while at the same time inviting us in on the joke. He’s a little rascal whose hair you would just like to tousle.”

While Robert Pattinson was the Internet’s quirky boyfriend, Kristen Stewart quickly became the ultimate Internet Girlfriend. During Twilight, she was awkward and anxious and bore the brunt of mockery from the Internet. Things changed for her soon after, though; she became beautifully, unapologetically and uniquely herself, becoming a queer icon.

Zuckerman’s Assessment: “Kristen Stewart never deserved the scorn she got. Even during the Twilight years her commitment and fundamental coolness were always there. The rest of the world just had to catch up. These days it’s thrilling to see Stewart being loved for exactly who she is.”

Probably the most controversial person on this list, Cardi B is definitely a force to be reckoned with. She is funny. She is opinionated. Coming from the Bronx as a stripper, she has not taken a traditional trajectory to fame, but she makes a great Internet Girlfriend for those who see inspiration in her,

Zuckerman’s Assessment: “Is there anything better than just listening to Cardi B talk? Something about hearing her go on about whatever is somehow the most wonderful feeling in the world. It’s like taking a shot of tequila, straight no chaser. You get the rush and then are overcome by an inexplicable calm.”

A Field Guide to Internet Boyfriends: Meme-Worthy Celebrity Crushes From A to Z is available for purchase from Running Press. 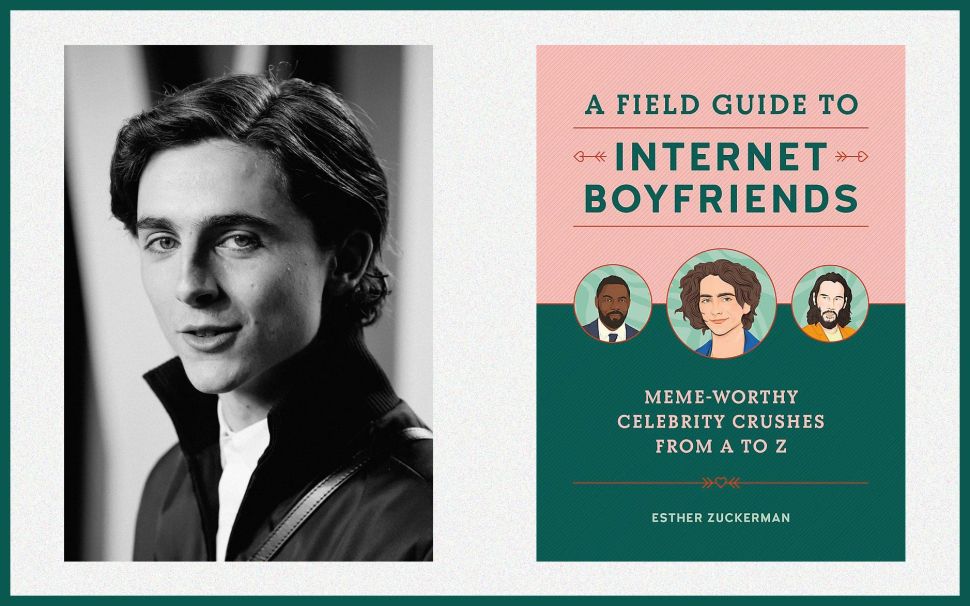