Welcome to the future, where food growing in zero-gravity space is no longer science fiction.

This week, NASA astronauts harvested a fresh crop of radishes from a mini-lab on the International Space Station. NASA flight engineer Kate Rubins pulled out 20 radish plants from the Advanced Plant Habitat (APH) and wrapped each of them in foil for cold storage. They will be shipped back to Earth next year for further study.

The experiment, officially called Plant Habitat-02, is the first time NASA has grown radishes on the ISS. But the space agency has successfully grown many other types of produce in the orbiting lab in the past.

The APH, where the radishes were grown, is developed by NASA and Madison, Wisconsin-based Orbital Technologies Corp. The system was launched in April 2017 and installed on a rack in the ISS’ Japanese Experiment Module Kibo. A year later, a small batch of dwarf wheat and Arabidopsis, a type of flowering rockcress, were harvested in the enclosed chamber.

The APH uses LED lights to mimic sunlight and contains more than 180 sensors that relay real-time information, such as temperature, oxygen content and moisture levels, back to a managing team at NASA’s Kennedy Space Center in Florida.

NASA selected radishes for the latest experiment because they are genetically similar to Arabidopsis and have a short maturity cycle of just 27 days.

“Radishes are a different kind of crop compared to leafy greens that astronauts previously grew on the space station, or dwarf wheat which was the first crop grown in the APH,” explained Nicole Dufour, NASA’s APH program manager at Kennedy Space Center. “Growing a range of crops helps us determine which plants thrive in microgravity and offer the best variety and nutritional balance for astronauts on long-duration missions.”

Other than the APH, there are two less sophisticated plant growth systems on the ISS called “Veggie” units, also built by Orbitec. Those two units have produced a variety of vegetables since 2014, including red and green romaine lettuce, Chinese cabbage, mustard and Russian kale.

Elsewhere on the ISS, scientists have also had success growing meat—real flesh, not Beyond Meat.

Last year, a multinational collaboration led by Israeli startup Aleph Farm produced the first-ever “space beef steak” on the ISS. Using bovine cells harvested on Earth, scientists grew them into small-scale muscle tissue with the help of a 3D bioprinter under microgravity conditions.

Since the first human established residency on the ISS in 2000, all astronauts have largely relied on packaged food regularly launched from Earth. However, since packaged diet gradually loses vitamins and nutritional value over time, it doesn’t suit future deep space missions to the Moon, Mars and beyond. 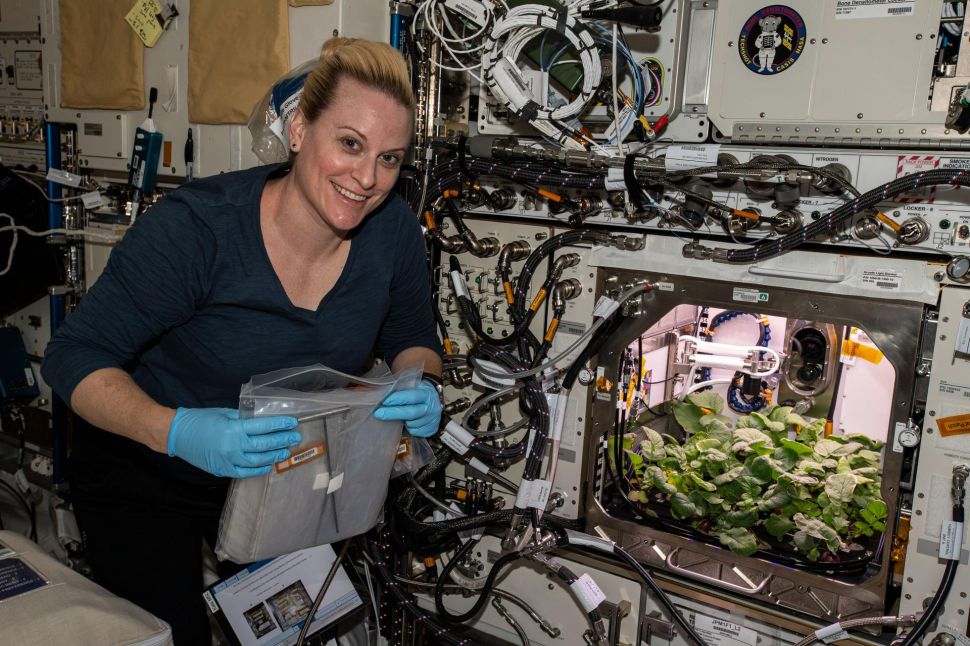