The worst year in movie history came to an end with neither a bang nor a whimper, but with a head-scratching “Duh?” With the presence of larky, luminous Michelle Pfeiffer in French Exit, hope sprang eternal. Unfortunately, the dismal film turned out to be a load of pretentious, incomprehensible twaddle. A few people desperate for even a few minutes of the kind of cinema you could call rational claimed they stayed awake, but discerning movie lovers on speaking terms with coherence ran in the opposite direction.

Having squandered her husband’s fortune, Frances (Ms. Pfeiffer, sacrificing her signature blonde silk for hair the color of the red mud in the La Brea Tar Pits) is a miserable New York socialite left penniless after the money runs out.

Forced to sell her books, jewels, paintings and lavish penthouse, she drags her son Malcolm out of school and scrapes enough money together to move to Paris. Penury doesn’t usually finance trips to Paris, but in a film composed of bizarre, nonsensical episodes, Frances gives her last $20 to a panhandler in Central Park, then insults the cop who comes to rescue her from possible mutilation in the hands of the homeless. Nothing she does makes any sense. She’s illogical, irresponsible and impulsive, and Malcolm (played by a wasted Lucas Hedges in his first mistaken movie misfire) is no less pragmatic, deserting his girlfriend and his education to substitute the Left Bank for the East Side.

On the ship, Malcolm sleeps with a fortune teller who gets thrown into the brig for predicting the deaths of a number of fellow passengers. In Paris, they mosey the streets and dine in the best Michelin restaurants. When a surly waiter ignores their request for the bill, Frances sets fire to the flower arrangements. An American expatriate invites them for a cassoulet, and they find a frozen dildo in the freezer. These isolated incidents contribute nothing to the narrative because there is no plot to begin with. The film has no center. In fact, it has no ending, either.

Everything leads up to a vague attempt to introduce a limp resemblance of a plot about the disappearance of their black cat, which Frances tolerates because she believes it houses the spirit of her dead husband. When the cats runs away, they enlist the help of the fortune teller from the ship to bring it back. An awkward seance follows with Tracy Letts as the voice of the cat, speaking stupefying dialogue like “I’m a cat and I’ve got worms and fleas and, you know, I’m not much concerned with anything except the facts of my truly horrible, fucking existence.” Poor Ms. Pfeiffer has her unlucky share of contemptible lines, too: “I find the whole idea of suicide so contemptuous… It’s such a cliché.… My whole life is riddled with cliches. You know what a cliché is? It’s a story so fine and so thrilling that it’s grown old in its hopeful re-telling.” Huh?

Nothing about French Exit makes any sense. The plodding script by Patrick DeWitt and deadly direction by Azazel Jacobs compete in the field of maximum incompetence in a film that is sort of a cross between first-semester screenwriting and a meandering architectural travelogue as Frances walks the streets admiring the real estate, chain-smoking, and giving away her fortune to park-bench vagrants and other assorted freaks and wackos. The friends I saw it with laughed themselves silly until the final shot, in which the black cat follows Frances down a dark street in the middle of the night. So we all reluctantly surmised maybe it was indeed a film about a woman who does at last commit suicide, accompanied by so many shots of uneaten meals that the end credits include a “culinary stylist.”

It’s good to see Michelle Pfeiffer in movies, but not in this one. 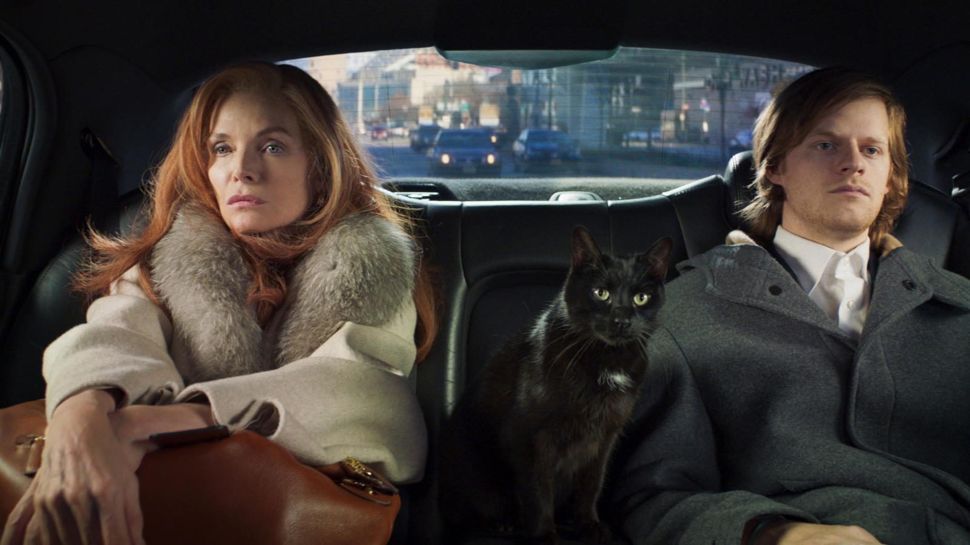