It’s been more than a year now since I’ve heard live opera in the theater (Wozzeck at the Met) and in that time I have become frankly burnt out by opera on video. I miss the enveloping audience, the visceral sensation of the voices, the camaraderie of the activity I like to call “hobnobbing with my fellow wizards” —which in real life means gossiping during the intermissions with other critics and fans of opera.

Most of all I miss the sensation—another term I’ve unwittingly coined—called the “grand opera buzz.” It’s that sense of elation and wonder an overwhelmingly great opera performance evokes, or, to put it another way, it’s getting high on opera. That sensation mostly requires something on the order of the clobbering impact of, say, Anna Netrebko at her fiery, opulent best.

That kind of wave of ecstasy is difficult to encounter in your living room, but, as I found this weekend, not impossible. A streaming video of Offenbach’s opera Les Contes d’Hoffmann from Berlin’s Komische Oper boasts soaring imagination and go-for-broke performances more than sufficient to get that long-absent buzz tingling.

To frame this fantastic tale of the poet Hoffmann’s horrifically unsuccessful search for love, director Barrie Kosky uses a short story by the real-life writer E.T.A. Hoffmann. The character of Hoffmann is split among three artists, the first of which, actor Uwe Schönbeck, represents the poet at the end of his life. (His part consists mostly of reciting passages from the short story mentioned above.)

Less persuasive perhaps is the dividing of Hoffmann’s music between two singers. The baritone Dominik Köninger, handsome as a male model and grippingly connected to the drama, plays the “younger” Hoffmann of the prologue and first act, and he is predictably effective and touching. (I say “predictably” because he’s had big successes in a wide variety of works at the Oper, including Pelléas et Mélisande and The Pearls of Cleopatra.)

After intermission, the role of Hoffmann is handed over to the tenor Edgaras Montvidas, who not only has the easy top for this quiet role, but also the temperament to sing convincingly while acting out a scene of rough sex, on top of a coffin yet. Like Köninger, he’s an excellent artist, bnnut I thought the character of Hoffmann felt unnecessarily fragmented, and even a bit lost in the shuffle.

That “shuffle” was in large part a function of the protean talent of soprano Nicole Chevalier, who dazzles in four roles, Hoffman’s three past loves and his current interest, the opera diva Stella. She does not have a particularly glamorous voice, and here and there the tone gets wiry. But she is every inch a singing actress, so versatile and so committed she seemed to consign the rest of the cast to the shadows.

Most impressively, she inhabits each persona with completely different energy and body english in her contrasting roles. I thought my favorite was going to be her Olympia, a singing robot who is here presented as a collection of disconnected body parts in a storage cabinet—especially when she interpolates into her song vocal sound effects of a rewinding cassette tape. But then she bowled me over with her carnal, driven courtesan Giulietta, pure lust and not an iota of romance.

Perhaps Chevalier’s bravura performance is why bass Dimitry Ivashchenko, despite having all kinds of interesting things to do (eating human eyeballs and literally playing the character of Antonia like a violin) never quite seems to come into focus. Also, the musical edition for this production omits the extremely grateful (though, alas, spurious) bass aria “Scintille, diamant.”

A particularly adept musical choice here was doubling the role of Nicklausse, symbol of the positive aspect of Hoffmann’s creativity, with the ghost of Antonia’s mother, who represents the destructive side of artistic inspiration. In these parts, mezzo Karolina Gumos not only vocalizes handsomely, she conjures sufficient gravitas for the unorthodox finale of the work, a spooky repurposing of a duet from Don Giovanni.

In this magnificent ensemble effort, the real star is director Barrie Kosky, who deserves the loudest (virtual) bravo for both the intellectually elegant concept and the meticulously detailed execution. Even moments that didn’t make immediate logical sense—for instance, putting the male students in the prologue in identical strapless bouffant evening gowns—have the overpowering emotional logic of a lucid dream. This Hoffmann succeeds in what would seem the impossible task of being both fantastical and heartbreaking.

This production may be watched free for the next month on the Operavision streaming site, where you can also access another superb Komische Oper performance, Massenet’s Cendrillon. 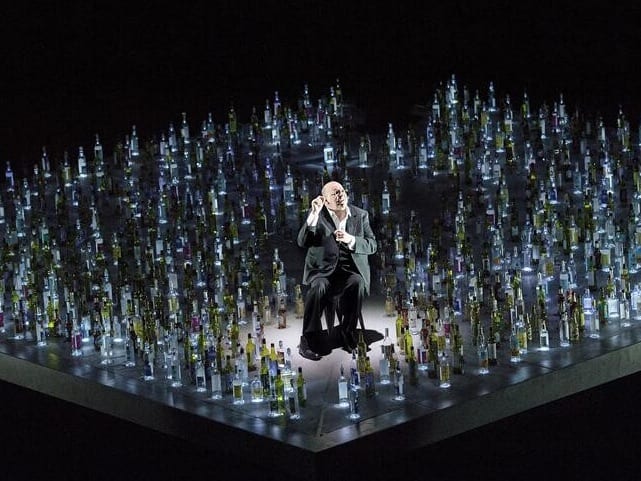