It was in the spring of 2018 when five-time Tony Award-winning director George C. Wolfe was working on a Broadway revival of Eugene O’Neill’s The Iceman Cometh with Academy Award winner Denzel Washington leading as Theodore “Hickey” Hickman. During the acclaimed tragedy’s 14-week run, Wolfe and Washington began to discuss the prospect of working together again on the screen adaptation of Ma Rainey’s Black Bottom, the second play in August Wilson’s legendary Pittsburgh Cycle, a series of 10 plays—each chronicling African American life in a different decade of the 20th century.

A powerful exploration into the struggles of the African American experience in the 1920s, Ma Rainey’s Black Bottom, which premieres on Netflix today, follows a tense afternoon recording session in Chicago with the fearless “Mother of the Blues,” Ma Rainey (Viola Davis), and her band of musicians. Late to her own session, Ma engages in a battle of wills with her white management team over the control of her music, which differs from the sounds of the Harlem Renaissance. Meanwhile, as the band waits in the studio’s cramped rehearsal room, ambitious cornet player Levee (the late Chadwick Boseman), who is determined to stake his claim on the growing music industry, pushes his bandmates to tell deeply personal stories that will forever change the course of their lives.

A decade after Wilson’s passing, Constanza Romero, the late playwright’s widow and the executor of his estate, approached Washington to ask if he would be interested in bringing Wilson’s 10 iconic plays from the stage to the screen. In 2016, Washington directed and starred alongside Davis in the adaptation of Wilson’s Fences, the story of a Black couple in 1950s Pittsburgh that won Davis her first Academy Award for Best Supporting Actress. With the intention of showcasing Wilson’s most prominent plays first, the logical next choice was Ma Rainey’s Black Bottom, this time with Wolfe at the helm and Washington as a producer.

In an interview with Observer, Wolfe opens up about the process of adapting one of Wilson’s most renowned plays, the enduring lessons of the Great Migration that can still be applied in the year 2020, and the memories that he will cherish the most from his time of working with Boseman in his final role.

Observer: August Wilson’s widow, Constanza Romero, revealed that you had sent a letter to August after the opening of his Broadway plays, Seven Guitars and Two Trains Running, in the 1990s, to express your interest in one day becoming involved in one of his productions.
George C. Wolfe: I did?! (Laughs.)

Apparently, you did!
Wow, I don’t even remember writing that, so there you go, there you have it.

How did the decision to direct Ma Rainey’s Black Bottom come about? What was it about Ma Rainey in particular that made you want to take on such a formidable task?
Denzel and I, we were talking about this theater project, and then he mentioned to me that he wanted me to direct Ma Rainey as a film, so that’s how that happened. And so when I started working on the script with [acclaimed actor, director and screenwriter] Ruben Santiago-Hudson, I just started digging in so I could find the material, then find myself inside of the material.

I think Levee is America. Levee is a person of extreme talent and possibilities, who is also traumatized by what happened in the past, and the question is: “Is the trauma of the past gonna overcome the future?”

I was drawn toward all of the characters. All of the characters are amazing to me, but I was really drawn toward Ma and her unapologetic strength and the power that she has to take charge and demand that people respect her the way she expects to be respected, and so that I found very compelling and very strong. Then, I was moved and deeply affected by Levee’s belief in his talent and belief in his future and possibilities. I was also deeply affected by how haunted he was by things that happened to him when he was very young and what he witnessed.

And then each of the other characters for various, different reasons. Sylvester, I was drawn to [because] I stuttered when I was little and I was very attached to that part of him and I wanted to find a wonderful actor who understood the dynamic of what that would be, and I found it in Dusan [Brown]. It was just exciting for me to just dig in and try to see how much I could find that was embedded in the work and embedded within myself.

What were some of the biggest challenges that you faced as a director when bringing this work from the stage to the screen? How did you manage to find your own voice within the project while also staying true to the original spirit of the play?
Well, I didn’t think about it being on the stage because I had no relationship to it on the stage, other than the fact that I’d seen it. But this was 1984, so it was 9,000 years ago. (Laughs.) I remember aspects of it but the memory of the piece wasn’t embedded in my soul. Therefore, I felt a freedom to discover and find it.

There were challenges involved in how gloriously wonderful but also intense the language is, but then we had a two-week rehearsal period where the actors got to play around and live inside of the language. They were all so incredibly skilled, so I knew that really wasn’t going to be a big issue. And then came just opening myself up to allow myself to have things come to me, images that I wanted to play with.

I think one of the most important times when you’re working on a project is the time that you spend not knowing because in the time that you spend not knowing, that’s when other parts of your brain and your being are working and solving problems while simultaneously digging in and doing the research. So, it’s a double-edged process of figuring out what’s really going on historically in that period of time and making yourself available to ideas and impulses that might reveal themselves while you’re learning all the factual information.

Ma Rainey might be set in Chicago in 1927, but in many ways, it is an honest reflection of the America that we live in today. After the year of reckoning that we’ve had, what do you think has to be done for the nation to come to terms with its complicated past?
It’s very interesting because any time anything traumatic or intense happens, [such as] 9/11, people go, “Okay, and now we heal.” How are you gonna heal until you’ve gone inside of the pain and the loss? There’s this impulse in this time period where the technology is so quick [and] we expect our beings to work just as quickly, but that isn’t how it works. So, until you dig inside and make yourself available and allow yourself to confront what you don’t know, only then can you begin to heal, only then can you begin to get in touch with some of the dynamics that are in play. If you rush to come up with the healing, you really haven’t gone on the journey.

So, it’s a complicated question because I think Levee is America. Levee is a person of extreme talent and possibilities, who is also traumatized by what happened in the past, and the question is: “Is the trauma of the past gonna overcome the future?”

In an industry with so many incredible Black actresses, what was it about Viola Davis that stood out to you both personally and professionally when casting the main role?
Well, I think Viola is brilliantly skilled. I think she is ferociously smart, and she has an emotional reservoir as an actor that is stunning. She’s a strikingly awesome-looking human being, but she is void of vanity. She will surrender vanity for her art. I knew that she would inhabit all the complicated crevices that Ma Rainey has, which is not to say that other actresses wouldn’t, but it was a combination of qualities that made her, for Denzel and myself, absolutely perfect for this role.

What are some of your fondest memories of working with Chadwick in his final film? As a director that has an extremely unique and rare understanding of what goes into a production, what do you think will be Chadwick’s legacy both on and off the screen?
Well, I don’t know if I can speak to the legacy—that’s [established] over time—but I think when you look at the number of film performances that he has, culminating in Ma Rainey, the range is extraordinary. He’s clearly an actor of extraordinary charisma and profound emotional depth and incredibly skilled. Working with him, working with the entire cast, it was an unbelievable joy.

Every single step of the way, there was a joy because the entire cast was very hard-working, very generous, and just dug in. There was a no-nonsense energy about the entire company. “Let’s dig in, let’s do the work, let’s leave it all on the floor. Let’s leave the truth, the guts, the rawness. Let’s not protect or pretend anything. Let’s go for it.” And they all did, and they supported each other, and they were playful with each other and laughed together. So, the process of filming was an incredibly joyful one. The whole process has been quite joyful.

Knowing what you know now about how sick Chadwick was during the production of this movie, did your subsequent viewings of the film feel any different?
No, because when I heard of his passing, I was just in a state of shock and sadness, and it wasn’t about revisiting [the past]. But every single thing that I feel about his work in the film, it’s a source of tremendous pride for me and a huge blessing because I, like the rest of the company, was working with a great artist. And that’s my memory—that’s what I’m holding on to. I’m holding on to the fact that we talked about working again together, and he sent me a script and I sent him a script and we talked about doing a play. So, the sadness that I feel is very deep and real, but on the other side of that is the pride and joy of his work. 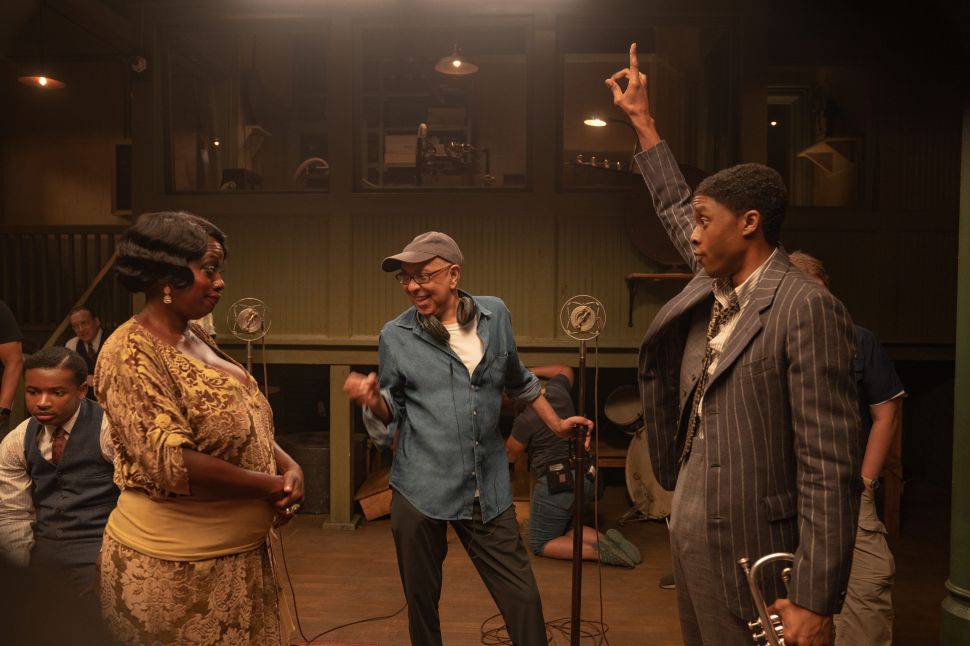