Does a rom-com have to have a happy ending?

Probably for most rom-com fans the answer is some combination of “duh” and “what are you smoking?” People turn on a rom-com so they can see pretty, appealing actors fall in love and live happily ever after. It’s a genre that’s supposed to be fun and uplifting. You don’t want the couple in a rom-com to die horribly in the last act. You don’t want them to tearfully break up. That’s for drama, or tragic romance. Romantic comedies are supposed to be romantic, and also comedies. Everything goes right. Nothing goes wrong. There is a happy ending!

And as you’d expect, romantic comedies tend to be judged on whether or not they make their viewers happy. When people adore the new Kristen Stewart lesbian Christmas rom-com about coming out, Happiest Season, they adore it because Abby (Stewart) and Harper (Mackenzie Davis) triumph over repressed WASP homophobic parents and Christmas heteronormativity to reach that last kiss. More, their love sprinkles pixie dust everywhere, so even those terrible parents end up smiling and cool with lesbian love.

In contrast, the smaller number of people who don’t like the film largely don’t seem to like it because the happy ending doesn’t convince them. Its critics don’t believe that Abby and Harper would be happy together.

Per director Clea Duvall’s script, Harper invites Abby home to her family holiday. Abby accepts…and then Harper tells her that she lied when she said her parents were excited about their relationship. Instead, it turns out, her parents think their daughter is straight. She wants Abby to pretend to be her also-straight roommate. “That, of course, is the moment when a real person would say, ‘I’m not going back into the closet or to your family Christmas. Also, we are through,'” the Star Tribune critic Chris Hewitt writes in disgust.

It only gets worse from there. We never see flashbacks showing why Abby likes Harper in the first place, so there’s no cushion of goodwill as Harper reveals herself to be a neurotic control freak so terrified that her parents will discover she’s gay that she actually repudiates Abby in public, just like she repudiated and traumatized her first girlfriend Riley (Aubrey Plaza). Or, as one Twitter user put it, speaking for many: “I’m halfway through Happiest Season and we’re hoping for them to break up, right????”

All rom-coms place barriers in the way of love. Overcoming those barriers is supposed to make the final triumph of romance feel more exhilarating, more earned, more ecstatic. But in this case, the barriers feel more real than the overcoming.

Harper and her family are a nightmare any significant other would want to avoid. Harper and her sister Sloane (Alison Brie) physically attack each other multiple times as they rabidly vie for withheld parental love. Mom Tipper (Mary Steenburgen) sprays passive-aggressive judginess about her like a tightly wrapped fire hose. Patriarch Ted (Victor Garber) is running for mayor on some sort of hideous conservative family values ticket. Run, Abby! Run! Date Riley! You two have much better chemistry!

Abby doesn’t run, though. Nor is there any KPlaza slash, despite the pleas from many a fan. Instead, the tropes leading her to marriage and happily-ever-after become a death march.

That’s not exactly the intent of the movie, but it does have a certain bleak, righteous power. Abby’s delightfully cynical friend John (Dan Levy) warns her away from the deadening heteronormativity of marriage and Christmas gatherings. And it turns out he’s right. The movie purports to be about how gay couples can take joy in the power of Christmas, too. But it could also be seen as a grim parable about how even lesbians can be swamped in the drear, dire pull of domesticated normalcy. In the Christmas war, bland conservative WASPS will swallow us all in their joyless Santa maws.

As an atheist Jew, I feel Abby’s nausea. Love and the holidays aren’t always sweetness and light, after all. Dating and family are a source of at least intermittent agony and despair for many.

There’s a place for art or movies which capture those less cheerful emotions: Brokeback Mountain, A Star Is Born, Midsommar. Even It’s a Wonderful Life—name-checked in Happiest Season—is arguably more convincing in its frightening scenes of capitalism triumphant and Jimmy Stewart in mental anguish than in its reparative insistence that everything will be alright in the end.

If horror and drama can be about grief, misery, and creeping terror, though, why not rom-coms? The 2011 Bridesmaids, for example, doesn’t provide Kristin Wiig with a very convincing significant other; it’s almost impossible to even remember what the bland cop looks like. But the movie is chillingly effective at chronicling despair. Before the first frame, Wiig’s Annie has lost her fiancé and her beloved bakery business. And then things get worse, as her best friend is pulled away, and she faces a spectacularly awful and emotionally arid future. Released after the 2008-2009 financial crisis, the rom-com promise of happy endings is fulfilled in Bridesmaids almost as a taunt. You want a happy ending? Fine. Here. Believe it if you can.

Like Bridesmaids, Happiest Season conveys conviction most effectively in its ugliest moments. I don’t really buy Tipper would call Abby in to be part of the family photo. But I absolutely buy the earlier scene where she asks Abby to take the picture, then viciously rejects all of the photos as too blurry or poorly framed and dismisses Abby with an impatient and disgusted wave. The love and forgiveness are ersatz. But the coldness, the selfishness, the betrayal and the quiet, searing erosion of self-respect—those are all holiday emotions that land as surely as a tree falling in a living room, scattering ornaments.

I wouldn’t want every rom-com, or every film, to be miserable. But a lot of families are in fact intolerant and awful, and conservative normality is a trap and a weapon. Happiest Season gets that right, and it’s something of a relief to see it. Abby should race screaming into the street, and never see Harper or her miserable family again. This rom-com doesn’t give us that happy ending, or that happy season. In the middle of one of the unhappiest years many of us have ever experienced, I appreciate the honesty. 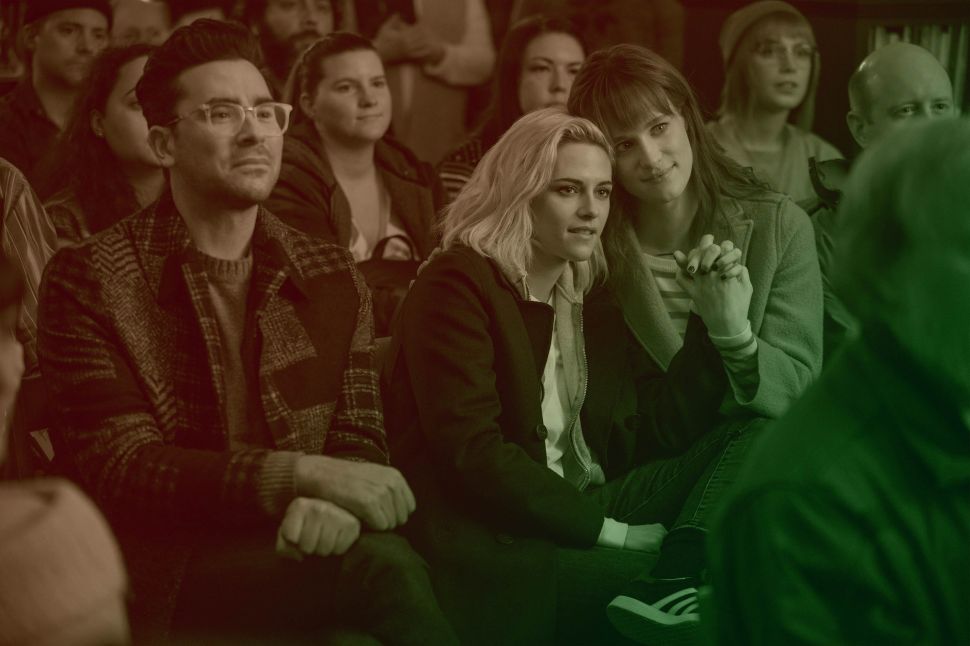