On Thursday, the Warner Bros. Picture Group announced that it has committed to releasing its 2021 film slate via a unique, consumer-focused distribution model in which Warner Bros. will continue to exhibit the films theatrically worldwide, while adding an exclusive one month access period on the HBO Max streaming platform in the U.S. concurrent with the film’s domestic release. The hybrid model was created as a strategic response to the impact of the ongoing global pandemic, particularly in the U.S.

In an increasingly competitive worldwide battle that has seen deep-pocketed streaming services trade gladiatorial blows, WarnerMedia has just made the single-most seismic shift in modern entertainment. This is the point where Dorothy unequivocally realizes she’s no longer in Kansas. Parent company AT&T has seen its stock climb in after hours trading following the announcement while shares of major movie exhibitors have fallen 15%.

In a first take analysis, much has changed and much has become clearer. In the immediate aftermath of this industry-shifting pivot, it’s only natural to be left scratching your head as you sort through it all. Here are the answers to the most pressing questions facing the entertainment industry as it takes its boldest step yet into the streaming revolution.

How did WB arrive at this point?

Amid the theatrical shutdown forced by the global coronavirus pandemic, film studios have been experimenting with different release strategies. This has coincided with WarnerMedia’s evolving movie strategy for HBO Max. At first, the company began by putting original movies that critics were less than fond of on the platform. Yet consumers did not respond to this lower-tier content.

Warner Bros. attempted to emulate Universal’s premium video on demand success with Trolls World Tour by sending the similarly family-friendly Scoob! to PVOD. But the studio did not follow that up with any other significant PVOD pushes, suggesting the results did not meet their internal expectations.

“They’ve narrowed their options and now they’re here,” David Offenberg, Associate Professor of Entertainment Finance in LMU’s College of Business Administration, told Observer. “They went all in and they can’t back out. Even if theaters are open and the economy is roaring in Q4 next year, they still have to release films day-and-date on HBO Max. It shows how they are refocusing the company and getting to a place to compete with Netflix.”

What is the strategy?

WarnerMedia CEO Jason Kilar and Warner Bros. CEO Ann Sarnoff have just made their intentions loud and clear for the foreseeable future. “It’s a huge marketing investment in HBO Max,” Offenberg said. “They’re putting their best films on the platform from Day 1.”

Mortal Kombat, In the Heights, Space Jam 2, The Matrix 4 and Dune—there will be something for every movie lover on HBO Max throughout 2021. Consumers will respond to an investment on this scale and it positions HBO Max for a powerful upcoming run after a softer-than-expected launch. But that isn’t the only reason WarnerMedia has changed directions.

On a global pandemic scale, the U.S. is in far worse condition than many other major box office regions such as China, where nearly all 70,000 theaters are fully operational. More than 60% of U.S. theaters are currently closed while international territories are faring far better. This move suggests that WarnerMedia doesn’t expect traditional domestic moviegoing to rebound to pre-pandemic levels until 2022. Only time will tell.

As we await stabilization, this new strategy enables the studio to release films overseas and tap into global theatrical distribution. Roughly 75% of the worldwide box office comes from non-U.S. markets, after all. For example, 2018’s Aquaman earned 71% of its total gross outside of the United States, while 2019’s Joker accrued 69% of its cumulative total overseas.

“The global box office is so big for these movies that WB can afford to take a haircut in the United States,” Offenberg said.

What does this mean for movie theaters?

Exhibitor chains are receiving a greater percentage of Wonder Woman 1984‘s theatrical gross in exchange for allowing Warner Bros. to break the traditional 60-90 day exclusive theatrical window. It’s safe to assume that the studio has reached similar deals with movie theater chains for their upcoming 2021 slate. But that is a short-term answer for a long-term question.

“Clearly, WB is throwing theater owners a rope. It’s just not clear if it’s a lifeline or a noose” Offenberg said. “It could be a great thing for domestic theater owners to get product into movie theaters. But if you’re putting that many great movies on HBO Max, and Netflix and Amazon and Disney+ are also feeding more movies, what’s left for exclusive theatrical release?”

One major question that can’t be answered now is how this shift will impact consumer behavior long-term. Once audiences have been given access to blockbuster films at home day-and-date with their theatrical releases, will they ever want to relinquish that freedom?

For now, this raises the floor of theatrical exhibition in 2021, guaranteeing a number of high-profile films will arrive in theaters rather than face additional release delays. While ticket sales are expected to be greatly depressed and the number of open movie theaters is shrinking (more than 60% of U.S. theaters are currently closed), some revenue is better than no revenue for chains that are able to operate.

How does Warner Bros. make money this way?

HBO Max and Warner Bros. are both under the WarnerMedia banner, which is owned by AT&T. Given the vertical integration, anything that is good for HBO Max very well could help Warner Bros. Ultimately, if HBO Max is successful in recruiting $15 per month from a few million new subscribers for billions of dollars in new revenue, it gives Warner Bros. the ability to create even more movies and shows. HBO Max’s potential success allows Warner Bros. to increase production and artistic vision and vice versa. And again, Warner Bros. will still reap all of the global distribution revenue from these theatrical releases as HBO Max is not yet available overseas.

Internally, rerouting Warner Bros. films exclusively to HBO Max or PVOD sells out the entire theatrical marketing and distribution divisions. Every major film studio has a massive army of employees dedicated to distribution and marketing. Creating a day-and-date release between theaters and HBO Max allows them to leverage these employees and utilize their expertise. It helps to prevent further sunken costs.

Does the talent lose money on box office incentives as a result?

Ultimately, this is about performance-contingent compensation (box office bonuses and profit participations), not base compensation. The studios work very hard to ensure the talent knows that contingent compensation is unlikely to materialize in the best of times. Robert Downey Jr.’s hefty $55 million bonus tied to Avengers: Endgame‘s back-end profits is the exception, not the rule. This new model further complicates an already tricky situation, forcing talent, agents, attorneys, and managers into an even tougher position from a negotiating standpoint. For example, some partners such as Godzilla vs. Kong producer Legendary were not even aware of WB’s forthcoming decision, per THR‘s Aaron Couch.(Warner Bros. has a talent-friendly reputation in Hollywood overall).

If the talent had good attorneys, their contractual language will cover all possible outcomes, such as a sale of a film to a streaming service at a market price. If talent representation did not argue for such protective language, then the talent aren’t entitled to anything (see: Chappelle’s Show).

The extent to which the studio is willing to renegotiate those contracts is questionable.  For instance, WB refused to pay Irwin Winkler a dime of back-end for Goodfellas, because of the original contract he signed. That is, the studio refused to pay him until he had leverage (Creed). Similarly, it’s possible that the studio will only renegotiate if the talent has leverage. WB will already presumably sacrifice mountains of short-term money in exchange for the long-term benefit to HBO Max with this deal. As such, they may not be jumping at the chance to pay talent even more at this time.

Is this the new normal for movie releases?

In WarnerMedia’s announcement, the company emphasized that this hybrid release model only applies to its upcoming 2021 movie slate and does not cover any films after next year. But Offenberg compares the situation to when Netflix lost the Starz content library in 2011. At the time, it was shocking and the company’s stock suffered in the immediate aftermath. But Netflix was able to rebound in a world largely bereft of streaming competition. Now, if HBO Max loses these day-and-date titles after consumers have embraced the new format, they won’t be able to seamlessly rebound given the fierce competition in the industry.

“I don’t see how they can possibly put the genie back in the bottle,” he said.

Including Wonder Woman 1984, Warner Bros. will release 18 films in theaters and on HBO Max over the next 12 months.

How does Warner Bros. benefit as the first-adopter of this aggressive strategy?

As of now, there are six major studios consistently releasing theatrical films: Disney, Warner Bros., Universal, Sony, Paramount, and Lionsgate. Sony can’t emulate this formula because it doesn’t have an in-house streaming service. Paramount has Paramount+, but they can’t generate nearly enough subscriber revenue to justify such a move, which is why they’ve spent 2020 selling off movies to Netflix and Amazon. Lionsgate is in the same boat with Starz. Universal has not positioned Peacock for such a shift and has instead found success with the PVOD model.

“The only studios that can do this is Disney with Disney+ and Warner Bros. with HBO Max,” Offenberg said. “History shows that in any market there can only be three dominant competitors. This helps secure WB and HBO Max’s position in that top tier of competition.”

Years of consumer surveys also support the idea of three winning platforms long-term. This move also has the added benefit of putting greater pressure on Disney to continue rerouting high-profile films to Disney+ such as Soul.

HBO Max has rapidly gone from punchline to power player with this new strategy. 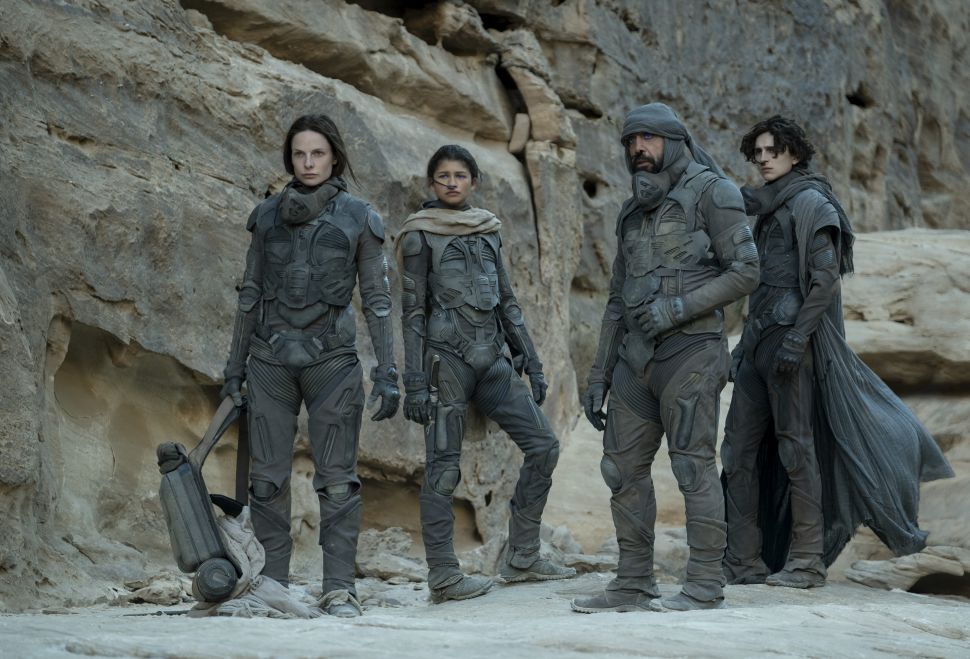