Quick sports analogy: with LeBron James leading the way, the Cleveland Cavaliers produced a regular season winning percentage of .663 from 2005-2010 while making the playoffs all five seasons. After James left the team following that run, the Cavaliers posted a dismal winning percentage of just .311 over the next four seasons before his return while failing to make the post-season in each year. The takeaway: losing a Hall of Fame MVP-caliber player can decimate your franchise.

We are hardwired to value top-heavy talent this way. Perhaps that explains why the conclusion of Game of Thrones last year elicited such widespread industry skepticism when debating the future of HBO. Consumer surveys at the time foretold of a catastrophic subscriber exodus that would upend the premium cable network. This after Game of Thrones had produced north of $2.2 billion in total profit over eight seasons and elevated HBO to new global heights. Such a cataclysm did not ultimately come to pass, but 18 months after GoT departed the airwaves, it’s worth exploring how HBO has managed without the biggest hit in its history.

To do that, we’ll look at HBO’s customer fluctuations, viewership and critical acclaim. Another category to consider is revenue and operating income, but that’s a topic for another day.

HBO has largely stopped using that 142 million global total figure in recent years and no longer includes Cinemax subscribers into its HBO customer count. Outside the U.S., HBO services are available in more than 50 countries and reach over 35 million subscribers, per their website. According to AT&T’s October Q3 earnings report, HBO and HBO Max boast 38 million U.S. subscribers between the two, which the company listed as an increase of roughly 10% over the first nine months of 2020.

Here’s how it looks as of August, courtesy of Entertainment Strategy Guy: 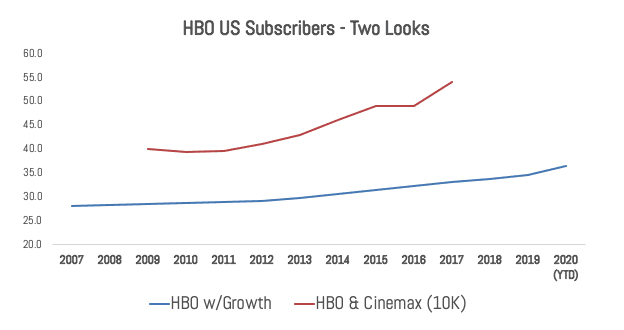 According to transaction data from ANTENNA provided to Observer in October, HBO boasted the most-improved annual growth rate among premium SVOD subscriptions with 27% in Q3 versus 11% in Q2, which may have been driven partially by the launch of HBO Max. ANTENNA data also revealed that HBO’s Q3 churn rate this year was more than Netflix, Disney+, and Hulu, but still better than CBS All Access, Starz, Showtime, Peacock and Apple TV+.

In terms of marketshare when it comes to U.S. premium streaming-video on demand subscriptions, HBO is the third-largest platform behind Netflix (35%) and Hulu (20%) with 9%, per ANTENNA. 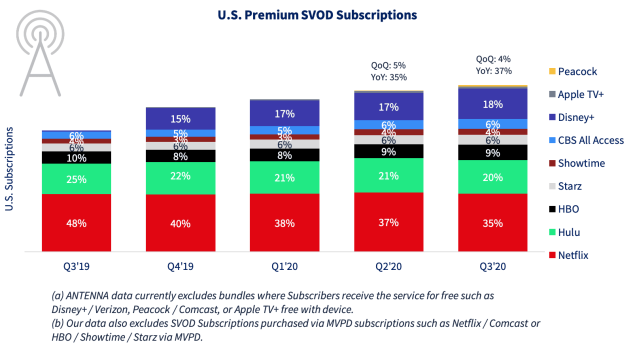 The lack of clarity makes it difficult to strike a firm count, especially when HBO Max’s growth is partially offsetting linear churn. But the main takeaway is that there has definitely been a downturn in overall subscribers since Game of Thrones ended. But as the third-largest premium SVOD service domestically, it’s not as deflating as it sounds.

Data provided by analytics specialist Sensor Tower to Variety in June 2019 claimed that HBO Now was able to keep 84% of the revenue from recent subscribers in the first billing cycle following the finale of Game of Thrones. Losing 16% of subscribers was worse than the 7% drop following Season 7, but it’s also a vast improvement to the 40% exodus after Season 6 concluded in 2016. After Season 5, there was a 22% drop. Admittedly, HBO Now (which surpassed 5 million subscribers in its last official count) represented just a sliver of HBO’s total business. Since then, the service has been folded into HBO Max. But the underlying retention optimism is worth keeping in mind.

The average subscription among leading streaming players lasts 31 months, according to data shared with NBC News last year by Parks Associates. If accurate, it suggests that while legacy HBO suffered a downturn following Game of Thrones‘ conclusion, those that have converted previous non-linear HBO subs are likely to stay within the ecosystem for a longer run.

Bottom line: overall subs are down over the last 18 months, but not to the critical level that many expected as HBO remains strong in the marketplace.

In its final season, Game of Thrones shattered HBO viewership records with a 5.17 rating in the advertiser friendly key 18-49 demographic (+8.5% season-over-season), 11.992 million live viewers (+17%) and upwards of 43 million multiplatform delayed viewers. There was simply no way HBO was ever going to replace the raw monolithic viewership totals with a single big budget home run swing. But a composite of quality can combine to be greater than the sum of its parts. On that front, with an extra $500 million tacked onto its annual content budget, HBO has continued to roll out successful originals.

The second season of Barry concluded the same night as Game of Thrones and is the highest-rated current HBO original (.65) in the key demo. The critically acclaimed sophomore run saw a 207% jump in the 18-49 demo season-over-season and a 172% spike in live viewership (1.6 million). Bill Hader has won back-to-back Outstanding Lead Actor in a Comedy Series Emmys while Barry has also notched Outstanding Comedy Series nominations for both of its seasons.

Big Little Lies Season 2 (June 2019-July 2019) is HBO’s second highest-rated series (.43) in the post GoT world. The Monterey Five delivered the premium cable network’s most-watched night of viewership in its finale in that span prior to Sunday’s finale for The Undoing (also created by David E. Kelley). Zendaya’s Euphoria (June 2019-August 2019) is the network’s youngest-skewing series with 40% of the total audience composed of adults 35 and under, giving HBO a new market. Season 1 averaged more than 5.6 million total multiplatform weekly viewers and made Zendaya, 24, the youngest Outstanding Lead Actress in a Drama Series winner in Emmys history.

The sophomore run of Succession (August 2019-October 2019) wasn’t a monster hit in live ratings, but did claim seven Emmys this year including Outstanding Drama Series. The show is now widely considered one of the elite dramas on television. Similarly, Damon Lindelof’s Watchmen (October 2019-December 2019) didn’t light the television industry on fire with live ratings, but generated nearly 7 million weekly multiplatform viewers overall. Importantly, it delivered HBO one of the largest digital audiences for a freshman series since the debut of Westworld in 2016. Amid rave reviews, it claimed an industry-leading 11 Emmy wins this year, including Outstanding Limited Series.

In 2020, HBO has strangely opted not to renew The Outsider (January 2020-March 2020) despite the fact that it was the network’s fourth highest-rated series (.25) and fourth most-watched overall in live viewers since GoT. The Outsider averaged more than 8 million multiplatform weekly viewers while its finale scored 2.2 million live viewers, earning the largest percentage gain (90%) from debut to finale of any HBO original in its first season.

Matthew Rhys’ Perry Mason reboot (June 2020-August 2020) has been renewed for a second season. The show concluded with a series high 1.1 million live linear viewers. The series saw significant growth throughout the season, tallying a 26% increase in viewership for the 9PM telecast and a 45% increase in digital viewing from premiere to finale night. The first episode earned roughly 9 million viewers across all platforms.

New horror drama Lovecraft Country (August 2020-October 2020) is HBO’s sixth most-watched show of the season. The show concluded its first season with a series high 1.5 million live viewers, with digital performance improving by 90% from premiere night. Since HBO is trying to funnel more viewership to HBO Max, it’s important to note that Lovecraft Country was the most-viewed HBO-branded series on Max prior to The Undoing. The premiere episode has notched more than 10 million multiplatform delayed viewers.

Speaking of The Undoing, the show is HBO’s first original series to grow consistently week-after-week over the course of its first season, per the network. It delivered a series high 3 million live multiplatform viewers Sunday night, making it the most-watched night of viewing for an HBO original since the Big Little Lies finale in 2019. Total viewing increased 43% from last week and more than doubled premier night numbers, while linear performance was up 42% from last week and up 168% from the series premiere.

President of programming Casey Bloys and the rest of HBO didn’t forget how to unearth buzzy new series just because Game of Thrones ended. The premium cable network has seen customers cancel their subscriptions in the wake of GoT‘s ending and, barring an unforeseen breakout of upcoming spinoff prequel House of the Dragon, it’s unlikely that HBO ever produces a hit on the same commercial and critical scale ever again. But HBO still has more estimated active U.S. subscribers than ViacomCBS, Amazon Prime Video, Starz, Apple TV+, AMC+ and Peacock. So let’s not act as if the end of Game of Thrones was some sort of death knell for the network. HBO is doing just fine.

Movie Math is an armchair analysis of Hollywood’s strategies for business and new releases. 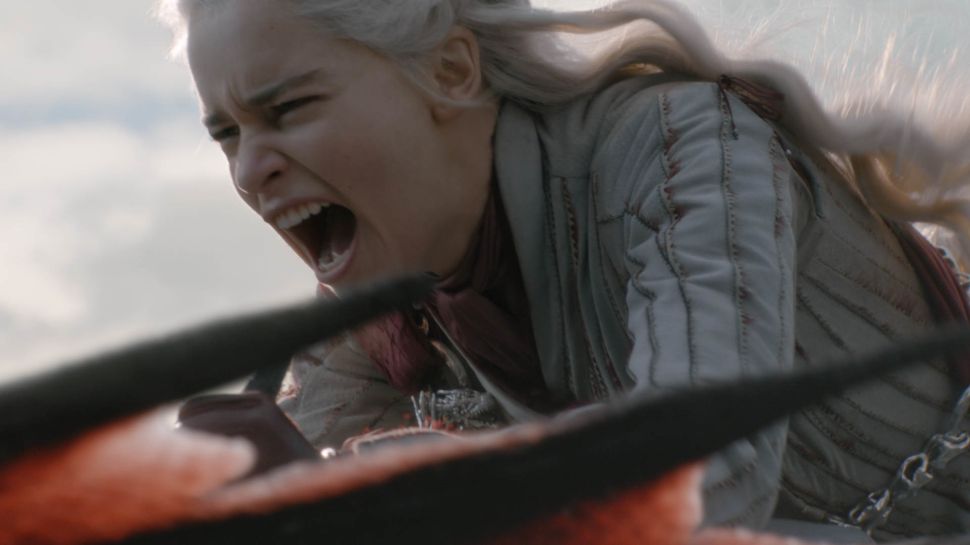