Bill Gates and Microsoft were the driving force behind modern computer software, ushering in the digital age in the 1980s and becoming, for a time, the world’s most powerful company. And somehow, while Gates was building an empire and enjoying his status as the richest person on earth, he was also quietly setting up what would become the second major focus of his life: philanthropy. And it is in part thanks to that work that the COVID-19 vaccine that is currently rolling out was achieved in record time.

In 1994, the same year he would marry Melinda French, Gates donated some of his stock in Microsoft to create the William H. Gates Foundation, named for his father. The foundation focused on tackling global health. Three years later, the Gates Learning Foundation was created, with the initial aim of expanding internet access in public libraries.

At the turn of the millennium, those foundations were combined and became the Bill and Melinda Gates Foundation as we know it today. At the same time, Bill Gates stepped down as CEO of Microsoft, though he would stay on in various roles until 2008, when he stepped away from day-to-day operations to focus on the foundation full time.

By this time, the Gates had amassed an incredible fortune and would go on to create The Giving Pledge, along with Warren Buffett, a commitment to give away most of their fortune. In their 2018 annual letter, Bill and Melinda Gates talked about why they’ve transitioned to philanthropy, and why they’re giving so much away. Namely that it’s fun and meaningful. They also discussed why they focus so many of their efforts outside the United States.

“We don’t compare different people’s suffering. All suffering is a terrible tragedy. We do, however, assess our ability to help prevent different kinds of suffering. When we studied the global health landscape, we realized that our resources could have a disproportionate impact. We knew we could help save literally millions of lives. So that’s what we’ve tried to do,” said Melinda Gates.

She went on to discuss the relatively low cost of health measures in developing countries, sometimes as low as a few cents apiece.

This philosophy within their foundation traces its roots back to an article that the Gateses read in 1997, which explained the dangers of unclean drinking in developing parts of the world. According to a World Health Organization report from June 2019, nearly one-third of the world population does not have access to clean drinking , and the economic cost of this challenge ranges in the hundreds of billions per year. And unclean supplies bring disease.

See Also: Here’s What Bill Gates Would Do About the Pandemic If He Were President

While improving infrastructure or introducing alternative sanitation solutions may provide a long term solution to diseases like rotavirus, vaccines can bridge the near-term gap. In 1999 the foundation invested $750 million in seed money to the Global Alliance for Vaccines and Immunization (GAVI) with the goal of providing rotavirus vaccines, among others, around the world. The foundation also invested in Rotavac, a rotavirus vaccine that hit the market at $1 per dose, significantly cheaper than existing vaccines. The low cost also pressured competitors to lower their prices.

Since 2000, when there was no rotavirus vaccine available, the number of children who die from the disease has decreased significantly.

The Gates Foundation does significant work in supporting prevention and long term infrastructure to minimize the impact of infectious disease globally, but their clear end goal is the total eradication of at least some diseases.

Eradication of individual diseases is admittedly difficult, but not undoable. To date, there is only one disease, in human history, which has been wholly eradicated: Smallpox.

Smallpox was especially virulent, with a fatality rate of about 30 percent. In the twentieth century, approximately 300 million people died of the disease. Even those who survived were left with scars or else permanently blinded.

Global immunization efforts eventually wiped out the disease. The last naturally occurring case was in 1977. Today, the disease exists only in two WHO laboratories, maintained for study. The eradication of smallpox, a disease that dates back at least to ancient Egypt, is considered the greatest public health accomplishment of all time. The Gates Foundation believes we can repeat the effort, and they’ve set their sites on Polio.

In the 1940s, Polio was rampant. While the vast majority of people who contract the disease—about 72 percent—will experience no symptoms, a smaller portion are severely impacted. In the ‘40s about 35,000 people were paralyzed or otherwise disabled by Polio each year. Owing to vaccination efforts, Polio has been effectively eradicated in the United States for more than 30 years. What was once a significant health threat is now gone. This is evidence of the success of public health efforts, but like many things, it isn’t equally distributed globally.

Today, Polio exists in only three countries and we have a better understanding of how it spreads, and vaccines at the ready. With any luck, we’ll eradicate the disease over the next few years. More importantly, the expertise gained by understanding the spread of diseases may help us with current and future epidemics.

Twenty years ago it might have been difficult to predict that Bill Gates would emerge as one of the leading forces in the global fight against infectious disease. Maybe we should have seen it coming. In the years before COVID, the most common usage of the term “viral” related to the spread of information online. The word “meme,” coined by Richard Dawkins in his book The Selfish Gene, described the way ideas propagate in much the same way as biology. Today, when we talk about viral spread, it’s almost always in reference to the daily case counts continuing to mount. Perhaps the transition from technology to biology was more natural than we supposed.

In any event, the Gates’s efforts in the realm of disease response clearly prepared them for the current moment, they saw something most of us did not. In 2015, Bill Gates held a Ted Talk in which he heralded a future pandemic for which, at the time, we were not prepared. Considering the daily news surrounding COVID-19, we never closed that gap.

The details of that talk are strikingly prescient. Over the course of eight minutes, he outlines a scenario terribly similar to the one we’re experiencing. One in which a disease with an extended incubation period allows for global propagation before we know what hit us. He describes the ways we were lacking in response readiness. Gates predicted a 50% chance of a global epidemic in his lifetime, a prediction he likely would have been happy to be wrong about.

Since the emergence of COVID-19, Bill Gates has been one of the most familiar public faces on the airwaves, and for good reason. This was the moment, without knowing it, the foundation had been preparing for.

In the months since COVID-19 hit, Bill and Melinda Gates have spoken with health leaders around the world, lending their expertise and money to the effort.  In late February, even before panic had really hit the states, Gates was on the phone with pharmaceutical executives discussing how to develop therapeutics and how to jumpstart vaccine research.

A recent additional commitment of $250 million brings the total Gates Foundation COVID-19 investment to $1.75 billion. The Gates Foundation usually focuses its efforts in areas lacking in response from local governments and global health groups, but COVID-19 presented a unique scenario for which, as Gates previously outlined, the world was not prepared. Gates was. He’d been warning us since the 2014 Ebola outbreak.

“In fact, if there’s one positive thing that can come out of the Ebola epidemic, it’s that it can serve as an early warning, a wake-up call, to get ready. If we start now, we can be ready for the next epidemic,” Gates said back then.

In 2017, Gates wrote an op-ed for Business Insider in which he outlined a potential scenario resulting in the deaths of tens of millions. To date, the COVID death toll is nearing two million. The Gates have remained consistent in their guidance that we must continue to invest in the infrastructure which will get us out of the current scenario and better prepare us for the next one, as well as their commitment to combating disease around the world.

Gates has indicated, while speaking with CNN the next four to six months could be the worst yet, as case counts continue to climb through the winter months, with as many as 200,000 additional deaths predicted. He cautions, however, that we have the ability to mitigate those deaths by diligently isolating and using masks.

Now that the vaccines exist, the next challenge is mass manufacturing and distribution. The Gates Foundation is making investments to scale up volume and distribution to roll out the vaccine more quickly. Gates made a point that vaccines should not be prioritized to the United States first, responding to recent comments from the Trump administration.

“Blocking international sharing and cooperation has been disruptive and a mistake during this entire pandemic. We need to ramp up the capacity of all the vaccines. There will be some additional ones approved in the month ahead that are easier to scale up the manufacturing. The U.S. has benefitted from other country’s work here and we shouldn’t be entirely selfish in how we go forward.”

He went on to say that vaccines should also be distributed based on medical need, without consideration of economic status. “It should be based on medical need, not wealth at all. After all, this epidemic has been awful in the way that it’s exacerbated inequities. It’s been worse for Hispanics, worse for Blacks, worse for low-income service workers, multigenerational households. A number of things that mean that, in terms of picking who gets the vaccine, we better be using equity to drive all those decisions.”

There is some light at the end of the tunnel, according to gates. He believes by summer 2021 the United States could be close to back to normal, though some impact will remain even into 2022 until such time as the vaccine is adequately distributed worldwide. The call to action now is to do everything we can to mitigate the impact of the coronavirus over the next four to six months and take the lessons learned to better prepare for the next epidemic. Because, according to Gates, there will be a next one. 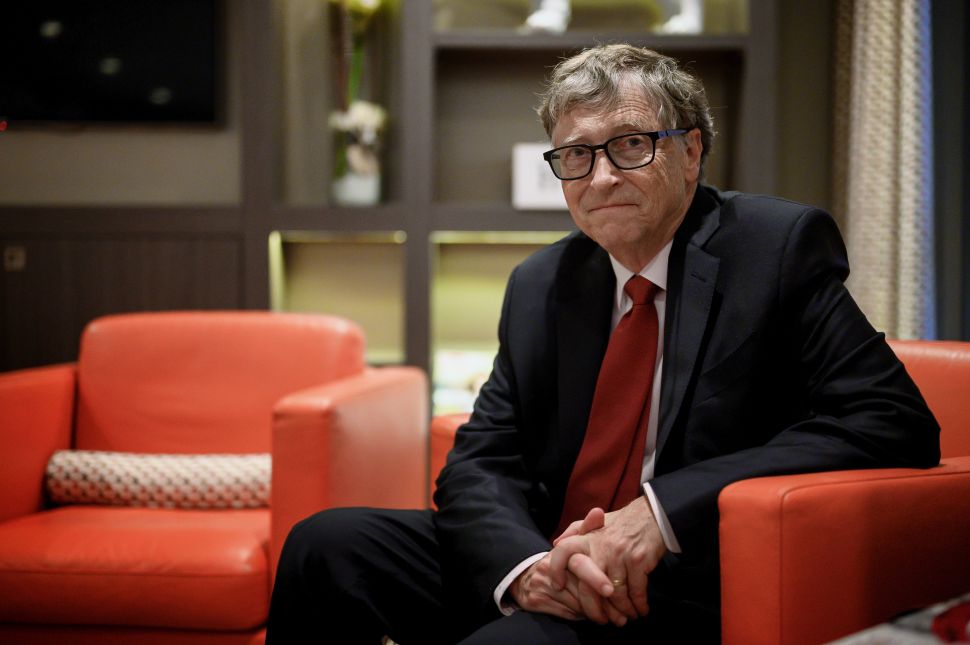