Some scientists have long believed that there may be a ninth planet, or “Planet Nine,” orbiting the sun from the edge of the solar system (and no, it’s not Pluto). A new observation of an exoplanet in a remote star system offers clues that may help us verify that hypothesis.

According to a study published in The Astronomical Journal Thursday, the Hubble Space Telescope discovered a giant exoplanet, or a planet outside the solar system, orbiting a double-star system 336 light-years away from us that could be very similar to Planet Nine—if it exists.

The mysterious planet, named HD106906b, is 11 times the mass of Jupiter and orbits around its two host stars from a distance of 67 billion miles, or 730 times the distance from Earth to the sun. From that far out, it takes the exoplanet 15,000 Earth years to complete one orbit around the pair of stars.

Scientists have known the existence of HD106906b since 2013 when it was discovered by the Magellan Telescopes at the Las Campanas Observatory in Chile. But it was through the latest observation that researchers were able to determine its orbit, because the Hubble telescope provided accurate measurements of the planet’s movements over a 14-year period.

The double-star system is only 15 million years old, scientists say, and is surrounded by a dusty disk of remnants left by the formation of the central stars and orbiting planets. Astronomers have studied this system for 15 years because they think planets could be forming in this disk.

The solar system has a similar dusty disk known as the Kuiper Belt beyond Pluto. Astronomers have observed strange orbits of some celestial bodies and dwarf planets from this area. And some believe that the cluster and some of its unusual movements are caused by a hidden planet nearby that’s about 10 times the size of Earth and moves along an eccentric orbit.

“Despite the lack of detection of Planet Nine to date, the orbit of the planet can be inferred based on its effect on the various objects in the outer solar system,” Robert De Rosa, the study’s co-author and an astronomer at the European Southern Observatory in Chile, explained in a statement. “This prediction of the orbit of Planet Nine is similar to what we are seeing with HD 106906b.”

Researchers say that HD106906b was likely born closer to its host stars and got kicked away by the double stars’ gravitational force. But if another star passed by, it would have kept the exoplanet in the system rather than wandering off.

A similar process could have happened to Planet Nine, where it formed near other planets in the solar system’s early years and was knocked out by Jupiter’s massive gravity. And then the gravitational pull of a passing star nudged it back into an orbit in the solar system.

“We are slowly accumulating the evidence needed to understand the diversity of extrasolar planets and how that relates to the puzzling aspects of our own solar system,” another study co-author Paul Kalas, an adjunct professor of astronomy at the University of California, Berkeley, said in a statement. 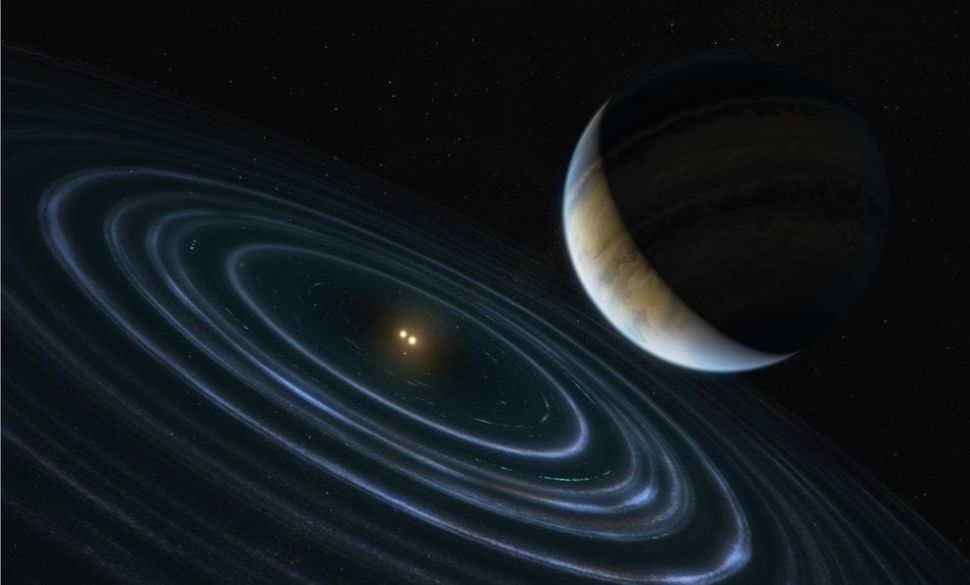