We’ve spent four years bedeviled by a gold-worshipping misanthrope (who, unlike Ebenezer Scrooge, will never mend his ways)—who wants more? Well, it’s the holidays, and curling up with some version of A Christmas Carol may be a tradition in your house. Do you binge the classic versions—Magoo, Muppets, Albert Finney—or look for something new? If the latter, I must recommend Jefferson Mays’ virtuosic and surprisingly emotional one-man show, captured on video and digitally enhanced for quarantine audiences.

Produced in 2018 at L.A.’s Geffen Playhouse, this blend of chameleonic craft and scenic dazzle was directed by Michael Arden and designed by Dane Laffrey, and proudly wears its stage origins in present form. At the top, curtains part to reveal a casket (Jacob Marley’s, naturally) and, 90 minutes later, close on a cemetery in winter. In between it’s a miraculous pageant of possession and ventriloquy, one actor embodying all the sights, sounds, smells and mystery of Dickens’s timeless fable. If the bookending images insist on death, the author was urging readers to make the most of their lives by loving and helping the needy; you can’t take it with you. As American pandemic deaths creep toward 3,000 a day, we are keenly reminded that greed and selfishness breed tragedy.

Performing a necessarily abridged but faithful version of the book, Mays is magnificent. Effortlessly donning and doffing personae, he fleetly juggles narrator, Scrooge, ghosts, all the Cratchits, and dozens more, bringing whole feasts and parties to life with bustling color and details. Anyone who saw him on Broadway in I Am My Own Wife or A Gentleman’s Guide to Love and Murder already knew Mays to be a master purveyor of polymorphous perversity. Although American, he is a specialist in English caricature, all genders and classes: Cockney geezer, posh toff, prig, git, twit, nob, tosser, as well as decent, chipper chaps. He’s a walking explosion of Max Beerbohm sketches and British dialects.

Since the central performance is so warm and dynamic, it’s almost gravy that the visuals are so engaging. In the opening scenes—the miserable Scrooge in his mausoleum of an office and then making his way home to a lonely apartment—the stage is swaddled in shadows and gloom, relieved only by a candle here or there (outstanding mood setting by lighting designer Ben Stanton). But with the grisly, sickly blue arrival of Marley and the three spirits who guide Scrooge through past, present, and future, the space blazes with brilliant color, set pieces, and video. The giddy Christmas party at Fezziwig’s is augmented by projections of dancers (designed by Lucy Mackinnon); when the Ghost of Christmas Present parts his cloak to reveal the twin urchins Ignorance and Want, their digital avatars caper grotesquely on a scrim. The cinematography (by Maceo Bishop) and CGI garnish are never intrusive, never competing with Mays as the engine of the narrative.

That iconic plot and dialogue have been recycled so many times, you may think nothing can surprise you in a new version. And yet, Mays (who adapted the book with Arden and Susan Lyons) finds fresh corners to inhabit and illuminate. Not many films of A Christmas Carol have given each member of the Cratchits’ humble household such personality and distinction, nor has the party thrown by Fred (Scrooge’s jolly nephew) seemed so festive and bright. Mays revels in the source material’s crowds and mobs and lists, he loves the promise of plenitude and too-muchness of Dickens, as when he enumerates (verbatim) this orgiastic inventory of dishes surrounding the Ghost of Christmas Present: “turkeys, geese, game, brawn, great joints of meat, sucking-pigs, long wreaths of sausages, mince-pies, plum-puddings, barrels of oysters, red-hot chestnuts, cherry-cheeked apples, juicy oranges, luscious pears, immense twelfth-cakes, and seething bowls of punch.” Mays contains multitudes, and he gives multitudinous pleasure.

We shall see if his generosity as an actor is matched by liberality among ticket buyers. The enterprise, budgeted at a reported $3.7 million, would have to sell 74,000 to make back its production cost. A percentage of the profits will go to a coalition of about 57 regional theaters who are promoting the event. Beneficiaries range all over, from Vermont Stage to Pittsburgh Public Theater to Geffen Playhouse. If each company can deliver an average of 2,000 or so audience members, profit may be had. For many, A Christmas Carol is a seasonal cash cow. I’ll be curious to see if this model works: manageable overhead, online distribution, big niche market. I hate to sound like a cold hearted capitalist, but the theater can afford to be a little Scroogey when it comes to survival. 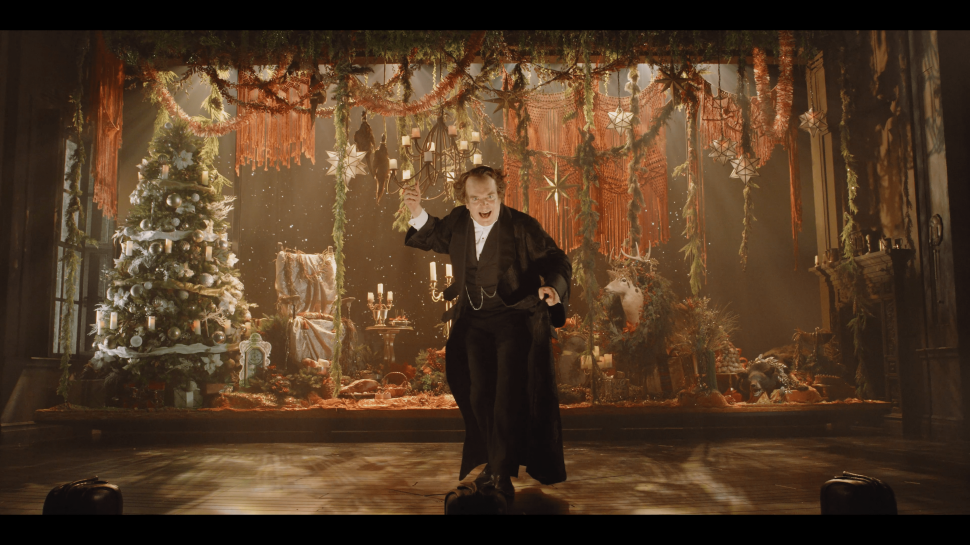